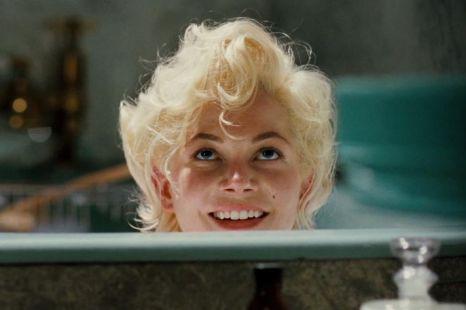 
My Week With Marilyn tells the story of the filming of The Prince and the Showgirl as recorded by Colin Clark, the young third assistant to the director. The Prince and the Showgirl brought together two of the greatest acting legends of the time, but what everyone seemed to consider a gift-wrapped success actually turned out to be a production nightmare. Laurence Olivier and Marilyn Monroe clashed both in terms of personality and acting style, bringing out her insecurity and vulnerability and his pomposity and bullishness.

The choice of Kenneth Branagh to play Sir Laurence Olivier is amusing in its appropriateness. Having modelled himself on Olivier and having spent his early career trying to convince people that he was the new Laurence Olivier, Branagh was, in a sense, the ideal candidate for the role. Though there may be the odd accent slip, overall Branagh is superb as Olivier, mastering his manner of speech, his bearing and his extreme arrogance. But as an actor Olivier also had a presence which was part of him and not something which can be duplicated merely by mimicking his actions and speech.

But if Olivier had presence, Marilyn Monroe had magnetism. Michelle Williams is excellent as Marilyn Monroe, alternating between the recognisable on-screen sex symbol and the less familiar off-screen tortured soul. But like Branagh’s Olivier, Williams’ Monroe is missing that extra innate spark which turned a pretty actress into a screen goddess.

We cannot blame the actors for being unable to replicate that which is incapable of being faked, but this inability nevertheless deflates the story of its power. The greatest actor of his generation has a vile temper, but all we really see in the film is an irascible Englishman. The most famous, most desired woman in the world has no sense of self-worth because she is relentlessly manipulated by those around her who see her only as a ‘cash cow’; in the film we see all the manipulation but none of the greatness. Much of the story’s strength relies on the dichotomy between Marilyn Monroe’s on- and off-screen personalities, so the film is greatly weakened by the fact that Marilyn Monroe is played by anyone apart from Marilyn Monroe.

Eddie Redmayne stands out as the young Colin Clark, but he has an easier time of it, perhaps, than the other two because he can be his own character without any expectations from the audience about whom they are going to see. Colin’s story is fairly superficial, his dominant role being that of observer, foreshadowing his later career as a documentary filmmaker.

Watching the film is almost a surreal experience because it focuses on characters who are icons of the big screen. They are so well-known that some viewers will find it distracting to watch actors who don’t quite look like their real-life counterparts. And even if we are able to suspend our disbelief, there is something strange about watching actors recreate parts of a performance – not just the same script, the same dialogue, but the exact performance – a performance any of us could easily see for ourselves. It makes one wonder about the suitability of film as a medium for telling stories about the history of film.

My Week With Marilyn is entertaining and enjoyable to watch, and if it renews an interest, or at least a curiosity, in the talents of Olivier and Monroe, it can be counted a success and well worth the time it takes to watch it.


My Week With Marilyn' Theatrical Trailer