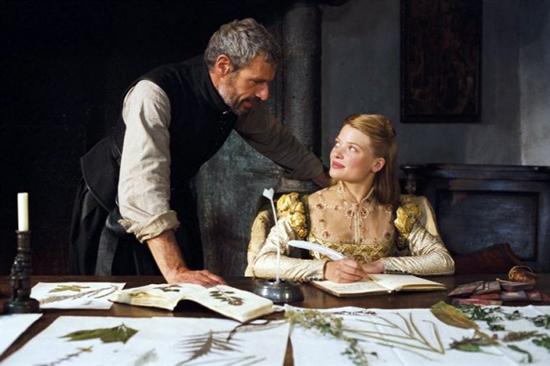 If you have seen any of the trailers for The Princess of Montpensier, you have most likely been misled into thinking that it is a passionate love story, but it is much, much better than that. It is a story about human passions and human weaknesses, set during the tumultuous 16th century in France, where armies are constantly coming into conflict over the question of religion and women are pawns in the great game of social advancement. Bertrand Tavernier presents us with a sumptuous vision of this period, using castles and costumes to full effect and offering plenty of swordplay and galloping horses, all underpinned by a stunning score, which while modern is reflective of the period in which the film is set. The Princess of Montpensier is a feast for the eyes and ears.

The film is based on a novella written in the 17th century by Madame de Lafayette; in the original version, although we get a sense of the characters and what drives them, they remain relatively superficial. In adapting this story for the screen, the writers have remained faithful to the original while giving the characters more substance and creating an altogether richer story which, while less overtly moralising, still respects the sensibilities of the original.

The story centres on the eponymous heroine Marie, Princess of Montpensier, played to perfection by Mélanie Thierry, who portrays her with such genuine sweetness and innocence that it would be a hard heart indeed that did not love her. Although forced to marry one man while loving another, she is happy and willing to settle into her new life as Princess of Montpensier in the country. When she comes to Paris, however, her lack of experience and cunning leave her vulnerable to the scheming and intrigues at the French Court, and she has not the necessary strength to endure the continual assault of dangerous temptations and the accusations of a jealous husband.

Around Marie circle four men: her husband, who wants to love her and be loved by her but who hardly knows her and is consumed by jealousy; Henri de Guise, who desires her and claims an old affection; the Duke of Anjou, who also desires her but sees his rivals all too clearly; and the Count of Chabannes, who truly loves Marie. The film focuses on Marie’s struggle between duty and pleasure, between what is expected of her and what she believes will make her happy, but it also explores the relationships of these four men with Marie and with one another. In doing so, the film becomes a study of the destructive nature of uncontained human passions: of lust, greed and jealousy.

The most intriguing character is the Count of Chabannes. He alone of the major characters is above the age of 25. He is the voice of experience and of wisdom; he is a man of learning and also a man of feeling. He abandons the battlefield where Frenchmen kill each other and commit horrible atrocities in the name of God over a difference in faith. He is viewed with suspicion and resentment by both sides, but he never compromises his principles. Taken under the protection of his old student, the Prince of Montpensier, he then becomes tutor to the Prince’s wife. Whereas the other men treat Marie like a possession to be guarded or a prize to be won, only Chabannes really knows her and loves her, never expressing any desire for her but always working with her best interest in mind.

Chabannes’ character is given much more attention in the film than in the novella, and the benefit to the film is inestimable. He is transformed from a stock character (the nice guy) into a real person with a lively intellect and a quiet strength. But he also acts as an intermediary between the story and the audience. The film opens with Chabannes’ desertion (a detail in which the film differs from the original story), displaying a sensitivity more in tune with a modern audience but not necessarily out of place in his own time. He leads us into the story, and it is through him as he teaches the Princess that we understand the sort of world in which they are living. He helps to make this different culture more accessible, giving us a greater appreciation for the story and its characters.

Above all, The Princess of Montpensier is an excellent film. It combines skilful performances, a careful script and masterful direction to produce a story which both entertains and edifies. It immerses us in the world of the 16th-century French aristocracy and tells a very recognisable and, ultimately, a very human story.

Stations of the Cross: 6. Veronica wipes the face of Jesus