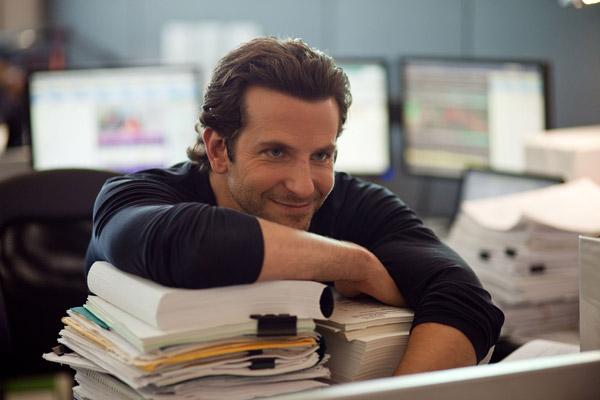 
Eddie Morra is a failure. He has an idea and a book contract but has yet to write a single word. His girlfriend has just dumped him, and in case we have any doubts about his loser status, he has long, unkempt hair and lives in a pigsty. Into his life returns his drug-dealing ex-brother-in-law, who offers him NZT, a drug which will give him access to 100% of his brain's memories and abilities.

I should have been warned by the shoddy characterisation. Eddie is not just experiencing a rough patch; we are supposed to believe that he has never had any kind of success or shown any sign of promise, but we should also believe that he has a book contract with enough of an advance that he doesn't need another job. We are also told that he is depressed but are shown only laziness and slovenliness, though this is perhaps a sad sign of the general misunderstanding of depression.

One of the biggest turn-offs of Limitless is the obtrusive first-person narration. Film is an extremely versatile medium. With good direction, good camera work and good actors, which Bradley Cooper and Robert De Niro undoubtedly are, any story can be told, any emotion expressed. The first rule of good storytelling is ‘show, don't tell’, and film is particularly suited to this. Is a picture not worth a thousand words? Narration is an important weapon in the film maker’s arsenal, but one that must be used with skill and sensitivity. Narration must never, ever be used to explain the film to the audience. In Limitless, Eddie Morra constantly hampers the flow of the film with pointless explanations. He explains the emotions he feels, which we already see in Bradley Cooper's face. When his girlfriend makes a vague reference to his first marriage, the scene is halted, so the history can be explained, yet within five minutes, we are meeting his ex-brother-in-law and learning about Morra’s ex-wife.

But despite the poor characterisation, the narration and the dreadful dialogue, I clung hopefully to the great potential of the idea of a drug which enhances mental ability and the promise of a thriller given in the trailer, and the film was nearly over before I was finally convinced that I was watching a dud.

Limitless is a great disappointment. It had the potential to be a gripping thriller, but every frightening situation is quickly and easily resolved. The storyline of a drug which increases brain power but has frightening side effects is one with great scope for making its audience think. What responsibilities come with a person’s gifts? Is it right to take drugs to give yourself a competitive edge? Are drugs dangerous? How far can we judge the consequences of our actions? And above all: What would you do? These are all questions touched on in the film, but they are never carried through to any reasonable conclusion, and coming away from the film, I was left pondering only one question: What was the point?

Limitless starts with an idea of huge potential, but due to poor scripting and a lack of commitment, it fails to deliver. What could have been an intelligent thriller is reduced to a dull, scarcely believable drama which takes itself far too seriously.

iWitness: Prayers for the players