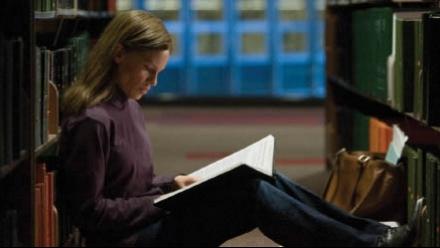 
Conviction lies in the middle of the tangled web that any film weaves for itself when it claims to be based on a true story. The true story in this case is that of Betty Anne Waters (Hilary Swank) who, following what she believed to be the wrong conviction of her brother, Kenneth ‘Muddy’ Waters (Sam Rockwell) for a murder in 1980, devoted the subsequent 20 years to putting herself through college and law school, becoming an attorney and taking on his case to prove his innocence.

The tag ‘Based on a True Story’, whenever it is attached to a film, is both a blessing and a curse in equal measure. On the one hand, it magnifies the emotional response of the viewer, who will take more delight in the happy moments or cry that little bit more at the moments of tragedy, because they really happened; who will lose or gain more faith in humanity based on the achievements or mistakes of the protagonist, because someone really reached those heights or depths.

The authenticity that the tag grants to the plot is obvious, and there are still other perks to the genre: to some extent, when the tale is one of suffering, any criticism thrown at the telling of it seems pedantic and unnecessary – not a watertight excuse on the part of the filmmakers when they come under fire, but something that might be at the forefront of a would-be critical reviewer’s mind. The grounding in reality also grants something of a carte blanche to gloss over the more mundane parts of a story – ‘we don’t need to bother factoring the logistics into the plot too much, everyone knows this must have been able to happen because it did happen.’

The story of Conviction, or the plot at least, is simple – which leads me to believe that the temptation to shortcut the finer details, not only of Kenny’s case but of the characters’ lives, was succumbed to. No answer is offered to the obvious question of how a single mother (Betty Anne and her husband, who is frustrated by her obsession with Kenny’s case separate) financed herself through years of study, while maintaining a seemingly adequate lifestyle for her and the two sons who are initially in her care. And these teenage boys, aside from one expression of annoyance at a cancelled fishing trip and one remark about how their mother has sacrificed her whole life, seem to be remarkably understanding about and trusting in Uncle Kenny, whom only one of them has met and even then it was as a few-month old infant.

The challenges presented by the truth of a film’s story are unavoidable. The trouble with most good, true stories is that they have been told before and we know how they end, meaning that producers have to work that little bit harder to infuse the climax with any kind of suspense – nobody was all that surprised, for instance, when Hitler didn’t die in Valkyrie, and so the real story of the film had to lie elsewhere. Even the stories that have not been so well recorded in the annals of history, as soon as they are labelled as true in their celluloid incarnations, canonise their subject matter and publicise the story and of course its ending. Coupled with but somewhat antagonistic to this challenge, is another: with the representation of history, of lives lived, comes a responsibility on the part of those involved to be fair and true to those who lived them. Accusations of exploitation, trivialisation or mockery are all too easy to fall victim to if obligations to the truth are not upheld.

As a story, Conviction doesn’t overcome this first challenge. It doesn’t really break the mould; there aren’t any unpredictable twists or edge-of-your-seat moments, but maybe that’s not such a bad thing if it allows the film to rise to the second challenge, which it does well, through the performances of Swank and Rockwell (with a notable supporting role for Juliette Lewis). This really is a character study of a tenacious woman, that niche that Swank has come to fill so well, and so the story, simple on the big screen but anything but in the real world, is rightly not used to overshadow the personal journeys that it documents. The moments of triumph, where they come, are quiet, unaccompanied by any fanfare; the setbacks, too, are portrayed as stumbling blocks in Betty Ann’s path, rather than as craters in the landscape of the story. A moment of redemption between Kenny and his daughter is subdued and awkward, devoid of the syrupy over-analysis that could so easily have accompanied it, and rightly so – to do otherwise might have been to present Kenny as a thoroughly good man, which, for all his charm, he is not. All of this makes for a sensitive, but not overly sentimental telling of the story, but not the epic film which always exists as a latent possibility in a story of this nature.

But maybe in this film’s simplicity lies its strength. We know how films about the pursuit of justice tend to work: the grandstanding of the courtroom, the feisty protestations of innocence, the underdog beating the corrupt system. Such films serve a great purpose: in their embellishment, they allow us to appreciate the triumph of the human spirit that exists wherever these victories occur in real, unscripted lives, like those of Betty Anne and Kenny Waters. G.K. Chesterton wrote of fairy tales that they ‘say that apples were golden only to refresh the forgotten moment when we found that they were green. They make rivers run with wine only to make us remember, for one wild moment, that they run with water.’ Conviction may not have the enchantment of a golden apple; however, its story is one of the green apples that may taste a bit bland in comparison, but of whose value we do well to be reminded.

The raising of Lazarus