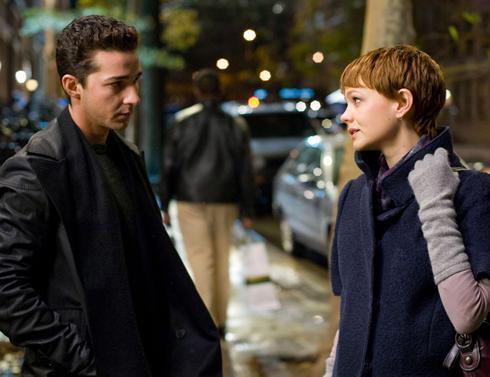 
Is Greed Good? It may have been the name of the book that Gordon Gekko (Michael Douglas), recently released from prison, is trying to sell, but director Oliver Stone is immediately confronting the viewer with the challenge to question our belief and faith in the cathedrals of greed. The big glass houses that sprawl over the screen in the opening sequences drip wealth and soulless puddles of economic pain.

Stone sets the scene before it all went wrong and only the insiders on Wall Street knew their subprime from their prime time. As a viewer we know all the time what is about to happen, but try as he may Stone never really convinces us that the Wall Street brokers have learned that greed is bad. Rather he delivers a mixed message of greed can be good depending on what it is trying to do. He leaves Gekko to constantly deliver clever one liners that leave everyone else on the screen wanting. The line ‘Greed is Good and now its legal!’ will raise a smile before we are hit with Gekko’s attempt to place him in the present with the reality that the real Weapon of Mass Destruction is credit rating. Not sure.

The over reliance by Stone to swirl his camera and swoop across the silver screen has been done too often. The glitter of numbers flashing across bemused faces to demonstrate that no-one really knows what the numbers mean all go to serve that who really does know what is going on? He consistently uses a dinner table for soul searching and character analysis. He did it in JFK and he is doing it again. He needs to move on.

The message of the film is clear but there is a story in there trying to spit itself out like a debit card from an ATM. Gekko having been released from prison is giving speeches to promote his book, in the audience is a high flying Wall Street investor Jake Moore (Shia LaBeouf) who has more than a passing interest in what Gekko has to say. Actually his real motive is to introduce himself as the man who is going to marry his daughter Winnie Gekko (Carey Mulligan). Winnie is a left of centre blogger who has visions of a world that uses alternative energy and embraces values and self-respect. Clearly she has never read her father’s book. Frankly, she could never really have even met her father. They are just too far apart on the spectrum. When they meet on screen, it does not work and she often storms off. Jake comes across as a scammer with a conscience and you just know that as he locks horns with the alpha males in the room he is just a good guy at heart. There is a ludicrous scene where he has a race on a motorbike with a fellow stockbroker to see who truly is the alpha male in the wide open spaces far away from Manhattan. It has to be a Ducati of course and it has to be red. Stone should have just unzipped their trousers and be done with it.

The youthful enthusiasm and growing confidence of Jake finally meets its match with the laser precision of Gekko’s insight and speculation whilst using his daughter’s inheritance – surely Stone could have thought of a different source of income? The bad guys are the Brits in London of course, our pin striped boys are easy targets but the saviours are seen as the Chinese, carefully crafted as wise, prudent, loaded and no mugs. Jake demonstrates his understanding of the Chinese with more than a nod to HSBC adverts that Stone must have watched in a London hotel whilst on his travels. At times you wish to bring the bard into play and call a plague on all their houses.

As a film it entertains but fails to nail the laden message that we are in a bubble and have been for years. In fact the references to bubbles at the beginning and end of the film through the eyes of children was at best schmaltz and at worst crass. The real winner of the film is Michael Douglas. But it is only when Gekko remonstrates that he is back that we know he is trying to emulate Paul Newman in the Colour of Money. In particular the scene when he turns to Cruise and says, ‘Listen kid, I’m back’ while potting the black in the top corner. That was great cinema and the Hustler went on to win his only Oscar. Douglas should not win an Oscar for this performance, but he will come close. But he does remind the viewer why he won it in 1987 for the original role. Is there anything America loves more than the comeback kid? In the end the film does nothing to reassure us that anything of substance will change. The worst line in the film is, ‘it’s not about the money, it’s about the game.’ Many viewers watching the screen do not believe they are living in a game and that greed has had a devastating impact on their lives. Stone had an opportunity and he missed it. Too much reverence served to Douglas and the quiff and not enough to values and the consequences of money and greed. Is Douglas Good? should have been the title. He is indeed.

Humanism and Faith in Christ