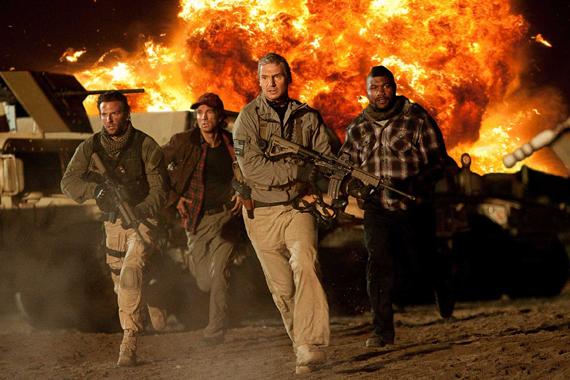 
‘Overkill is underrated,’ purports Col. John ‘Hannibal’ Smith during the execution of his messianic plan to protect the American nation and its precious currency which is at threat, as is his reputation as the leader of the US’s finest covert faction, The A-Team. It is, I think, fair to say that this questionable mantra is one that pervades Carnahan’s pathetic remake of a cult TV show, and Hollywood hyper-budget movies generally.

Here we have it: John ‘Hannibal’ Smith (Liam Neeson), Templeton ‘Face’ Peck (Bradley Cooper), Bosco Albert ‘B.A’- bad attitude, Baracus (Quinton Jackson) and finally H.M ‘Howling Mad’ Murdock (Sharlto Copley). The multifaceted A-Team are here to save the day! No job too big! They are back to reclaim from a group of Iraqi insurgents the US treasury plates used to manufacture billions of pounds of counterfeit currency. Against the advice of Charissa Sosa (ex-girlfriend of the film’s Don Juanian poster boy, ‘Face’) and Military leader General Morrison (Gerald McRaney), the A-Team take up the task of tracking down the plates. Whilst retrieving the key to the American dollar, amidst a glut of special effects, the plates are again stolen and the A-Team are charged as mercenaries having breached the US’s military code of conduct. Morrison, the only legitimate personnel who can corroborate their story, is, it seems, killed by rival faction, Black Forest (the actual plate thieves), giving way to the team’s ten-year sentence in separate high security prisons.

Of course, the ensuing escape scenes are depicted with such subtlety and precision I had to double check that Joe Carnahan was not in fact a 14-year-old boy masquerading as a film director. Whilst the audience can probably recognise that the violence is, to a certain extent, a self-knowing parody of the excessive violence of the original, it still seems cheap, boring and overdone to watch a gas canister being exploded and filmed by some high-tech, 50 trillion mega pixel camera reserved for Hollywood’s mega budget films. Even though Frank Lupo and Stephen Cannell’s original version of The A-Team is fondly remembered for its overt use of catchphrase and comic use of excessive violence, I think it would be of too much of a credit to the film to say, ‘oh it’s just a bit of fun.’

Following their escape from prison, Smith and his renegade mercenaries are pursued by Lieutenant Sosa (Jessica Biel) after she and the American military now suspect the A-Team of working in conjunction with Black Forest led by the dastardly and aptly titled villain, Brock Pike. Here’s where the supposed ‘fun’ really starts. Exploding cars, tanks being flown via parachute and gunmen abseiling down skyscrapers amidst a slew of poor jokes and cheesy dialogue – this is what it is now deemed a filmic experience apparently. This may seem harsh and maybe the number of explosions are integral to the film’s plot. Except… the actors are not exactly exuding wit, charm and charisma by the bucket load either. Liam Neeson’s incongruous portrayal of the husky, cigar munching, rock eating Col. Smith had about as much comic timing as a maimed goat; maybe I’m being harsh – it is possible he needed a free holiday in these turbulent financial times.

Yet the real highlight of the film comes when human bone cruncher B.A Baracus flirts with Gandhi for beginners following his stint in prison. He muses thoughtfully: ‘Victory attained by violence is tantamount to defeat, for it is momentary’.

But of course bonehead violence has the last laugh when Smith implores Baracus that bludgeoning evil masterminds on the head is in fact justified by decontextualising Gandhi even further when he reels off a quote that sounds like it came off the back of a matchbox he uses to light his Cuban cigars: ‘It is better to be violent if there is violence in our hearts, than to put on the cloak of non-violence to cover impotence.’

After this foray into pop psychology the gang find themselves in possession of the plates but must still prove who the real thief is. This culminates in an elaborate fireworks display where we are expected to cheer on the uncharismatic ‘Face’ as he finally uses one of his two brain cells and lures the actual villain of the film into the hands of the US military.

It’s easy to criticise films for having too many explosions. However, it seems that all Hollywood films (and yes even critics’ darlings such as Inception are guilty of this) must have a mandatory number of whooshes and bangs in order to make it onto our cinema screens. Whether this is the fault of the industry that created the aforementioned demand or the public who need to have their senses obliterated by exploding monster trucks to enjoy a film remains to be seen. What’s more, with a sizeable budget and the talent of actors such as Neeson at its disposal, it’s a shame that The A-Team has relegated itself into the annals of mediocrity rather than fostering itself into a witty and successful adaptation of its televisual counterpart.