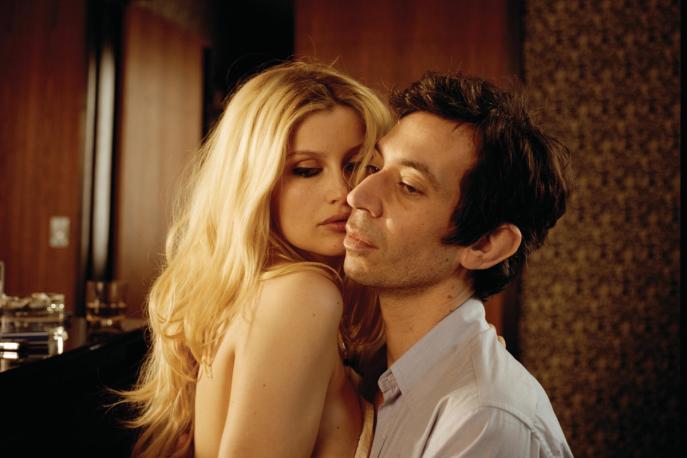 
Gainsbourg is not a linear biopic, but one enriched by fantasy. It gives us an insight into the character of one of the world’s most famous pop musicians.

The child Lucien Ginsburg (his name before adopting the aforementioned stage name) naturally gravitates towards the forbidden, drawing illicit pictures, and smoking cigarettes; a reaction perhaps to his strict Jewish upbringing.

His father teaches him the piano, but doesn’t play the classical repertoire quite to his father’s expectations. He also takes an active interest in his son’s career progress, despite not being a fan of popular music; he is clearly very proud of his son. Gainsbourg clearly cares a great deal for his mother and father, whom he visits regularly, even at the height of his success. As his life progresses, they seem to be his only remaining anchor to the boy Lucien, to the dreams and joys and sensitivities of his youth. He grieves badly after his father’s death, engaging in self-destructive behaviour along the way.

He grows up in Nazi-occupied Paris, and French anti-semitism has a defining effect on Gainsbourg’s character, as it will later on his music. He seems to feel like a bit of an outsider from a young age, but not in a negative way, feeling more like he was special by virtue of being different. He lines up for his yellow star, and boldly wears it as a sign of pride. Later on, we see that he never quite conforms, but always sits some place between belonging and not wanting to.

He starts out playing in the clubs as a backing musician, but slowly starts to perform his own material. It’s met with enthusiasm, and he slowly climbs to the top of his profession.

However, as he becomes more successful, his ego starts to eat him up, ebbing away at Lucien Ginsburg, as if his childhood self had become a distant echo.

Beyond the life story of Gainsbourg, the film plays out a larger message: what happens when one looses touch with oneself, and leads a life led by one’s ego? The result is a tumultuous journey into the abyss of human darkness, but also into what made Gainsbourg a hugely successful popular music icon. The film explores how being led by ego, which is mastered by constantly changing events and fashions in the world, creates tension, and leads one down many conflicting paths. Conversely, being led by an inside force, which is more peaceful in nature, brings unity. But before the onslaught of his own ego, Gainsbourg has many moments defined by his own inner stillness.

He is asked to perform one day to children whose parents haven’t returned from the war. It’s a sensitive scene, where Gainsbourg realises he can perform, despite his reservations. It is a turning point in his career, when he turns away from art, and towards his ultimate vocation. He also manages to shut out the voices in his head telling him that he would be a failure as a musician, and manages to listen to the quieter voice within.

At the height of his success, he ends up in hospital after continuous heavy drinking and drug abuse. He’s asked by the press surrounding his bedside what he plans to do, having been gravely ill and he audaciously announces that he intends to recuperate by indulging more in what made him ill. It is this devil-may-care attitude that ends up destroying his prospects for a peaceful or meaningful life.

He seems to be willing to do just about anything to propagate his success. He sings a reggae version of the French national anthem, La Marseillaise. He says that artistically, his version is closer to the original, but it angers some right wing veterans of the Algerian War. It could be argued that this was merely a publicity stunt initiated by Gainsbourg, who was becoming more attuned to the ingredients of success in the popular music world. He never shied away from criticism, releasing songs that often contained lyrics that were over-sexualised, cultivating the notoriety that Gainsbourg came to be defined by.

Birkin, his second wife advises him to be more casual in his dress and general appearance. This seems to lead to him acting differently, being shaped by an image imposed on him. However, it is with his second wife that he truly seems at peace, seeming to enjoy fatherhood and married life.

Unfortunately, his ego eventually catches up with him again, and he leaves his wife and children. He had become a dangerous force, firing a loaded gun in his children’s presence.

His third wife is his mirror image in terms of the paths she has taken, and where she has ended up in life. They have a child together, but we are led to believe that Gainsbourg enjoys temporary solitude. His ego appears to lead him to hold himself in contempt, something he also seems to hold for the rest of humanity.

Eric Elmosnino has a remarkably strong resemblance to his character, and gives a strong performance. Other strong performances come from Lucy Gordon (to whom the film is dedicated – she died last year aged 29) who plays Gainsbourg’s second wife, Birkin.

Vatican II and the ‘New Evangelisation’

Baptised to be prophetic