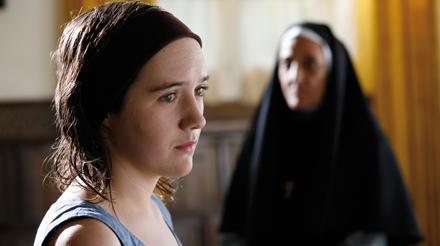 
Those who have been more adventurous in their tracking of films at the London Film Festival might have detected the number of foreign films that have dealt with religious themes and questions (cf. reviews of, Lourdes, Eyes Wide Open and As God Commands). These films have been quirky but serious interrogations of faith, grace and nature – that undetectable line that runs through human reality – and the human search for and openness to God’s presence or absence.  This latest film from Bruno Dumont covers all these fields. At its centre is the radiant and yet inscrutable character of Celine, played with considerable skill by Julie Sokolowski. Again, as with Lourdes and As God Commands, the setting is spare and austere. We first encounter Celine as a novice in a convent filled with a quiet but passionate intensity for God. Her real exemplar and mentor is the 13th century Beguine mystic from Antwerp, Hadewijch.  Hadewijch – about whom we know very little except for her writings – is a mystic of God’s love whose visions are often expressed in the most bodily images. Indeed, her visions represent a controlled almost performative art and she represents an important tradition in medieval female mysticism which does not shrink from understanding and experiencing the intensity of the Divine love in the most physical and nuptial way.

Dumont does not caricature life in the convent. Indeed, he presents it as a haven of common sense for the nuns recognise this intensity in Celine and wisely suggest that she needs to return to the world to mature. We follow Celine in her journey which is also a search for this God - or is it the experience of an all consuming love - that haunts her life. We also learn that like so many of the Beguines that Hadewijch both guided and wrote for, Celine comes from a very privileged if dysfunctional family – her father is a minister in the Government. Visually, the family apartment with its echoing, immaculately poised and polished spaces with its 18th and 19th century style, appears more empty than the convent. Indeed, the secular modern world in which Celine must now make her way is made to feel more like the desert than anything she encountered in religious life. This subtle inversion is part of the play that Dumont constructs throughout the film. It is part of Celine’s own character as we are constantly kept on the interpretive edge about her passionate search for love – Divine or human?  The moments when she seems to experience it or loss of it and appropriates the language of Hadewijch which both intensifies but may also create the experiences as much as it describes them, such is the danger of all language in the field as the mystics themselves knew.

When Celine meets Yassine (Yassine Salim) and his theologian brother Nassir (Karl Sarafidis), both devout Muslims, we feel that her search for love, in all its forms, might be resolved and yet we are faced with another reversal as Islam takes over from Christianity. Here the film moves in an oddly clichéd and incongruent way. Has Celine simply become a convert finding in the passionate Islam of Nassir a substitute for her own religious and human need? Is Nassir pushing her towards the ultimate performative act of fanatical love to become a martyr in carrying a bomb on the Metro?  These must remain questions because although we see Celine in the Metro and witness the explosion there is a sudden cut and transfer of place and time back to the convent. Again the confusion is deliberately part of the technique that Dumont employs to break with the normal narrative structure of time and place. With echoes of Bergman and Passolini, he forces his audience to experience the layered dislocation of such desire for an experience of God which is both in the world and beyond it. As an audience we are forced to live or perform the difficulty we have in reading and understanding these experiences and the people who have them. We set up our categories either of mystical theology or psychological pathology, but somehow they remain inadequate for the strangeness and the experiential reality they are meant to describe and explain. Naming fails to make the strange familiar and knowable. The danger is, of course, the important cognitive and experiential mechanism of dislocation we are left with bewilderment which stops us thinking and engaging. Instead of standing on the threshold of insight the film risks teetering on the brink of incoherence.

Yet, there is something teasing and playful in the final scene with its deliberate ambivalence  – is it a resolution or dissolution? Have we slipped from realism to fantasy?  We see Celine, post explosion, running from the convent and coming to a deep dark pond into which she throws herself. Is it abandonment at last to the all consuming love of God or is it suicide? Just as the question hangs, unanswerable, it is interrupted by the figure of a rehabilitated criminal. We saw him at the very beginning of the film working on repairs to the convent brick work. He rescues Celine from drowning. As she bursts into life and consciousness in his wiry arms has Dumont been playing with us?  Is Hadewijch too much for our postmodern sensibilities? Must the passionate search for God simply lead to a Mills and Boone ending? Or in losing her life, has Celine finally found it in this world through a sort of baptism of extremes? Has God finally answered her desire through the most unnoticed, unobserved ordinary character in the film? Is God like a French film director who occasionally lets us see his ironic smile?