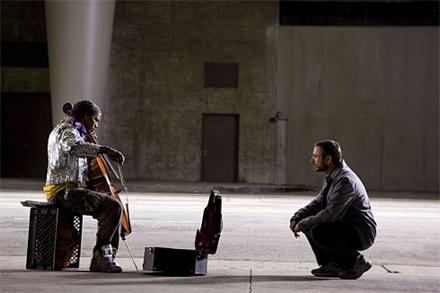 
The Soloist, directed by Joe Wright and starring Jamie Foxx and Robert Downey Jr, is based on the book of the same name by Steve Lopez. Both are based on the true story of Nathaniel Ayers, an exceptional cellist whose schizophrenia not only cuts short his career but leads to him becoming homeless.

Jamie Foxx, who won an Academy Award for his portrayal of Ray Charles, plays Ayers, and in doing so brings another – less famous but equally talented and troubled – musician to life. It was reported that Foxx feared for his own mental health as he immersed himself in this role, apparently seeking professional psychiatric help.The result is an undoubtedly excellent, sometimes heart-rending performance, an example of method acting at its most intense. Downey Jr, who has experienced well-publicised personal difficulties himself, plays Lopez, a Los Angeles Times columnist who discovers Ayers and writes about him in the newspaper.

Nathaniel is born with amazing musical ability, and triumphs over all the prejudice and social disadvantage that he faces, because of his race to live his dream: training at the prestigiousJuilliard School of Music and playing in an orchestra. However, despite all his talent, nurtured through a difficult childhood, his mental illness leads him to fall from the peak of his form into ruin, unable to deal with public performance because of the voices in his head. The situation that Nathaniel then finds himself in is one that is all too common: we know that the disadvantaged, the undiagnosed and the ignored exist in every community, but who actually takes the trouble to see the problem first hand and act upon it, when so many of us live such sheltered privileged lives?

Enter Mr Steve Lopez, who at first glance appears to be an obvious, middle class success story – except that Steve (in the movie at least) is separated from his wife, and is down on his luck. By chance, he stumbles across Nathaniel in his homeless state, and decides that to cure his writers’ block he will tell Nathaniel’s story in his column. Cue lots of middle class social action and incredibly awkward social interaction, as we follow a privileged journalist discovering the uncaring underbelly of his own city. The dark reality of exclusion and wasted talent is tempered only by the existence of a dedicated mission to the homeless and the kindness of strangers who, upon reading the column, seek to help Nathaniel.

Steve can’t help but sound patronising as he tries to direct and better the life of a down and out, but Nathaniel’s problems are fundamentally psychological and confound easy resolution. Instead we can observe how dysfunctional Steve’s life is, despite his obvious trappings of personal success and social respectability.  He struggles to make connections, keeping a safe distance from Nathaniel even while helping him, and perhaps acting out of guilt that the voyeurism of his column is keeping him in bread. The somewhat artificial relationship between the two men comes to a head with a falling out, and Nathaniel telling Steve that he is “of no consequence.”

The Soloist is a thoughtful and moving film with a definite religious undertone, albeit a somewhat contradictory one: references to ‘something higher’ looking down on us and to the concept of grace are juxtaposed with a crude anti-atheist joke and an eccentric Christian music teacher. This, however, is a movie of contrasts and dilemmas.

Perhaps the film has not done as well as it might have because the process of mutual revelation and restoration seems a little saccharine at times: this lack of rawness blunts what ought to be a gritty parable of modern life. However, the fact that it might only be a good film should not detract from what is a truly great story.

While in real life the loose ends may not be tied up so neatly, the challenge implicit in this film for us to help one another is clear. Nathaniel and Steve themselves articulate the trust that should always sustain our response to this challenge: