Skip to main content
Photo by leko-m at flickr.com 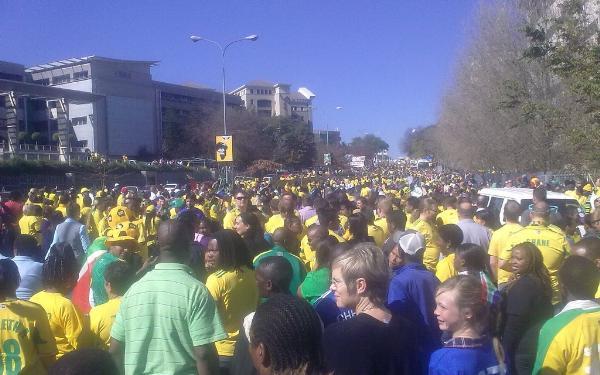 The celebrations in South Africa as the 2010 World Cup gets underway will be broadcast around the globe, but how much will we hear and read about the troubles that beset the country, some of which will be heightened by its hosting of the tournament? Graham Pugin SJ hopes that the Church can bear visible witness to the problems of trafficking, poverty and unemployment that the football may disguise.

Have I a dream? A vision? Or just indigestion?

Recently I was at a meeting here in Cape Town of the Council for Consecrated Persons (although with 99 sisters, the Vicar for Religious, one brother with his stalwart novices – from as far afield as Sierra Leone – and me, it might be more accurately called the Nuns’ Trade Union). It was a harrowing meeting at which we considered the issues of human trafficking with particular regard to South Africa and especially the World Cup.

After we had heard horrifying stories about women and boys in China and the Philippines being offered non-existent employment in South Africa, and about a mother who sold her daughter for a television set, her only regret being that she had not asked for a bigger set, Sister Facilitator looked us squarely in the collective eye and asked what each of our communities intended to do about it. By the time she reached the Jesuits, I was feeling the inadaquacy of mere men, and mumbled that we would continue praying. Two moments later, the Spirit struck with a vengeance and I tentatively raised my hand again.

I recalled the heady days of the Struggle, when the Church was able to make its protesting voice heard, and greying heads nodded appreciatively. Might it be possible to do something similar today? Perhaps when the television cameras of the world are focussed on South Africa, the Million-Man March might be impossible, but imagine just for a moment the effect of two hundred nuns in full habits, voices raised in the protest songs of the sixties, marching on the World Cup ceremonies. South African Police are no longer what they used to be, and it would need a stouter-hearted commander than they now seem able to field to order a baton-charge on that righteous assembly in the full glare of the world’s press.

What is the Church coming to, when a Council of Consecrated Persons can spend the entire morning talking without flinching about commercial sex-workers, but is rendered completely quiet by the mere mention of a protest march? I had clearly mentioned the unmentionable, and amid comments about the difficulty of obtaining official permission for marches and similar irrelevancies was allowed to return to my torpor.

Imagine my surprise some days later when I opened my e-mail, and discovered that some intrepid soul had taken up my idea and the Archdiocesan Justice and Peace Commission had secured last-minute permission for a march on Parliament the following day. There is life in the sisterhood yet.

But the issue is all too serious. One hears, and there is no way of verifying, that a five-star hotel hosting one of the teams has had all the expected upgrades required – plasma screens each the size of a football field and gadgetry we know not of – but is also required to provide prostitutes for the footballers: how could we possibly believe that?

One hears, all too easily verified, that street vendors will not be allowed within a million miles of any stadium. One hears that no-one, not even street artists, is allowed to mention ‘FIFA World Cup 2010’ without the requisite ‘TM’. One hears of students, part-time workers, issued with Visa cards with a 2000 rand limit for a food allowance at a time when that exceeds the monthly wage of many domestic workers who consider themselves lucky to be employed.

After considerable reflection, I recall that I have also heard that Tokkie, who is need of sheltered employment, has been temporarily employed by the municipality picking up litter, but one wonders why his job is temporary, and his is a rare story.

The newspapers have been full of stories of babies dying (at more than one hospital) because there is not enough money to sterilise their bottles nor to pay for the staff to do so. Billions of rands have been found to build football stadiums.

A luxury train system continues to be built while the regular trains collapse into chaos, and become ever more unusable for those who most need them. Formerly, the railways were a major employer of unskilled labour.

How do we in the Church analyse and respond to these crazy times? We could simply decide that it is all good clean fun and go along with it, or we could protest that it is all too pernicious. I am not a major proponent of Afro-pessimism, so I am surprised to find myself responding in this way to the World Cup ™.

I recollect a wonderful book from the mid-eighties, Money, Sex, and Power by Richard J. Foster, significantly no longer available according to Amazon. We are considering a situation where billions are being spent on entertainment while babies are dying because of dirty bottles, where people are being sold for sex because no other jobs are available, and where FIFA will be taking billions (in currencies more valuable than rands) out of the country which will have little to show for it but memories and super-highways linking useless football stadiums.

Foster was right about money, sex and power being at the root of most evil: I have a dream that the answer is a witness by the Trade Union to the values of Poverty, Chastity, and Obedience.

Graham Pugin SJ is Superior of the Jesuit community in Cape Town and Chaplain to the University of Cape Town.

‘The trumpet will sound, and the dead will be raised’

President Zuma: one year on