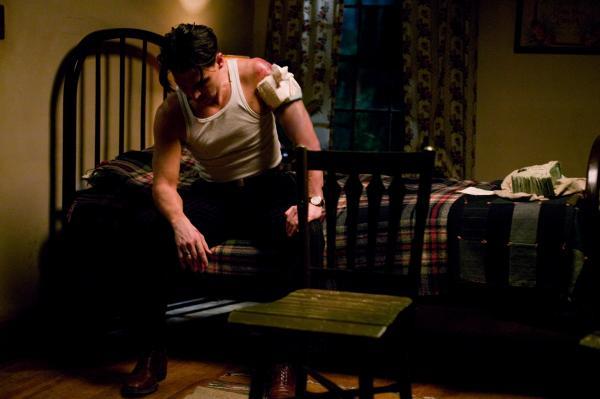 
Failing to capture any sort of atmosphere or tension, Public Enemies lacks the glamour of the great gangster movies or the harshness of modern re-imaginings. Both Depp and Bale are wasted – Bale’s FBI agent Melvin Purvis is given too little screen time to develop any sympathy or personality, while Depp’s John Dillinger is reduced to a series of set-pieces that exploit his ability to change his appearance and nothing else. The film is caught uneasily between hagiography and serious study of crime, leaving half a dozen fascinating sub-plots swinging.

Dillinger himself comes across as inconsistent: his romanticism betrays a thuggishness, and he is brutal where he is supposed to be tender. Beneath Depp’s smooth performance, the sense of a violent, brooding gangster is left unexpressed, and scenes with his beloved offer some unappetising machismo as if it were charm. Bale’s Purvis is worse: with the far more interesting – and dark – character of J Edgar Hoover hovering above him, he comes across as a puppet, with the coolest lines going to his two Texan subordinates. In the attempt to develop an ensemble cast, director Michael Mann spreads his script too thinly.

Such dull cinema is, unsurprisingly, not founded on any deep moral intention. Dillinger is supposed to be an anti-hero, but this translates into disconnected bouts of viciousness and sentimentality. His spectacular escapes are unflinchingly portrayed, but the gunfire and bloodshed are softened by the unfortunate choices of music. There is no sense of why Dillinger robs banks and his own moral ambivalence is only made explicit when he is set along a bona-fide maniac, Baby Face Nelson.

Equally, Purvis is given no purpose. He is first seen hunting down Pretty Boy Floyd, killing him with a precise shot: it is a given that he is the gangster’s nemesis, but he lacks motivation or depth. There is a suggestion that these two men and their destinies are inevitable and fatalistic, yet the actual film fails to give them the sort of mythic qualities required for this.

It is never clear whether Dillinger’s throwaway lines about living for the moment are meant to provide some kind of value system to his behaviour – his loyalty to his subordinates and plans for the future suggest that he has beliefs beyond this trite sloganeering. But much like the jerky cinematography of the various fight sequences, or the hints towards the development of the FBI’s modern technology and techniques in crime fighting, this is never developed, never questioned.

This vague presentation of the criminal is mirrored by the ambiguity of the law-enforcers. Purvis is honourable and sensible; Hoover is brooding and sinister, yet the use of extra-legal methods of interrogation and the frustration of the government at Hoover’s behaviour are not integrated in the plot, and the film cannot decide whether the police are in the wrong or right when they bend the law and – in the case of Hoover – threaten the constitution. There are nods toward the media manipulation of crime, but the characterisation is too bland to sustain any critique.

Ultimately, Mann’s movie is slick and soulless, barely exploring the fascinating historical era, never finding a spark in Dillinger’s romance with a coat-check girl and merely mentioning the political and criminal forces that were gathering in America around this rather old-fashioned bank-robber.