Skip to main content
Photo by Nheyob via Wikimedia Commons 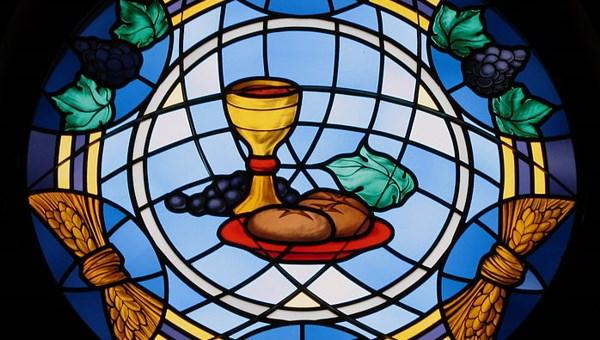 As we come to the end of the Season of Creation, Fr Harry Elias reflects on how the new creation is anticipated in our respect for the earth and all of its creatures. The Eucharist, he says, ‘is a sign that the offering of the work of our hands with the fruits of the earth, even when it seems to end in failure, is also blessed, filling it with the transfiguring presence of Christ.’

In the words of institution of the Lord’s Supper, Matthew and Mark have Jesus say over the cup of wine, ‘This is my blood of the covenant’, and connect this to the forgiveness of sins, while Luke and Paul have the words, ‘This cup is the new covenant in my blood’, adding ‘do this in remembrance of me’. God’s covenant in scripture refers to the bonding of God with another party, although sometimes this bond is referred to without using the word ‘covenant’; an alternative, ‘I am your God, you are my people’, is also employed.

Many covenants were known to the Jews in the time of Jesus – with Noah, Abraham, Moses and David – so the words with which Jesus instituted the Eucharist, remind us of contexts other than the Passover with its sacrifice of the Paschal lamb. A notable reference to blood of the covenant is in the sacrifice that sealed the giving of the Law to Moses (Exodus 24:5-8). However, it was the annual Day of Atonement sacrifice (Leviticus 16) that was the one in which blood was shed for the forgiveness of sins – for the high priest and for the sins committed unintentionally[i] by the people according to the Letter to the Hebrews (9:7). The reference to the forgiveness of sins also appears in the promise of the new covenant in the prophecy of Jeremiah. After pronouncing that the Lord will make a new covenant, Jeremiah goes on to say: ‘I will put my law within them, and I will write it on their hearts; and I will be their God, and they shall be me my people........for I will forgive their iniquities, and remember their sins no more.’ (Jeremiah 31:31-34)

However, as well as a link with forgiveness of sin, we can see a connection between the new covenant and the new creation. In the Letter to the Hebrews (13:20), the blood of Jesus, the great shepherd, is the blood of the eternal covenant. The author of the letter takes for granted that the new covenant is the everlasting covenant. The first mention of a covenant in the Bible is in Genesis 9:16. Spoken to Noah after the flood, it is a covenant with all humankind, animals and indeed the earth. The everlasting covenant is also called the covenant of peace[ii] in Isaiah 54:10 and Ezekiel 37:26. Both Isaiah 54 and Hosea 2 show the Lord as husband to his people whose steadfast love would not allow the waters to go over the earth again. He would bring about lasting peace and harmony with the earth and its creatures and would be ever ready to fulfil their needs. The pollution of the earth seen as judgment in Isaiah 24:5 is reversed in Isaiah 25:6-8, which pictures a Mount Zion where there is spread out a banquet of rich food and well-matured wines, where death is swallowed up forever.

In Paul, the new creation is not simply a hope but is realised in those called by God to be his people: ‘So if anyone is in Christ, there is a new creation, everything old has passed away; see, they have become new’(2 Corinthians 5:17). Yet, although we are made new and ‘are already raised up with Christ and seated in heavenly places’ (Ephesians 2:6), our life is hidden with Christ in God and will be revealed in its glory when Christ is fully revealed (Colossians 3:1-4). Paul never lets us forget that newness of creation rests on Christ’s faithfulness in the offering of his body and blood (Galatians 6:14-15).

In Romans 8:18-30, Paul writes about this hope of a future restoration which highlights the inextricable link between the created world and the children of God, and very likely draws on the prophets (e.g. Joel 1:8-10) and their call to lament the state of the earth which mourns on account of the devastation due to man’s disobedience. Yet, creation’s enslavement to decay contains the hope that it will be freed and enter into the glorious freedom of the children of God. In the meantime, not only non-human creation but we ourselves, who have the first fruit of the Spirit, groan inwardly in the hope of adoption as God’s children and the redemption of our body. We may not yet see what we hope for but the whole of creation awaits its freedom from its labour pains ‘with eager longing’, the very Spirit itself groaning wordlessly and interceding on our behalf. Paul sees the resurrection of the body as fundamental for the redemption of creation.

Paul makes no explicit connection between baptism and Eucharist. Baptism in Christ is baptism into Christ’s death, which was a death to sin, but a becoming alive to God in newness of life (Romans 6:3-4). In 1 Corinthians 10:14-22, by contrasting the eating of food sacrifices offered to idols with partaking of the table of the Lord, Paul accepts the table of the Lord as one of sacrifice. So while baptism initiates that sharing in Christ’s death, inserting us into the one body of Christ, we, his Church, as that one body, continue our participation in his sacrifice (‘because there is one bread, we who are many are one body’ - 1 Cor 10:17). Paul concludes his recounting of the Lord’s Supper by saying, ‘For as often as you eat this bread and drink this cup you are proclaiming the Lord’s death until he comes’ (1 Cor 11:26). Proclaiming, of course, for him would include the offerings we make to witness to the newness of life by the conduct of our life, not just in words. ‘Real circumcision is a matter of the heart’ (Romans 2:29) and later in the same letter (12:1), he appeals to the Romans to present their bodies as a living sacrifice to God as their spiritual worship.

John brings out the special character of the Eucharist by emphasising its link with the manna in the desert, a link that is implicit in the incidents of the multiplication of loaves and fish in all four gospels. The manna from heaven that Christ brings is his presence as the one offering himself to bring us eternal life (John 6:53-54). It can be seen as new creation food for new creation beings, given to the Church so that each receives the spiritual nourishment needed to transform the whole of creation into newness.

I conclude by commenting on Pope Francis’ Laudato si’, §236 in particular. After mentioning that, by being joined to the incarnate Son, present in the Eucharist, the whole cosmos gives thanks to the Lord, Pope Francis goes on to quote Pope John Paul II in saying that the altar on which the Eucharist is celebrated is in some way the altar of the world. As a holy nation, a royal priesthood (1 Peter 2:9),we exercise with Christ, our High Priest, the priesthood of the new covenant, the offering of creation’s praise and thanksgiving for its renewal, the priesthood of the everlasting covenant.

The paragraph continues with a quotation from Pope Benedict XVI: in the bread of the Eucharist, ‘creation is projected towards divinization, towards the holy wedding feast, towards unification with the Creator himself.’ This is not simply a hope for the future. It is being realised. The bread and wine of the Eucharist is taken up by Christ into his own offering, and, blessed by the Holy Spirit, becomes a fragment of matter already made new.  That in turn is a sign that the offering of the work of our hands with the fruits of the earth, even when it seems to end in failure, is also blessed, filling it with the transfiguring presence of Christ. That new creation is anticipated, for example, in the healing of relationships by repentance and forgiveness, in the struggle for justice and equality, in the healings of body, mind and spirit, in increasing respect for the earth and its creatures, in their preservation and flourishing. Partaking in the Eucharist as members of Christ’s body keeps alive the hope of a new creation and motivates us to continue with our own particular offerings for divinising ourselves and creation. We share in Christ’s lament over death but also in his faithfulness and in the joy and power of his risen self. Full divinisation will occur when, by some apocalyptic event, the presence of Christ reaches its full stature and is revealed in all its glory. All creation will then have become the real presence not only of the risen body of Christ but of our own risen bodies as well, without loss of any individuality or relationship we value.

[i] The utterance of Jesus on the cross ‘Father, forgive them for they know not what they do’ (Luke 23:34), (omitted in some ancient manuscripts), may be a reference to this aspect of his atonement sacrifice offered now once for all.

[ii] Robert Murray SJ calls it the Cosmic Covenant in a monograph with that title and published by Sheed and Ward, (London, 1992).

The Gift of a Stranger: Forcibly Displaced People and Hope-Gifting