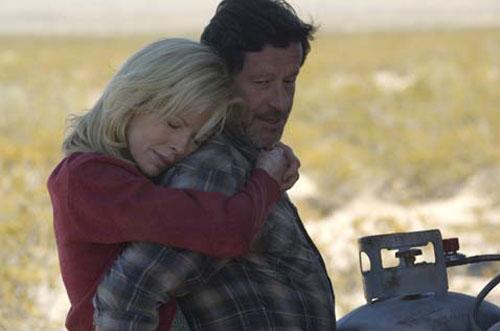 The Burning Plain takes its narrative cues from nineteenth century novels that were preoccupied with the passing of characteristics between the generations. Despite some slick editing, this is a very simple story, identifying cause and effect clearly and seeing the intimate connection between the behaviour of succeeding generations. By deceptively cutting the three generations’ plots in parallel, Guillermo Arriaga turns a straightforward study into an engaging formal experiment. Behind the clever confusions of time and space, however, and the stunning cinematography, Arriaga is merely making a dull and obvious point about guilt and pleasure, and the way that parental behaviour determines children’s personalities.

Arriaga is known for his clever script, 21 Grams, and his pretentious globalism in Babel, where Brad Pitt and Cate Blanchett descend into relentless over-acting in a desperate bid to hide the weak script, and the director flung naked Japanese girls all over the screen to distract from the underlying and hackneyed ‘we are all connected’ philosophy. The Burning Plain has that same, sappy interconnectivity, and it is played out in obvious terms. Charlize Theron may get naked, people might have (frankly joyless) sex, there might be some self-harm, but the actual concept behind the film is child-like, not adult.

For the first hour, the muddling of the narratives and the strong performances lend an eerie menace to the film. There are grim mornings, loveless relationships, missed communication and the quiet despair of the professional woman: it seems to be a series of poignant vignettes, each one more subtly miserable. Gradually, characters and places move between each sequence, weaving the plots together and slowly revealing the inevitable unity. And, from the very first shot, fire is a central theme – destructive and beautiful, a nice, simple symbol for the burning anguishes hidden beneath the characters’ almost robotic and compulsive activities.

The low-key and subdued atmosphere does allow the performers to shine. Kim Basinger, torn between her lover and husband, demonstrates a surprising range and depth of ability. At times guilt-ridden, she sweats and worries, taking on the aspect of an embalmed corpse, wandering through life without purpose, without passion. Yet with her lover, she reveals a tender, joyful enthusiasm, playing house in a broken trailer with the gusto that her married life lacks. There is no real explanation for her almost bipolar conduct – luckily, the sharp editing removes the need for coherence here – but her performance is gripping. Imbuing her performance with nuanced detail, she lends a genuine tragic grandeur to her character.

It is a shame that Arriaga felt the need to make his usual point about interdependence: the film is far more interesting and intense when it is content to observe unhappiness, rather than make a point about its causes. Much has been made of Arriaga’s transition from writer to director, but it isn’t the film-making that is the problem here. The script is solid, and the film as a whole is visually sombre but enticing, well-paced and full of strong acting; however, ultimately the puzzle it creates has an obvious solution, and behind the challenging aesthetics lies a bland message.

More about this movie

Advent is the Time for Prophecy