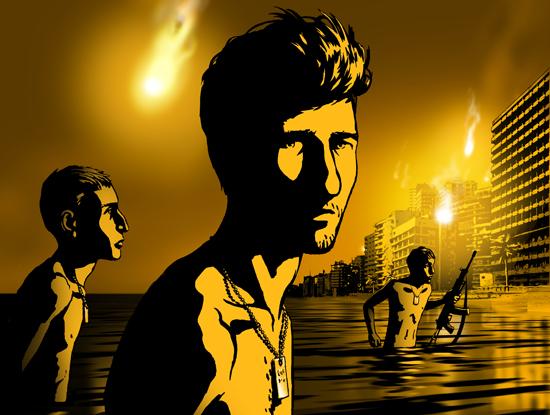 
Politically engaged, a personal memoir, an examination of the psychology of trauma and an hallucinatory meditation on modern warfare, Waltz With Bashir matches the surrealism of Apocalypse Now! with the gentle beauty of Linklater’s Waking Life. The irregular animation and conversational pace are energised by flashback battle-scenes that guide director and star Ari Folman through his war experiences towards a final, distressing revelation.

Provoked by a friend’s recurring dream, Folman realises that he has no memories of his participation in Israel’s 1982 invasion of Lebanon. He tracks down his fellow soldiers, discusses his returning memories and recollections with his therapist, trying to discover the reason for his amnesia. A single, dramatic and symbolic dream acts as a beacon, leading him back to a terrible massacre.

If the plot is simple – and ultimately obvious, in that a terrible trauma caused suppression of memories – Folman’s approach is stunning. Not only is there a profound visual elegance in the animation, but the jolting between battle scenes and conversation avoids the usual adrenalin rush of war movies, striking a balance between the drama and thoughtful reflection. Waltz With Bashir ignores simple caricatures of good and evil, doesn’t explore the reasons behind the invasion and suspends events in a fragmented, soporific daze. The narrative arc has the subtle unveiling identified with a therapeutic process.

Apart from the implied criticism of most war films – they exclude so much, sacrificing the personal experience for high tension and pornographic gore – Waltz With Bashir is thematically rich and intelligent. It never strives to give answers, only complicates simplistic responses. Folman contrasts his war with his father’s experience in World War II, noting the shift from Jewish victims of atrocity to Jewish observers; he admits that his service was motivated less by patriotism and honour than a wish to upset his ex-girlfriend. Interviewing his old army buddies, they are struck by their inability to understand what had happened, realising that they had lived through powerful times without acknowledging their own participation. The single heroic escape from death is handled in a mundane, almost absurd manner: the survivor’s guilt is quietly affecting.

Gradually, Folman wades through the recollections, approaching the massacre. As he gets closer to the trauma, the world becomes more disordered. Soldiers are decadent and ill-disciplined, civilian spaces have been commandeered or destroyed. A fire-fight has become a mere spectacle for the citizens and the command structure is dissipated and slow. By the time that rumours of a massacre by the Phalange have circulated, responsibility and compassion have evaporated. The invading force has collapsed, either ignoring the atrocity or hoping that another officer was dealing with it.

Being about the Middle East, the film has a timeliness that is not exploited. The brutal conduct of the Christian Phalanges is not presented as a facile explanation for subsequent Muslim outrages, but as an almost inevitable result of warfare. It is certainly a challenge to any Christians who might claim moral superiority over other religions, as an explicitly Christian group perform explicitly Christian atrocities. But Folman cares less about the geo-political specifics than an abstract timelessness, letting the events resonate on personal and humane levels.

It isn’t in the final moments, when old news-reel replaces the animation and the horror is revealed, that Waltz has its most potent impact. In the scenes leading to the denouement, which detail the breakdown of command and the wilful ignorance of the troops, Folman exposes the failure of imagination and compassion. Rather than reduce the slaughter to a matter of bad guys shooting innocents, he identifies his own complicity, the general confusion and amorality. As befits a meditative film, it offers no conclusions, only contemplations. Waltz With Bashir is a step forward for cinematic animation, for intelligent film-making and a surprising blend of personal and political immediacy.

It is in our hands

Faith in the Workplace