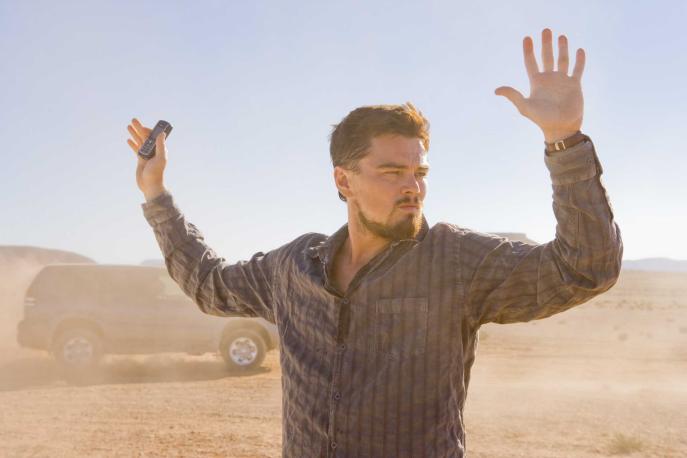 
Body of Lies begins with a foiled attempt by the authorities to capture a terrorist cell in Manchester; the occupants detonate themselves (and a large section of their flat and those of their neighbours) after proclaiming their act is “In the name of God”. This forms the context of the movie: increasing numbers of bombings of innocent civilians and the ‘martyrdom’ of Jihadists, all “in the name of God”.

After this introduction, the action moves to the Middle East where we encounter up-and-coming CIA agent Roger Ferris (Leonardo DiCaprio), who is tasked with taking out the leader of the Jihadists with the help of the Jordanian General Intelligence Department (GID).  Ferris’ boss, Hoffman (Russell Crowe), remote-manages his counter-terrorism operation (not always successfully) via telephone calls from the United States. While DiCaprio’s performance is strong, Crowe’s presence is often blundering and is deliberately absurd – he directs the war in the midst of his domestic duties such as dropping his children off at school or helping them at home.

Ferris is fluent in Arabic and understands and observes the culture in which he operates. His boss, on the other hand, perhaps parodying America’s attitude, cares little for inculturation.  His rudeness and lack of consideration are painfully obvious to the viewer and result in the death of people who are seen only as pawns in a much larger struggle and whom he seems coolly detached from as he goes about his paternal responsibilities. The debonair Jordanian spy boss Hani (excellently played by Mark Strong) seems to be the classic master spy and in his own words is an “exceedingly polite gentleman and a wonderful conversationalist” – but he employs brutal methods of torture interrogation in his nicknamed ‘fingernail factory’.

Ferris is simultaneously the architect of, and caught up in, the ‘body of lies’ which is woven around him. He promises never to lie to Hani, whilst knowing that he cannot keep that promise; yet he still offers asylum and protection to, and goes out of his way to help, his Middle Eastern friends and contacts. The crux of his plan to catch the Jihadists involves faking the existence a rival Jihadi group and attributing to them the credit for an attack on a US military installation.

In the midst of all of this, Ferris falls in love with Aisha (Goldshifteh Farahni), a local nurse who tends to Ferris’ (many and realistic) wounds. She becomes the reason for him wanting to remain in the Middle East. He uses his knowledge of local cultures and customs as he meets Aisha’s sister and nephews in order to obtain permission to date her, and although they are not fully developed, it is his feelings for her that lead him to be willing to sacrifice himself.

Ferris is faced with ‘martyrdom’ at the end of the film when he is captured and restrained in front of a Jihadi flag. When he is finally confronted for the first time by the elusive Jihadi ringleader Al-Saleem, they trade quotes from the Koran that are often used to justify terrorist acts in the name of God, whilst Al-Saleem brutally tortures Ferris. It seems obvious to everybody except the Jihadists that none of this behaviour, on either side, is in the name of God.

The film makes an interesting point about the use of technology in the wars post 9/11. The CIA have access to the most sophisticated technology (all-seeing spy satellites and sophisticated secure mobile technology) but no matter how great and powerful the technology, their efforts still require good men in the field and even then the most effective results seem to be achieved by those (aka Jordanian GID) who don’t have all the technology but put a premium on human relationships, old-fashioned spycraft and individual manipulation.

The film offers an insight into the lives of the people in the Middle East who have to face terrorism every day.  Unfortunately, the world seems tired of such graphic depictions of war, be it in the Middle East or elsewhere, and as the news cycle quickly tires of war and favours the trials and tribulations of celebrities – think Russell Brand/Jonathan Ross and John Sargeant – I think people might tire during this movie.