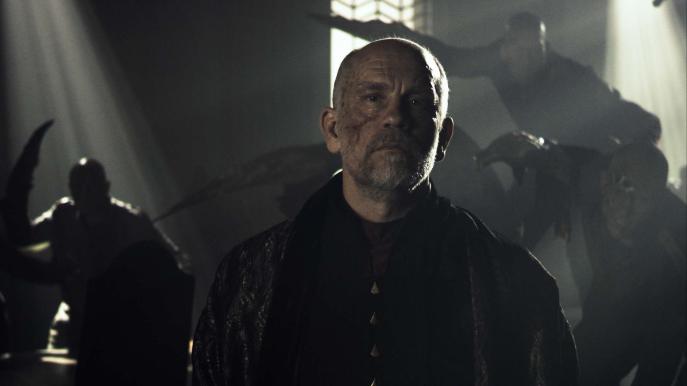 
Pulling together a ragged bunch of wretched performances, a script that lumbers and an ugly digital cinematography apparently edited by a drunk, The Mutant Chronicles is a rare film that can only be enjoyed through the reviews. On the Rotten Tomato website, international critics line up to roll out the one-liners and insults. I was simply astonished that anybody involved in this production either thought that it had any aesthetic worth - or held the public in such disrespect that they could imagine an audience for nearly two hours of bad plotting, racial stereotyping and clumsy discussions of faith and apostasy that would shame an illiterate medieval peasant.

The story concerns a big machine that comes out of space and turns humans into mutants, with lobster claws for arms. Avoiding any attempt to explain the process or reason behind this extra-terrestrial plot to destroy, these visually unimpressive monsters race about hacking people up, getting blown up and splattering the camera with blood that glistens like rubies. Machine gun fire can’t stop them - it just makes them messier - but swords can. Obviously.

A secret order of monks, led by Ron Pearlman, know how to beat the machine. Pearlman, in a performance that suggests that the red face paint was doing all the acting in Hellboy, pulls together a team of warriors. These warriors don’t have characters: why bother writing someone of depth when they are fodder for gory death? Instead, they embody those qualities most associated with their nationality. The oriental is inscrutable. The German has a moustache and gets uptight. The American is a free-thinking hero. And - in a narrative cliché that was last seen in the early 1980s - the black guy dies first.

Given the amount of slow motion, repeated film stock and Pearlman’s ponderous narrative, it is quite possible that this film takes longer to watch than it took to make. The initial battle sequence is replayed with a commentary. The technology, oddly based on fossil fuels and recalling the machinery of the First World War, is fetishized. For some reason, future warfare involves trenches, and the home front is a school play vision of the home front, 1939- 1945. Almost every scene poses a series of ‘how’ and ‘why’ questions that are never answered. Why did that plane explode? Why does John Malkovich’s character care so little for his own life? How did the mutant manage to fly that machine with one arm and a claw?

The answer to every question is, inevitably, the same. Who cares? Certainly not the cast or crew. Since this film has that horrible and jumpy digital quality, the action sequences are reduced to jerky confusion. The sepia tinted colour - splashed with red whenever a body bursts open - adds to the murky horror. Marcel Duchamp would be delighted by the retinal shudder induced.

Ultimately, The Mutant Chronicles stands as a powerful argument against cinema. It is lazy, thick-headed and mistakes a few lines of dialogue for serious discussion. It is ugly to watch, irritating to hear and panders to the lowest mentality. The bad guys have no shade, no purpose. The morality is black and white, stupid and trite. Since script-writer Philip Eisner also wrote Event Horizon, we can assume that he has an interest in the metaphysical - perhaps he could go away and read a book about philosophy before offering us any more of his thoughts. And director Simon Hunter could usefully go back to Lothian Health Board, the movie moguls that first commissioned his work.