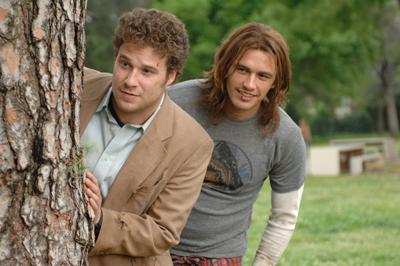 
Recently novelist William Leith wrote a short piece explaining what drugs will do to a film. Movies on heroin become tragedies in which a romantic hero fails to achieve the euphoria in life that he feels when high and ends up a soulless wretch unable to see beauty in life outside his fix – see Trainspotting and Requiem for a Dream. More obviously, cocaine movies are about power and ambition. Think Scarface and Goodfellas, specifically the last part. And finally, films involving marijuana set the scene for comedies in which two young dudes have an adventure, get a little out of their depth, but end up better friends for their experience. Dude, Where's My Car? is a solid example, so are the Harold and Kumar films. Pineapple Express is textbook yet with all the predictability and cliché that might come with being an unwavering genre flick, this is still a very enjoyable and inventive film.

Seth Rogen plays Dale, a process server who spends his days dressing up in disguises and serving people with subpoenas. There's little else in Dale's life apart from his high school girlfriend. James Franco is Saul, his dealer, but they aren't friends... yet. When Dale's job takes him to the home of local drug kingpin Ted, he witnesses Ted and a bent cop murdering someone. He discards his spliff and drives away but is seen by Ted. Dale goes to Saul's place and soon concludes that Ted, the local source of the 'Pineapple Express' strain of marijuana that was in his spliff, will be able to trace it back to Saul and then Dale and so the pair go on the run – and that's the beauty of paranoia in stoner films: it ain't paranoia if they're really out to get you.

At the heart of any stoner film is friendship and as Pineapple Express continues there's some explicit male bonding. Many of the jokes come as the characters earnestly express their feelings to each other, and the script even brings the two murderous hit men into this emotional openness as their lethal pursuit is peppered with yet more comedic affection. But though these things verge on the effeminate, the healthy dose of machismo found in the hilarious car chase and over-the-top shoot outs balance things out.

If Pineapple Express does veer from the generic conventions of the stoner movie, it's in bringing a third man to the love-in. Here, Danny McBride plays Red, Saul's dealer, whose self-serving betrayals of Saul and Dale are hilariously punished as the film goes on. McBride's redneck delivery and irrelevant asides turn this Judas character into a likeable scene-stealer - "I used to use this gun when I was a prostitute" says Red while holding a dinky little pistol. As ever Seth Rogen is a teddy-bear of a human being and is effortlessly endearing. Unlike his co-stars, James Franco is not recognised for comedy; he's best known as Green Goblin II in the Spiderman films. But here he exhibits exceptional comic timing and builds a strong rapport with Seth Rogan, without which the film could only be a failure.

Pineapple Express isn't a sophisticated movie and won't be to some people's liking. It's crude, immature, and downright stupid in parts, but it is always pretty funny. This film feels like it was made by friends who were solely motivated by having a good time and trying to make each other laugh. This conviviality is priceless in bringing its audience into the joke, and considering that this is a $20 million budget film fresh from Hollywood's reigning king of comedy, Judd Apatow, it's all the more impressive that its corporate background hasn't corrupted the bonhomie of this big kids' adventure.