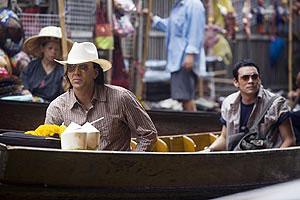 
As silly as it may seem, I always feel a slight frisson of excitement when going to see an 18-certificate film at the cinema. What grotesque or sordid activity could have been committed to celluloid that would result in such a rating? Well, after watching Nicolas Cage’s latest offering, I’m still wondering.

Cage plays Joe, one of cinema’s most classic of roles: the lone hit man out on one last job. He of course commits all his acts with stealth, precision and routine, never getting caught and never feeling a hint of remorse. To help him along the way he requires an assistant who, once the task is completed, he will also do away with.

When he is called to Bangkok to commit four murders over the course of a month for some Thai gangster, Joe recruits Kong, a petty thief, to help him. This help includes picking up briefcases containing information on each of his victims. What starts out as your typically frosty relationship soon transforms into a friendship as Joe decides to train Kong up to become an assassin after recognising “a younger version of himself.”

Add to this the fact that Joe falls in love with a pretty Thai pharmacist who is both deaf and dumb and before you know it, Joe’s technique of doing the job and getting out is soon compromised, as so often happens with ‘one last job’ in films.

Bangkok Dangerous, directed by the Pang Brothers, is a remake of a Thai film also made by the brothers and while I haven’t seen the original, I would imagine there is little point to the remake as very little actually happens during the one and a half hour running time.

Joe, while not completely unlikeable, is not exactly the most interesting of characters, with Cage playing him with all the charisma of an overcooked Thai noodle. And if the romance was supposed to portray a softer side of the hardened hit man then it falls flat as the couple only have a few scenes together, which are all silent seeing as his love interest is unable to speak. In fact, the audience will have more interest (although still not that much) in the budding romance between Kong and a nightclub dancer.

For a film marketed as an action film, there is actually very little action. Aside from assassination number three, which involves a chase through a water market, the only real excitement comes right at the end and even that is only your standard shoot ’em up that features at the end of many a film, where everyone seems to die aside from the protagonist.

The rest of the film seems to be made up of half-baked scenes that don’t really add up to much. There is a montage of Kong learning to fight and shoot but the furthest Kong ever actually gets to becoming an assassin is steering the boat while Joe aimlessly shoots at a gangster.

So other than a severed limb, there is nothing unsightly or 18-certificate-worthy to be seen on screen. In fact, I have seen 12A rated films that have shocked and scandalised more.

The spirituality of rest