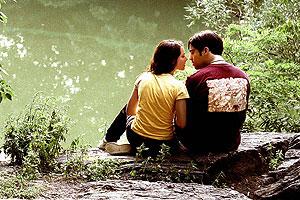 
Despite its yoof title, its period setting, its street slang and drugs, despite its New York hip-hop soundtrack and graffiti fonts, this is a very straight-laced, accessible tale. And a familiar one too - it shares several elements with American Beauty.

Welcome to New York City, summer 1994. Eighteen year old Luke Shapiro is a lonely pot dealer. One of Luke's customers is Dr. Squires, a psychiatrist who pays for his dope with "treatment". Dr. Squires is a mischievous spirit but stuck in a loveless marriage. Soon, this unlikely duo bond and attempt to indulge in the recklessness of youth that Squires longs to recapture and Luke seems incapable of enjoying. And so, you see, this is a carpe diem, make hay while the sun shines, live for the moment, look on the bright side, coming of age, kind of a movie. The problem is, it's not convincing enough. Whatever beauty there is in life, it isn't much shown here. And after two non-stop hours of everyday anxiety and chronic despair, The Wackness is more likely to leave you feeling bleak and exhausted instead of having you revel in that great existential consolation that life is what we make it.

But what is special about this film, is that Ben Kingsley expertly transforms himself yet again. There is not a trace of the dignity and determination of Gandhi and, thankfully, there's no sign of that menacing, double-hard nutcase from Sexy Beast. Here Kingsley is benign and shaggy-faced, skilfully veering from pathetic immaturity to endearingly energetic old rogue to give a wholly enjoyable performance. If this film can be saved at all, it'll be by Ben Kingsley’s efforts. His young co-star Josh Peck, best known for a Nickelodeon kids' show called Drake and Josh, holds his own but playing a down-in-the-dumps teenager is clearly not much fun for anyone. Olivia Thirlby plays Stephanie, Dr. Squires step daughter and Luke’s love interest. Stephanie is self-assured and fun-loving in a way that Luke and Squires can only aspire to be and yet her character plays this antithesis without ever becoming an antagonist, which is purely down to Thirlby’s skilful performance.

Why is The Wackness a period piece? Its 1994 setting adds little to the story. In fact, its horrendously gratuitous shot of the World Trade Centre is laughably pretentious. Meanwhile, the inclusion of cassette mix tapes, old video games, pump-up trainers and Forrest Gump movie posters are neither old enough for nostalgia nor different enough to invite meaningful parallels between then and now. Much is made by the characters of the new mayor's aggressive regeneration. Rudy Giuliani’s now infamous "Broken Windows" approach - which enacted zero-tolerance policing for petty crimes like vandalism, fare dodging and graffiti in the hope that it would stop crime escalating - worked to drastically lower crime-rates. By invoking Giuliani’s crusade the film could simply be setting the scene. It could also be lamenting that the sterilisation of the city is ruining the potential for high jinks. But while the characters gripe about this ruthless and soulless crackdown, Luke spends every day of the whole summer walking around the streets dealing marijuana in daylight, in the open, with no interference from the authorities. All in all, the period setting isn't thought out.

In the end, Stephanie sums it up "I'm all about the dopeness and you're all about the wackness". Translated, this means: "I maintain an optimistic world view while you, sir, needlessly fixate on the negative aspects of your experiences." Luke and Dr. Squires end up happy for having had the adventure if not for the position they’re left in -but that's the point, that they’ve learned to count their blessings. And as Mott the Hoople's anthemic "All The Young Dudes" soundtracks an affectionate slow-motion shot of Luke, The Wackness finally sheds its streetwise affectations and gives into the sentimentality that it was always about.

The Letter to the Colossians