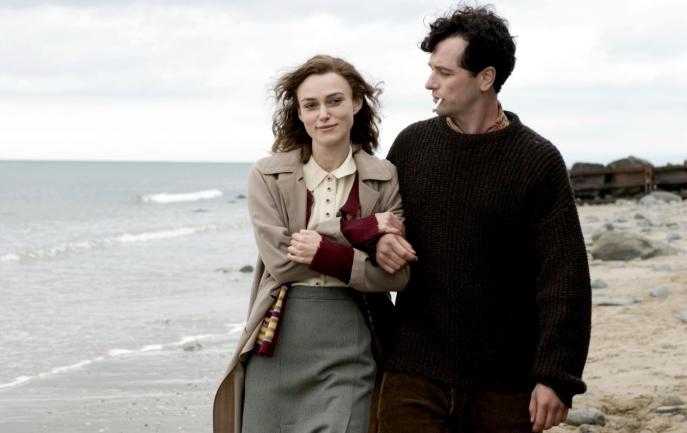 
The historical incident that fuelled the creation of The Edge of Love involved a soldier, returned from a war, picking up his gun and turning it on the house of the man he suspected had stolen the heart and body of his wife. From this furious act comes a film that attempts to portray the inner interactions of Dylan Thomas, his wife, and the woman who was briefly his childhood lover, as they live out the war in London and New Quay, Wales.

It’s an odd film, with its famous poet’s creations pushed to one side. Despite extracts of Thomas’s poetry kidnapped from their homes and drifted as a soundtrack across the film – ‘Love In The Asylum’ and ‘Lament’ in particular are used to describe Thomas’s relationship to the two women – we are left without a genuine sense of Dylan Thomas as someone who wrote extraordinary poems. The result is the all-too-typical consequence of film-love, where the audience are asked to assume that two stunning women are simply in love with the main protagonist, even if, as is the case here, he is essentially a cowardly drunk.

Thomas is portrayed by Matthew Rhys as an alcoholic Peter Pan, careless in his chase of sensual pleasures and vicious in his rejection of them when they stale and grow old. He and his wife Caitlin become Doggy and Cat, with Dylan reprimanding himself for urinating on a potplant as ‘naughty doggy Dylan’ before rolling over and falling back asleep in the warm morning bed. The distinction between him and Vera’s soldier husband (Cillian Murphy) helps explain to some extent the actions of Vera, dancing and kissing Dylan on her wedding day: whereas her husband’s will runs through his straight-backed sense of duty, Dylan is a playful, charming child begging for more pleasure.

The lack of focus on Dylan’s poetry at least spared the audience from the worst of the “artistic genius” guff that most films force on us. I was delighted to hear groans and derisive laughter from the audience at the line ‘poets feed off life’ (an isolated slip), the kind of platitudinous nonsense that the real Dylan Thomas’s poetry is often bastardized as; perhaps there is a tide change towards an impatience with standard “tortured Bohemian artists” characterisations. Still, it would be sad to see this portrayal of Thomas sinking too deeply into the national consciousness without encouraging people to dive into the weird, sensual world of his poetry.

The direction captures some of this world, with plenty of reflections, blurred mediums (as if it’s being shot through one of those ubiquitous pint glasses) and heavy, consistent colouring in blitzed London. Of the two women, Keira Knightley’s Vera emerges with less accented embarrassment than Sienna Miller’s attempts at an Irish accent, although the former would be far too exquisite to be caught hanging around a slob like the Thomas we see in the film.

It’s hard not to think of duty and freedom as two opposed sides to love when watching this film, an opposition that isn’t an entirely healthy one. Vera doesn’t seem to love her husband at any point, and waits for him out of duty to their child and a feeling of loneliness; countering this is her financial support for the Thomas’s debaucheries and her infidelity with Thomas, which in the film’s logic is part of a nostalgic, innocent love for childhood freedoms. The problem with a dialectic like this one is that duty, when placed as the opposite to freedom, is absolutely unattractive: what’s the point of living a dreary, wind-hardened life if one could be one of the ‘dark deniers’ who summon a ‘muscling life from lovers in their cramp’ (from Thomas’s I see the boys of summer)?  Duty as a caricature is easy to dismiss, and the film doesn’t really escape the fashion of the times in presenting it so.

More interesting is love as a possessive act – that flaw we fall into by mistaking the attraction towards something beautiful with the desire to control it. All four characters exert this very human trait towards the other three: we see flashes of it in Vera’s husband pinning her down to make her agree to marry him, Dylan lying on his bed with both women nestled in his arms, Caitlin demanding that all his poems are hers: even the “freedom” offered by Dylan is at the price of conforming to his personal universe.

It’s a pleasurable film to watch, even if only for the first half, set in wartime London, and Keira Knightley’s face. Whether it succeeds in what it sets out to do is another matter – it’s definitely a film of its time, with its focus on the conflict between freedom/love and duty/marriage the conventional lens of interpretation – and so it can’t but fall short of the ecstatic creations of the real Dylan Thomas.