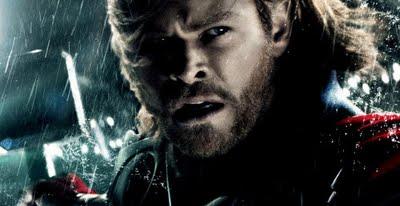 
At the core of every Marvel comic is a morality tale. These comics, born out of the American Golden Age of the 1950s and aimed at the generation of adolescent boys born to the post-War baby boomers, handle themes of manhood and integrity appropriate to that audience. One might argue that in a contemporary culture where men are encouraged to remain boys forever, comic books remain a guiding light for the video game-playing generation, which is perhaps why Hollywood relentlessly churns out comic book-based movies as summer blockbusters. But how do they speak and what do they say to the modern day man-boy?

Comics take their inspiration from all over the place, from high culture to pop culture. In Thor, we find echoes of the battle between good and evil from The Lord of the Rings, sword-in-the-stone coming of age scenarios from the Arthurian legend, and the blockbuster razzle-dazzle of the Transformers films. The characters in this film are taken from Norse mythology, but perhaps the most interesting themes that are developed are Christian ones. At the centre of the story is the parable of the Prodigal Son, with the triumvirate of Odin (Anthony Hopkins) and his two sons, Thor (Chris Hemsworth) and Loki (Tom Hiddleston) as the family of gods in conflict. The gods’ home is Asgard, a celestial realm of golden towers and rainbow roads, where the gods dwell in an impenetrable fortress as guardians of the multiverse. Thor is about to become king when, in a battle with the Frost giants, he proves himself to be far more war-mongering and destructive than Odin would expect of a future king of Asgard. Thor is sent into exile and is parted from the hammer, Mjolnir, the source of his great power. He comes crashing down to earth, straight into the arms of the impossibly fetching astrophysicist, Jane Foster (Natalie Portman). Meanwhile, the jealous and cunning Loki, the younger brother left behind, connives to take the throne from Thor and Odin in an act of revenge for what he perceives to be his father’s favouritism of his brother.

Thor is the ideal that young boys aspire to. Desperate for adventure, rippling with muscles and shouting for justice based on the black-and-white way in which he sees the universe, Thor, to begin with, is the Nietzchian superman, lusting for strength, glory and domination. Odin rightly sees that his son is still a boy and banishes him from the promised leadership until he has grown up. Loki is similar to Thor, although he is more dishonest about his feelings. Neither understands Odin, each believing that proving himself by taking power will eventually win Odin’s love, the depth of which both brothers underestimate.

Kenneth Branagh, the surprising director of the film, understands the central dynamic of the Thor story. He has changed the tone from the comic book, which is less serious and more post-modern in its use of irony. The fish-out-of-water scenario of Thor’s arrival on earth is witty and adds another dimension to which many teenagers can no doubt relate. Branagh retains the corny, comic book dialogue in the Asgardian scenes so that he can juxtapose them with the ‘realistic’ scenes on earth for comedic effect. This clever set piece fails to work, however, on the few occasions when the humans slip into speaking in the same kind of comic book language.

Where the film fails is in the use of special effects. The artificial-looking Asgard is too clearly computer generated to allow an immersion into the world of the story. It is only when Thor comes to earth that any kind of connection to the narrative can be made.

And it is the love story that connects. Thor is saved by the experience of love for the woman he meets on earth. Only when he becomes able to put someone else before his own glory is he able to see what he is really fighting for. His transformation into a person of humility and gratitude, with a willingness to make sacrifices, is what eventually saves him, his friends and Asgard. Portman makes the film work; her charm and fine acting mean that she is able to project the crucial tractor beam of mutual attraction with Hemsworth, even though the scenes depicting their relationship are sparse.

What, then, has Thor taught the man-boy like me? There are a couple of tricky ironies to be considered. First, can a film preaching a Christian message of peace and reconciliation revel in violence as this film does? Well, in Thor’s case the action sequences are so cartoon-like that I do not feel this is too serious a problem. However, there may be a more problematic irony. Despite being aimed at the boys who never want to grow up, the film pushes simultaneously the themes of development and maturity. If the audience really listened to the story, they would probably move on from their comic books and not come back to see Thor in the forthcoming film, The Avengers. Perhaps Branagh is criticising the genre while simultaneously celebrating it. Kenneth, you are a sly, old Loki.