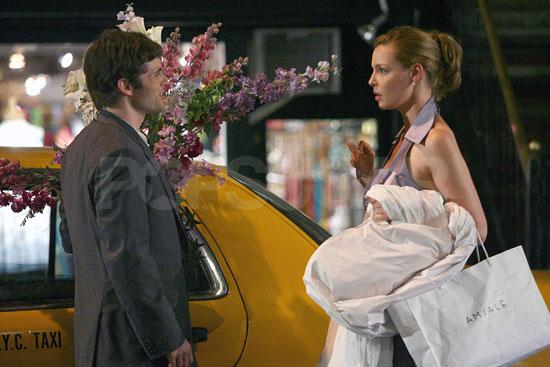 The twenty-seventh instalment of the highly acclaimed 'Dresses' series is yet another provocative treatise on the oppressive effects of the male gaze. No no no, of course not! 27 Dresses is a good old-fashioned glossy grins and gowns romantic-comedy. On this spin of the marry-go-round we meet Jane, a twenty-something woman who loves weddings so much that she's been a bridesmaid at twenty seven of them. You know the deal, always a bridesmaid... until now! It's certainly formulaic and undemanding stuff but in the world of rom-coms that's what we want, it's reassuring. If Hollywood want to present us with a sweet yet loveless girl then, by jove, they've got T-minus 2 hours to get her married.

So far Jane's journey to the altar has been delayed by her secret infatuation for her boss George, a handsome magazine publisher cum philanthropist. Just as Jane decides to tell George how she feels, her flighty, flirty sister Tess comes back from Europe and starts dating him and minutes later they're engaged. Meanwhile, there's a handsome journalist called Kevin who's stuck covering weddings for his paper and spots Jane on 'the wedding circuit'. He sees her story as the feature article that will earn him promotion but falls for her while writing it. Jane on the other hand, dismisses him because of his inexcusably cynical attitude towards weddings.

What's odd about all these characters is how naive and self-deluded they are. Kevin says he's cynical about weddings and Jane believes it, despite reading his beautifully written articles. And when Tess hides her party-girl antics and says she's a nature-loving vegetarian, George doesn't question it, he proposes. As everyone continues to take people at face value, the film's climax isn't building towards true love but merely wising up.

As Jane, Katherine Heigl, best known for her work on TV’s Grey’s Anatomy, embodies the character's generous spirit and her self-effacing charm is disarming and engaging enough to distract from the film's many flaws. The rest of the cast don't get a look in. Ed Burns, perhaps the most famous of the lot, is notably underused. This may be down to 27 Dresses’ tight plotting, its pace spares little time for the character exposition. However, in a rare moment of abandon there's a drunken rendition of Elton John's "Benny and the Jets" in which an entire bar sings misheard lyrics and is a definite highlight.

Although it is to be expected that this Hollywood genre flick be rampantly capitalist, it is nonetheless disappointing. 27 Dresses is yet another movie in which the preparations for a wedding are dominated by consumerism. There are scenes of haggling over cake prices, dress fittings in expensive boutiques, tastings with caterers, and inane yapping about colour schemes.  It even includes the latest must-have setting for wedding prep, a scene in which the characters meander around department stores zapping barcodes to compile the wedding list. Should these things be emphasized above the life-long commitment that forms the heart of a wedding? Well, no. But maybe it should be accepted as part of the spectacle of the genre. Like guns in action films, indulgent, frivolous and expensive weddings are part and beautifully wrapped parcel of the Hollywood rom-com.

Jesus and the Homeless