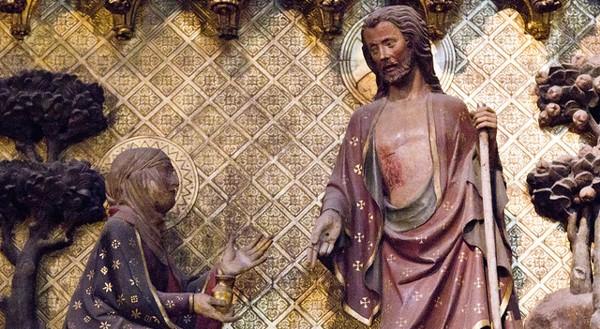 A Lent retreat from our colleagues at Pray as you go and Sacred Space reflects on the ‘Women of the Passion’. Some of them we know by name, others we don’t; but all of their lives were transformed by their encounter with Jesus. For International Women’s Day (8 March), Brian Purfield invites us to participate in that transformation by contemplating the experience of one of these women, the first person to whom the risen Christ chose to appear – Mary Magdalene.

Women play a part in every stage of Jesus’s ministry in the gospels[i] and particularly as his death approaches. Martha and Mary feature prominently in the story of the raising of Lazarus; a woman anoints Jesus with precious oil; Jesus speaks to the women of Jerusalem as he makes his way to the cross; and at his death, Mary his mother is joined by women whom Jesus met later in his ministry. Yet throughout Christian history, the contributions of these women have often been downplayed, ignored or mislabelled. For instance, Mary Magdalene has often been identified as a prostitute, though there is no evidence of this in the New Testament.

In Mark, the male disciples do not understand Jesus’s talk of himself as a suffering messiah. They reject this idea and finally abandon him. The women who followed him from Galilee to Jerusalem suddenly emerge as the true disciples in the Passion narrative. They understand that his ministry was not one of rule and kingly glory but of diakonia, ‘service’ (Mk 15:41). The women emerge as the true Christian ministers and witnesses. While Peter and the other male disciples say they will stick by Jesus and never deny him (Mk 14:31), the women are depicted as more faithful to Jesus as his death approaches. It is the difference between saying and doing. So it may not be surprising that Jesus appears first to the women.[ii]

The women are also the first to believe. Early in his pontificate, Pope Francis said, ‘The Apostles and disciples find it harder to believe in the Risen Christ. Not the women, however!’[iii] Pope Francis grasped this, but it may have been an uncomfortable truth in the largely patriarchal culture of the early Church.

But what does he believe at this point in the story? Is it Mary Magdalene’s report? Is it just the fact that the tomb was empty? Do the disciples believe that Jesus has come back to life, that he has risen? The evangelist adds rather mysteriously that they do not understand as yet the scripture that prophesied he must rise from the dead. This may be why he adds that they just went home.

Where is Mary? She ‘stood weeping outside the tomb.’ Some suggest this is a sign of her unwillingness to believe as the beloved disciple had believed, but it may also be a sign of her great love for Jesus. John mentions twice that Mary was weeping. Perhaps it is intended to be a reminder of Jesus weeping at Lazarus’s tomb (Jn 11:35-36), as if John wants to say, ‘See how much she loved him.’

As Mary weeps, she bends to look into the tomb and sees two figures in white. Notice that the angels did not appear to Peter or the beloved disciple, but to a woman. They ask her, ‘Woman, why are you weeping?’ She replies, ‘They have taken away my Lord, and I do not know where they have laid him.’

Mary turns and, from the darkness of the tomb looks into the light of dawn. She sees Jesus, but does not recognise him. Jesus asks her the same question as the angel: ‘Woman, why are you weeping?’ Jesus adds another, ‘For whom are you looking?’ – echoing the question he asked Andrew and the other disciple at the beginning of John’s Gospel (1:38). The Risen Jesus understands Mary’s grief and gently seeks to help her. Then a curious line: ‘Supposing him to be the gardener, she said to him, “Sir, if you have carried him away, tell me where you have laid him, and I will take him away.”’

How did Mary not recognise the man she had followed for so long? Was she so blinded by grief that she couldn’t think clearly? Were her eyes full of tears (her weeping has now been mentioned three times)? Or does the position of her body offer a simpler explanation? Mary has stooped inside the tomb and, at the sound of Jesus’s voice, peers out. Perhaps she is staring into the bright light of dawn, and Jesus’s body is silhouetted against the light, making him hard to recognise. Or is there a more theological explanation? The glorified body did not have the same appearance as his earthly body. We do not know why, but Mary thinks he is the gardener.

Whatever the reason for Mary’s inability to recognise Jesus, what follows is one of the most tender passages in the whole gospel: ‘Jesus said to her, “Mariam.” She turned and said to him in Hebrew “Rabbouni!”’[iv] Imagine how she must have felt, hearing that familiar voice speak her name. The experience would have been unforgettable. She would surely have repeated those same words whenever she told the story, at first to the disciples, perhaps to the evangelist, and to anyone who would listen, probably until the day she died.

Often we learn to recognise the voice of God in our lives only gradually. St Ignatius Loyola said that the voice of God can be recognised because it is uplifting, consoling, encouraging. In time, we learn to listen for that voice in our hearts; it becomes easier to identify, and when we hear it clearly, it is easier to answer. God’s voice calls us to be who we are meant to be. It called Peter from his nets at the Sea of Galilee, Matthew from his tax collector’s booth, Bartimaeus from the roadside, Zacchaeus from the sycamore tree – and Mary Magdalene from whatever had kept her unfree. The good shepherd calls his sheep by name and they know his voice (Jn 10:11-16).

As Mary reaches to embrace Jesus, he says, ‘Do not hold on to me, because I have not yet ascended to the Father. But go to my brothers and say to them, “I am ascending to my Father and your Father, to my God and your God.”’ That must have puzzled Mary further. Jesus was referring to his Ascension, which would take place in full view of the disciples. As he appears to Mary, Jesus is not in a state where he can be touched – but this changes when he appears to the disciples later. Then Jesus will show that he is corporeal by eating fish before their eyes and inviting them to, ‘Touch me and see; for a ghost does not have flesh and bones as you see that I have.’ (Lk 24:39) Jesus will invite Thomas to put his finger in the nail marks on his hands, feet and side. But not now.

‘Do not hold on to me’, may have another meaning. Mary loves him so much and wants only to embrace him, but Jesus reminds her that the more urgent task is to spread the Good News. As much as we want to cling, in a sense, to profound spiritual experiences, often they are given to us that we might share them. Jesus gives Mary a mission. She runs to the disciples to carry it out and proclaims, ‘I have seen the Lord.’ She recounts all she has seen. She is the ‘Apostle to the Apostles.’ She is the one sent to announce the Good News to those who are sent to announce it.

Mary Magdalene reminds us that the most powerful tool for spreading the Good News is not knowledge, but experience. There is room for both. Scholarship and learning have provided valuable riches for the faith. But the true disciple does not simply say, ‘I have studied Jesus,’ but like Mary Magdalene, ‘I have seen the Lord.’

Further reflection on the Women of the Passion:

Join Pray as you go and Sacred Space in their Lent retreat. Visit https://soundcloud.com/pray-as-you-go/sets/women-of-the-passion or www.sacredspace.ie/retreats/lent2015.

[iv] The name Jesus calls Mary and her response are Greek transliterations of Aramaic, though the evangelist explains that it is Hebrew. Cf. Francis J. Moloney SDB, The Gospel of John, Sacra Pagina series (Collegeville MN: Liturgical Press, 1998), p.528.

Faith and discipleship in the Gospel of Mark