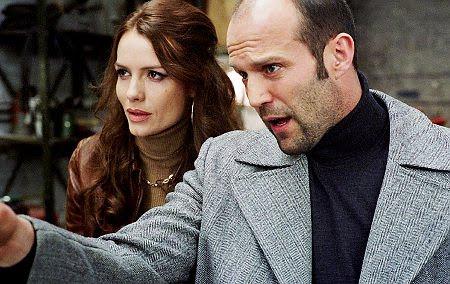 A third of the way into The Bank Job, a strip-club owner rejects the offer of entering into the drug business with a haughty defence of his trade – “Smut, smut and more smut. That’s what makes my world go round.” Smut – one of the great onomatopoeic words (try saying it as if meant something classy – impossible); smut – what the tabloids love to ‘dish up’, as if it were a plate of reheated takeaway dripping in irresistible goo; and smut – what lies at the heart of The Bank Job, the fictionalised retelling of the 1971 Baker Street robbery. More specifically, the photographs of “a royal” (check out this for a classic piece of modern journalism) raunching about in the Caribbean with a couple of lovers, which the government will do anything to reclaim from the hands of a group of opportunistic thieves.

It’s a fun, silly film. Within the first five minutes four storylines have stripped off for the audience and are soon cavorting with each other in a ménage that covers all of the following: kinky civil servants, family-loving East-end dodgy car salesmen, Michael X (the British version of Malcolm – no relation), corrupt policemen, and as much flesh as a Viz editor demands for a bumper edition. In fact, the direction makes the audience complicit in the titillation: whenever the action pauses, we leap to a strip club, or an upmarket gentleman’s bar where topless waitresses provide a cocktail of punishments, or we get a glimpse of the naughty photographs that motivate the bank robbery.

In terms of how it matches up to other British gangster flicks, the reassuring frown of Jason Statham as Terry (Lock, Stock..., Snatch, The Italian Job, Revolver) and the perpetual pout of Saffron Burrow’s girl-next-door/ex-model join up with some decent slapstick and oneliners to place us in familiar territory. A heavy spread of British class humour is thrown on to make sure all the remaining aristocrats get a fair treatment (‘She is a scallywag’, is how a decrepit civil servant describes the naughty princess). Unfortunately the film is undermined by a terribly used soundtrack, which infiltrates nearly every scene with the kind of “tensing music” – crescendos, drum cascades, even the X-Files creepy music at one point! – you’d expect media students in the 1980s to come up with if you sent them to a gritty urban environment and come back only when they had thought of ten ways to make sure people knew they were watching an action movie. The nadir is when a box of chicken and chips is delivered to a drum roll.

Half way through, The Bank Job undergoes a personality switch – within five minutes we go from watching Dave, one of the robbers, being undone by shots of him in an old porn film, to some pretty gruesome violence and language. Although this shift improves the film by picking up the tension, it does add to the feeling that there is too much stuff going on: in particular, the Michael X storyline that supposedly frames the bank plot struggles to hold onto its relevance; meanwhile, back in London, it almost all goes a bit Eastenders for Terry and his wife – ‘You’re right to throw me over. I’ve brought you more grief than happiness. But I love you’. The film ends with some Panorama inspired “based on a true story” statements, and is narrowly saved from being pretentious (and incorrect – four men were jailed in 1974 and nearly half of the money was recovered) by an amusing twist in the “Names have been changed to protect...” caveat.

Where does all this leave the viewer, and in particular, the reader of Thinking Faith? It’s one of those “shrinking” experiences for me:  you enter a 120 minute-long world wherein the most important things are nudey shots of some faceless woman, and success is measured by getting out of London to live somewhere hot. Step out of the cinema and the film washes off with the first glimpse of the sky. It could be a kind of escapism. It might just be the equivalent of reading Jilly Cooper. Either way, make sure your brain is switched to neutral before you begin watching, because smut doesn’t respond well to over-analysis: it likes its consumers to join in with a giggle at the establishment when they get caught with their secrets on display.

A History of Christianity: The First Three Thousand Years