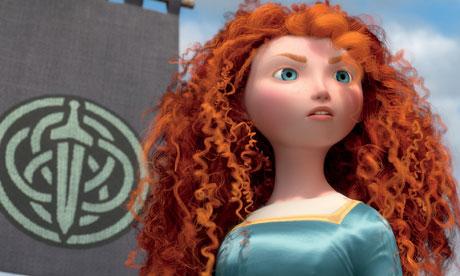 
A cartoon fantasy Scotland, around about the time of Macbeth. Billy Connolly is king, Emma Thompson his queen. They have a daughter, Merida (voiced by Kelly McDonald of Trainspotting, though you maybe shouldn't tell your children that: she's also been in Gosford Park). Merida takes after her dad, is good at horse-riding, archery and can't bear all the maidenly accomplishments her royal destiny – and her mother – requires her to learn. There's also a monstrous bear prowling around, seeking revenge on all those who've had a go at finishing him off in the past, and generally behaving in a manner reminiscent of Beowulf's Grendel. Merida is horrified to discover that she is soon to be betrothed to whomever is the victor of the highland games, and is obliged to resort to magic to change her fate. She's Scottish, she can fight, she's got wild red hair and she knows what she wants.

Thank God for feminism. If it hadn't been for interventions such as Angela Carter's anthology of short stories for adults, The Bloody Chamber (1979) or Jack Zipes' collation of a number of stories for children, Don't Bet on the Prince (1986), things would have been very different. Without these, and books like Babette Cole's Princess Smartypants (1986), all our cartoon princesses would have been saccharine re-workings of the noxiously waspish blonde visions that Disney created in Cinderella (1950), Sleeping Beauty (1959) and – in an imaginatively brunette variation on a theme – Beauty and the Beast (1991).

All of this means that there isn't anything that particularly remarkable now about a film for children in which there is a powerful princess in a central role in a battle against evil, in which her role is to challenge assumptions, break traditions and just change things for the better (we've had Disney's own Mulan, Lyra in Northern Lights in both print and film, and Kestrel in The Wind Singer, as yet still only a book). In fact, if anything, there's something slightly predictable about certain elements of the plot here, most notably where the story draws less from the riches of fantasy and legend than when exploring the mother -daughter relationship (which channels a little too much of the Princess Diaries for my liking).

So the writing of this film is in a slightly different category to that of other recent Pixar full-length cartoons, such as the jaw-dropping drama and emotional roller-coaster that was Toy Story 3. I did indeed just describe an animated film for children as a 'jaw-dropping drama and emotional roller-coaster', but it was: I bet you cried too. I cried in Brave, too, but I think I was alone among the audience in that response – and fortunately hidden on the back row.

And what that shows is that whatever minor shortcomings this reviewer might find are fully compensated for by twisting sub-plots, interlocking details and some lovely characterisations from a team of actors who will be very familiar to British audiences. For this is a ripping yarn, a gripping cartoon adventure with real Scottish accents, a fantasy vision of a comically barbaric Scotland that sucks one in and a cast of a range of characters that will appeal to a wide family audience. As Thirza Wakefield points out in Sight and Sound, Brave is also the product of further technical developments in digital animation, and is Pixar's first opportunity to deploy some new software packages (including a new patented 'hair simulator'...); the verisimilitude of the landscape is similarly stunning, the work of a dedicated team of animators.

Two very small points: stay to the end of the credits for a joke that only the usher and I were around to laugh at; and sharp-eared members of the audience will notice that when composer Patrick Doyle needs to add a bit of subtlety and expression to his score, he turns to the uilleann pipes (which are, of course, an Irish – not Scottish – instrument). Having started this review with some thoughts about the representations of the female in cartoon films for children, that last comment could lead to some questions about how studio animation copes with questions of ethnicity: how nice to have Scottish actors putting voice to animated Scottish characters, but how long before Eddie Murphy and Chris Rock act cartoon feature characters who aren't comedy donkeys or zebras?

A Reflection on Jesus’s Leadership