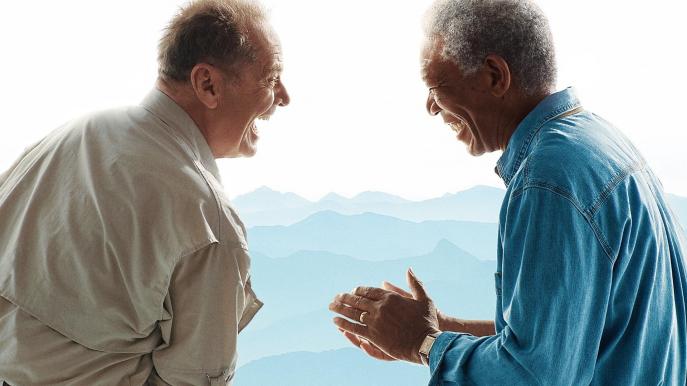 
The Bucket List is about two old fellas who are both given a year to live and so draw up a list of things to do before they “kick the bucket”.  It’s nowhere near an original idea, but it is one that everyone can relate to and everyone wants to enjoy.  Coupled with the directorial talent of Rob Reiner (This Is Spinal Tap, When Harry Met Sally) and the effortless charms of Jack Nicholson and Morgan Freeman in the lead roles, this film would seem to be brimming with potential to succeed.

However, the mournful result is that The Bucket List will never ever get on anyone’s ‘Things to do before they die’ list.

The problem is that the film is hugely hypocritical.  Naturally, the characters come to espouse a “carpe diem” philosophy.  In the shadow of death their recalibrated ambitions turn towards doing new things, experiencing genuine beauty, taking risks.  But the reality of their journey is the exact opposite.  First off, the items on their list are not new, they’re trite movie clichés: get tattoos, go skydiving, drive shiny red sports cars, and travel the world.  Granted, these things could be fun but they’re about as obvious as a lottery winner buying a mansion or a cop breaking rules to get results.  If this is a virtuous way to live then why didn’t the screenwriter also strive for originality? The film is trying to teach its characters lessons that it doesn’t understand.

Secondly, if you want to experience something truly beautiful then travelling the world may very well work.  Buried beneath this cliché there is a mound of truth.  Think of all the awesome places, of all the animals on Earth: Did you know there’s a frog that freezes solid during the winter and thaws out as the temperature rises in spring without any damage? Or that in California there’s a forest of trees all wider than an average room and taller than Nelson’s Column? Of course, if you were less imaginative you’d visit the pyramids in Egypt or the Great Wall of China, you’d go on a safari or climb Mount Everest.  This is what the characters do and I’ll forgive them because as dying men they probably couldn’t spare the extra five minutes it would’ve taken to think up some fresh ideas.  But wait, they didn’t go! Jack and Morgan romp about in front of some shockingly crude CGI backdrops.  Even the most casual of viewers will notice.  It’s a brutal distraction.  So much for experiencing genuine beauty…

Finally, if the filmmakers think it noble to take risks in life, they should have the conviction to take some in their script.  Jack Nicholson and Morgan Freeman are typecast almost to the point of self-parody.  Jack’s a lovably offensive rascal and Morgan’s a reassuring, wise old man – he even opens the film with another one of this trademark godly voiceovers.  However, because Nicholson and Freeman are automatically likable, this one isn’t that bad.  Still, mixed in with the rest of the film’s hackneyed components they do lose some of the audience’s good will.

But it isn’t all bad.  The tone is sincere, and the first half of the film is spent in a hospital room as the characters get to know each other.  It’s nice, and rare these days, to let a movie friendship grow over time.  And in spite of everything, Nicholson turns in a convincing performance as a suffering cancer patient.  There’s also a surprise from Sean Hayes.  He’s best known for his staggering achievement of being the most annoying one out of the really annoying sitcom ‘Will & Grace’, and in playing Edward’s manservant, goes to the other extreme.  His performance is so understated that you probably won’t recognize him at first.

This could have been a great film and that’s what is so disappointing.  The real cause for all this harsh criticism is that it is exploitative.  Because so many people experience cancer, this film may well steal a few tears.  But with its set-pieces such as fatal diagnoses, bittersweet eulogies, family reunions, not to mention the blubbery soundtrack, The Bucket List simply doesn’t earn them.  Often films like this are a pleasant reminder not to get blinkered by the daily grind, so it’s regrettable that The Bucket List is run-of-the-mill.