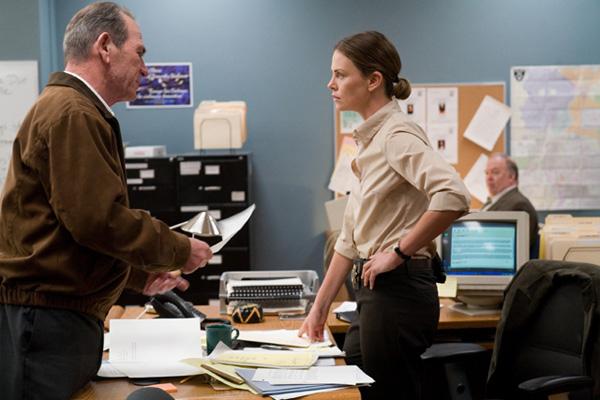 
About half-way through the film, just as we’re beginning to ask why exactly it is called In the Valley of Elah, the question is answered, unexpectedly during the reading of a bedtime story.

Tommy Lee Jones’s haggard ex-military policeman has by this point teamed-up with the newly-promoted and (for this part of new Mexico) innovatively female detective (Charlize Theron): she’s a single mother battling sexism in the force, he’s an old soldier hunting for the killer of his son (just returned from Iraq).  She extends friendship to the old man, giving him dinner one evening; but rather than let him do the washing up, she asks him to read her eight-year-old son a bedtime story.

Now there’s a blurry boundary if ever I met one.  I’m not sure if any of the mothers reading this site would be generous enough to invite a man they’d only known for a couple of days to read the Lion, the Witch and the Wardrobe to any of their children.  In my life, it’s one of the intimacies which mark being a godfather and an uncle, a stand-in quasi-father.  What motivation lay behind this apparent kindness?  Her need for a man in the life of her son?  Her offering her son to make up for his two dead boys (one killed in a military accident, the youngest—subject of the film—chopped up into small pieces and burnt on the outskirts of the nearby army base)?  Maybe she’s a good judge of character.  Maybe this carelessness with intimacy explains something about the disappearance her ‘dead-beat husband.’

The point is that the old man cannot cope with C S Lewis.  So he tells the story of David and Goliath.  Nicely, it is told in military, not religious, terms: he describes the orientation of the field of battle, the disposition and posture of the opposing forces, Israelite and Philistine; he reminds the boy that there are ‘rules of combat’.  And the little boy is captivated.

But who is David?  Who Goliath?  Where is the Field of Elah?  Are we meant to see the old military policeman as David, in search of simple truth and battling the vast machine of the army’s closed-ranks? Is David the lone female cop fighting ignorance and bigotry?  Is David the little boy, the little Iraqi boy, standing in front of an American personnel carrier, doing his bit for the insurgency?  Is David the little boy asleep in his bed somewhere in America, waiting for the opportunity to show his courage?  Is David the boy solider, challenging his fear, taking a stand for freedom?

The film, in an agreeable way, allows these questions to float unanswered.  The result is a resolute failure to ‘point the finger’ (a demand made of director Paul Haggis by Sight and Sound magazine), a resolute decision to show an America which has found the whole experience of Iraq one of humiliation and confusion—and confrontation with the darkest realities of what happens when war goes wrong, when young men’s violence is let run without proper control.

The old man finds himself, for the first time no doubt, genuinely questioning his rôle as a father.  What has he done?  Led a life which now means his wife is robbed of both her boys.  Brought up one to value a profession in which appalling realities are created in the name of horribly abstract notions:  freedom, justice, democracy.

The relationship between Lee-Jones and the little boy goes nowhere, further adding to our feeling of disappointment, confusion, and a sense that nothing good is coming out of this mess.  Furthermore, at the end of the film when the old man leaves his son’s room on the base for the last time, he passes the desperately young new recruit, a mere boy, who slides noiselessly into the space made by his dead son.

There is, however, no heroic moment of cheap Hollywood conversion.  This old solider cannot betray what he is.  His imagination still demands the language of patriotism: so there is no burning of the Stars and Stripes in this film, there is no finger pointing or condemnation, there is no magnificent uncovering of conspiracy and the cover-up that the script cleverly teases us with.  Instead, in a statement of ambiguous patriotism: the last image is of the Stars and Stripes, tattered and battle-scarred, flying upside down, a sign to the world that “we’re in a hell of trouble so come and save our ass, ‘cos we don’t know how to do it ourselves”.

Considering Synthia: what is synthetic biology all about?