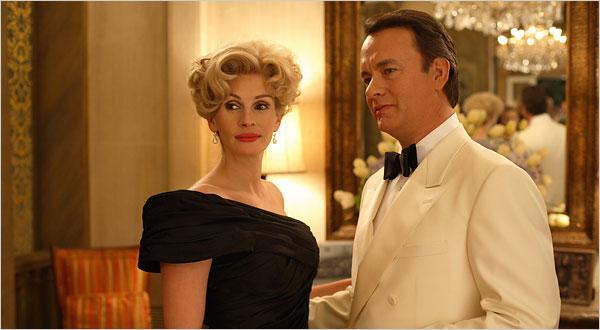 
Caesars Palace, Las Vegas, 1980:
in a Jacuzzi with a Hollywood producer and three beautiful naked women,
Congressman Charlie Wilson (played by Tom Hanks) discusses a proposal for a TV
soap opera, which will be 'Dallas comes to Washington'. The alleged use of illegal substances by
this happy group is a vexation which later threatens Wilson's career, but he
sees off the investigators, aided by the solicitous pretty women who staff his
office. I was tempted to refer to these as "Charlie's Angels", before I read in
George Crile's book (on which the film is based) that Washington had got there
long before me.

These camp cultural references
just about sum up the eponymous hero of Charlie
Wilson's War. His partner in clandestine crime, a disgruntled CIA operative
named Gust Avrakotos (Philip Seymour Hoffman), is more fun, if 'not exactly
James Bond'. We are introduced to him, "mightily pissed" with his boss because
he didn't get the job of Head of Station in Helsinki, on account of his lack of
diplomatic finesse. Avrakotos rather proves the point by smashing his boss's
office window (for a second time!), though since he had spent three years
learning Finnish perhaps his frustration is understandable.

The film charts the unlikely but
true alliance of playboy congressman and crumpled spy, which allegedly turned
the odds in Afghanistan, and eventually brought the Soviet empire crashing
down. "CHARLIE DID IT", trumpets the slogan with which Wilson is feted by the
CIA, and I presume it is the incongruity between his whiskey-sodden frolics and
such a historic destiny which is supposed to provide the film's charm and
interest. There is a stock 'conversion', when a shocked and tearful Wilson
visits maimed children in a Pakistan refugee camp. This could have been a
turning point, if it wasn't undermined by Wilson's confession, in the next
scene, of how he got into politics as a thirteen year old: by mobilising the
electorate against a town councillor, the neighbour who had killed Wilson's
dog. 'That's when I knew that I loved America'.

Part of my problem is that I have
never forgiven Tom Hanks for Forrest Gump.
Here he is at it again: nothing like as much sentimentality, but the same
reactionary message underneath the top layer of confectionery. The overt moral
is right-on: Avrakotos uses a Zen parable to intimate to Wilson that the defeat
of the Soviets in Afghanistan may yet have a sour ending, and the contrast is
well drawn between the massive enthusiastic funding of the mujahadin and their armed struggle, and the miserly amounts given
over to the reconstruction of Afghan schools after the Russian withdrawal.
Wilson fears for the legacy of alienated Afghan youth, and of course he is
absolutely right.

But looking through Charlie
Wilson's eyes is not, ultimately, a very wholesome experience. Even Crile's
book takes timeout to imagine things from the Russian side: the terrifying fear
of being captured alive by the mujahadin,
for example. The film, on the other hand, demonises the Reds throughout, and especially
by a few moments of dialogue (sexist and cynical) between Soviet helicopter
pilots as they strafe Afghan villagers. The glorification of clandestine,
CIA-inspired heroics mixes in El Salvador and Nicaragua: perhaps 'Oliver North:
Man of Destiny' should be the sequel. As with the "damned Commie bastards", so
with the women: Julia Roberts is embarrassingly underemployed as Joanne
Herring, Wilson's rich and rabidly conservative patroness; a subordinated role
which underscores the pervasive misogynist tone.

What does play out nicely is
Wilson's naiveté in the face of the religious dimension. He has little time for
the God-botherers: when, for example he fobs off a Texan constituent who wants
to erect a Christmas crèche on public property, or when he tells Joanne Herring
to tone down the evangelical rhetoric of her fund-raising speeches. Wilson
looks all the more at sea, therefore, when surrounded, like Lawrence of Arabia,
by crowds of tribesmen chanting Allahu
Akbar. Here you do get a sense of America being initiated into a whole new
world, where the frontiers between sacred and profane are no longer clear-cut.

The final strap-line portentously
cites the real-life Charlie Wilson: "These things happened. They were glorious
and they changed the world. And the people who deserved the credit are the ones
who made the sacrifice. And then we fucked up the endgame." Which is a big problem, if the film's
intention is to draw a parallel with the current American involvement in
Afghanistan and Iraq; at least for those who think the latter was a screw-up
from the outset, and not just the 'endgame'. Charlie Wilson's War undoubtedly
tells a remarkable story. But the feelgood message: that American success in
the global arena is achievable with intelligent and ballsy politicians who are
ready to play fats and lose with the rules is a disturbing one, not least in an
election year. 'Charlie Did It'. They wish.

Magic in the Moonlight