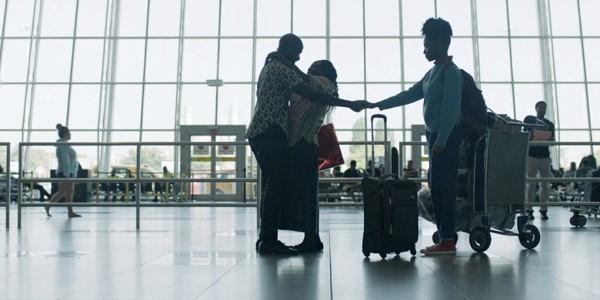 One of the lesser-known side-effects of the systems put in place by Western governments to process claims for asylum and refugee status is their capacity to put lives on hold. Initial interviews, the gathering of documentation when official papers may have been mislaid by those fleeing for their lives or destroyed in war-zones, and a first judgement to grant, or not grant, a right to remain, are only a first stage. Appeals against negative verdicts can drag on for years, leaving a claimant suspended in a citizenship limbo. Even after that, attempts to reunite scattered family members can prolong the process before anything like a new ‘normal’ life can be established.

Farewell Amor, a film by director Ekwa Msangi, considers the results of putting lives on hold in this way. It starts with a reunion at New York’s JFK airport. Walter (Ntare Guma Mbaho Mwine), a refugee from the aftermath of Angola’s civil war, has gone to meet his wife Esther (Zainab Jah) and daughter Sylvia (Jayme Lawson). It is seventeen years since they last met, when Sylvia was an infant, since it has taken that long to get permission for Esther to join her husband. In the course of the film, we see this reunion three times, as the starting-point for the different perspectives of the three main characters on the initial months of their attempts to live as a family.

Walter is a taxi-driver, living in a small apartment in Brooklyn – the living-room has had to be relinquished so that Sylvia has somewhere to sleep. In one of the few scenes in the film to show events preceding that airport reunion, we see the nurse who has been living with him leaving to make way for his wife. Esther, by contrast, has remained strictly faithful. Her support has been religion – ‘She married Jesus!’, Msangi remarked in an interview – with the result that she fills the apartment with the sound of her extempore prayers, covers the walls with religious images, and looks suspiciously on Sylvia’s new friends as likely agents of Satan. Central to the film is the question of how people adjust: to new situations, new cultures and above all to loved ones when they change.

Readers of Thinking Faith will be interested in the role of religion in its story. Initially this seems unpromising. Near the start of her stay in the United States, Esther takes her husband and daughter to a Pentecostal prayer gathering. While she sways and sings, they sit either side of her, looking bored and embarrassed. She arranges a money transfer of $1,000 (her ‘emergency money’) back to her congregation in Africa as an offering, money that was sorely needed by the overworked Walter. And she judges American culture harshly in the light of her faith. Later, though, there is more of a recognition that it was that same faith that has enabled her to survive the last seventeen years, with a small daughter to bring up alone. There is even a suggestion that as she adjusts to her new situation, her faith become no less important but somewhat less acerbic.

While religion is at best an ambivalent force in the film, it is dance that is the great liberator. The music of Angola floods the soundtrack of many of its key scenes. Walter speaks of dancing as the one time when he can truly be himself, and entering a dance competition is Sylvia’s way into the society of her new school. We are given to understand that Walter and Esther loved to dance before they had to leave their homeland. Now, although she regards it initially as the devil’s work, the viewer is invited to wonder whether she can move beyond this.

Just occasionally the film veers towards cliché. Once it became clear that the final of the dance competition was to be a head-to-head confrontation between Sylvia and the school’s established champion, the outcome was never really in doubt. And one of the questions running through the production is whether Walter and Esther will decide to stay together. But the unfamiliarity, to this viewer anyway, of a Portuguese-speaking Angolan cultural environment, and the refusal of the director to present easy answers, ensures that interest is maintained.

Msangi, who is herself of African origin but has lived in the United States for the last twenty years, based the film in part on the experience of an aunt and uncle of hers who are still waiting to be reunited after a separation of twenty-two years. It would have been easy, perhaps, to provoke an audience to anger at a situation so clearly unjust. Her film, though, is much less strident than this. It evokes pity, rather, at the waste of human potential, and admiration for the indomitable spirit that enables people to live productive lives while waiting. Those of us who don’t experience our relationships being put on long-term hold by impersonal government forces may come away from the film with much for which to be grateful.

Hotter than fire: the deaths of migrants in the Mediterranean