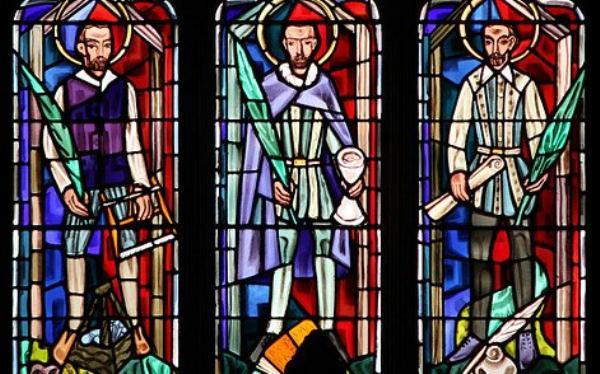 St Edmund Campion, St Robert Southwell and Companions are remembered by the Society of Jesus on 1 December, but how does their martyrdom inform our lives as followers of Christ today? ‘Perhaps when questions are resolved and peace is restored the impact of martyrdom becomes weaker’, suggests Fr John O’Connor OP.

A couple of years ago I read an article by Nicholas Lash, entitled ‘What Might Martyrdom Mean?’

A good question, that. There is a fairly obvious way of answering it, in high-minded, abstract terms. But perhaps the important question is: what might martyrdom mean to us, what role does it actually play in our lives, in our personal and collective understandings of what it is to be a follower of Christ? Reflecting on the Feast of St Edmund Campion and the English Jesuit Reformation Martyrs, I found myself asking these questions of myself.

Of course, each person’s story will be different, depending on upbringing and circumstance, as well as personal temperament. But I remember once being a little surprised at a non-Christian friend telling me that Catholic churches give great prominence to the martyrs, and so we Catholics must have the spirit of martyrdom in our blood.

I grew up in Ireland in a devout, practising Catholic family, solid in its faith but relaxed in its way, tolerant and at ease with itself. My family was also very moderate in its politics. It was only when reflecting on martyrdom for this feast that it struck me that in spite of the fact that religion and religious identity played a much greater role in my upbringing than politics, it was the political martyrs who were far more prominent in my early years and in the imagination of the general population, than those who had died for their faith. Of course, I knew about St Oliver Plunkett and those who suffered under the penal laws, but at school, even in politically relaxed Galway, it was Robert Emmet and Wolfe Tone, Connolly and Pearse who were spoken about more - mainly in history lessons, admittedly - and who were put forward as the key markers in the common story.

I suppose it was because religious persecution had long gone that Oliver Plunkett did not grip the collective imagination as the political martyrs did, for the political questions were still ongoing and not resolved. Perhaps when questions are resolved and peace is restored the impact of martyrdom becomes weaker. In that respect, at least, that it is weaker is a good sign, a sign that we live in peaceable times. But do we not in our forgetfulness end up the poorer for it in certain ways, neglecting large areas of human experience and sources of insight into the sort of creature we are? We become a people living in the present as if yesterday never happened, as if things were always like they are now.

But, then, what happens when future ages try to appropriate events far from what they have personally known, generations who have never experienced religious persecution and who have only known stable democracy? Can we manage to do it without distorting the reality we are trying to do justice to? In asking this sort of hard question I hope to be like one of those priests who say in confession, ‘If you’re honest about it, you stand at least some chance of overcoming it’. If we realise the problem, then even if we are in error, the error does not go the whole way down.

The poet and Anglican priest, R.S. Thomas, asks this sort of question in a poem addressed to Christ. How are the ideas, concepts and stories that make sense at one time and in one context to make sense to future generations?

You chose the natural timber
to die on – that the natural
Man should be saved. What bough,
then, will need to be crossed
and what body crucified
upon them for salvation
to be won for the astronauts
venturing in their air-conditioned
capsules?

He ends, not with an answer, but a question:

They are planning their new conurbations
a little nearer the stars,
incinerated by day - and by night
glacial; but will there be room there
for a garden for the Judas
of the future to make his way through
to give you his irradiated kiss?[1]

The poem reminds us of how distance in time and circumstance can bring about a change in how we see ourselves and the world. We have met wood and trees and gardens, but even we, far from our perhaps outer space successors, have to make an effort with the context of Christ’s day. And so the challenge of keeping the memory of the martyrs alive and active in our hearts and minds is not something we ought to take for granted, but is something we need to work at.

And the challenge is this: how are we to keep alive and active in our hearts and minds what those such as the great sons of the Society of Jesus - Edmund Campion, Robert Southwell, Alexander Briant, Henry Walpole, Thomas Garnet, Edmund Arrowsmith, Henry Morse, Philip Evans, David Lewis and Nicholas Owen, the maker of priest hiding holes, plus another 16 beati - witnessed to? How do we do so as people who are honest about the fact that we are products of our age, grateful for the many advantages of our time, whilst not being forgetful that it was not always thus and so, and, who knows, might not be like that in ages yet to come?

Edmund Campion was a man with the whole world at his feet, who took the Oath of Supremacy, acknowledging the monarch as the Supreme Governor of the Church of England, and who had the honour of welcoming Queen Elizabeth to the University of Oxford two years later. Yet he sacrificed all that and so much more. Having rejected the Oath of Supremacy and become a Catholic priest of the Society of Jesus, he returned to England. After his subsequent arrest he found himself imprisoned for several months, put on the rack and executed at Tyburn on the grounds of plotting sedition against the throne; yet he viewed himself as both a loyal subject, properly understood, and a faithful disciple of Christ.

And so we come to Christ and to another question. If the cost and reality of martyrdom risks drifting to the peripheries of our minds in comfortable times, do we not also risk doing the same when it comes to what Jesus Christ suffered for us on the cross? We may have put aside the over-emphasis on suffering that past generations succumbed to, and rightly so; and we may be at peace and live in a spirit of respect for our Christian brothers and sisters with whom we are not in full communion, and, for that matter, those who adhere to other faiths and none, again rightly so.

In times of concord, at least some of us risk forgetting the martyrs in the sense that really matters, but in so doing we risk forgetting the cost that has been paid for our peace and freedom and so risk devaluing the peace and freedom we enjoy. We thank God for the grace of Edmund Campion and his brother martyrs, and let us celebrate our peace and our freedom with something of the gratitude that they deserve.

This article is adapted from a homily delivered at Campion Hall, University of Oxford on the Feast of St Edmund Campion, 2011.