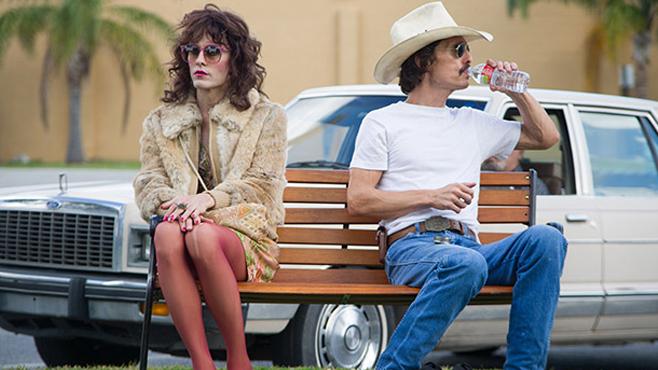 Welcome to the rodeo. It’s a short ride and you do your best to cling on, to make it last as long as you possibly can; but inevitably, everyone falls, some sooner and more suddenly than others. So it is fitting that we meet Ron Woodroof (Matthew McConaughey) here, at the rodeo. It’s Dallas, 1985, and Ron is a rodeo man living a life as fast and carefree as it is to be short. He is wading through a haze of cocaine, alcohol, gambling and sex and appears to be enjoying it, taking a macho pride in his exploits and stamina. Whilst these opening scenes themselves offer absolutely no indication of what is to come, they still possess a powerful sense of dramatic irony for those audience members for whom this film’s reputation precedes their watching of it. As we observe Ron in his element, we see doors closing and darkness approaching, even if he does not.

And then comes the news. After collapsing, Ron is taken into hospital and his bloodwork paints a deathly picture: a T-cell count so low that the doctors are shocked he is even alive, and a diagnosis of HIV. What emerges at this point is just how misunderstood HIV/AIDS was at that time; even the doctor seems to think it is a disease contracted only by homosexual people and intravenous drug users. In 1980s Texas it would have been seen by many as a plague afflicted upon the wicked, and Ron’s reaction is in keeping with this; he asks the doctor, ‘Do I look like a faggot to you?’ and threatens to ‘whoop [his] ass’. Matters only get worse when Ron is told that he has 30 days to live. His masculine pride still reeling, he throws the medical charts in the air and declares that nothing can strike him down.

It doesn’t take a great many days for Ron to realise the gravity of his situation, and this is exhibited neatly through the use of a countdown-style series of captions (‘Day 1’, etc.) that drive home how short 30 days really is when it is all that is left between a person and their perceived oblivion. And then his battle begins, a battle which leads him through an unhelpful course of AZT (which at the time was the only HIV treatment approved by the US Food and Drug Administration [FDA]); across the border into Mexico in search of alternative drug treatments; back up into the US with supplies of said alternative treatments; and, subsequently, to founding the Dallas Buyers Club with an unlikely partner, a transgender fellow patient called Rayon (Jared Leto). It followed the model of other Buyers Clubs that had cropped up elsewhere in the country: patients pay for membership to the club and then receive drugs free, thereby avoiding the laws that prevented these drugs from being available officially in the US, laws which were enforced aggressively by the FDA and strongly backed by pharmaceutical companies.

The ensuing battle between powerless patients and an omnipotent leviathan is one of the defining themes of the film. This group of dying people seek access to therapies that undeniably help them but they are opposed at every turn by the seemingly vindictive and bullying FDA, personified with perfect spite by Michael O’Neill. The system appears to be more interested in defending the interests of the pharmaceutical company, whose AZT drug is sold at $10,000 per patient per year, than in facilitating treatment for severely ill people. Unfortunately, this seems to be an all-too-familiar example of a government agency risking the wellbeing of the public for the sake of an alliance with big business.

The film uses this theme to draw an interesting parallel between Ron’s inner and outer struggles. As he battles the forces of oppression and inequality externally, his internal fight is against not only his illness, but his long-held prejudices, too. At the beginning of the film we meet a homophobic, misogynistic man with a very narrow view of the world; but over time, and through a shared affliction and common goal, he becomes accepting of people and starts to look further and deeper than external behaviours. This is clearly intimated through his development from a hustler who peddles treatments strictly for cash, to a campaigner and defender of the rights of ill people; and also in his relationship with Rayon, played with aplomb by Jared Leto, with whom he forms a close bond. One of many moving scenes in the film details Rayon’s visit to her estranged father shortly after the FDA have seized most of the Club’s drugs and money. He seems more pleased that Rayon has worn men’s clothes than he is to actually see Rayon; when Rayon notes this drily, her father exclaims, ‘God help me!’ to which Rayon responds, hurt, ‘He is helping you. I have AIDS.’ This line encapsulates the rejection by and isolation from society that the HIV community felt. Shunned by their parents, abandoned by the government, spat on by society at large and smote by the latter’s definition of their god, who had they left to turn to but themselves?

Dallas Buyers Club is inspired by the true story of Ron Woodroof, and although the film may have played with the facts a little at times, there is a lot of truth to be found. Matthew McConaughey is outstanding, playing Ron with a subtlety and tenderness that acknowledges all the shades of grey in life. There is also a powerful and abiding message beneath the film’s impressive surface. The narrative ends with a caption saying that AIDS is not over and, given the film’s portrayal of the FDA, one is forced to draw parallels with the current situation in which pharmaceutical patents prevent millions from accessing life-saving treatments for the disease. It appears the science has moved on, but the profiteering has not.