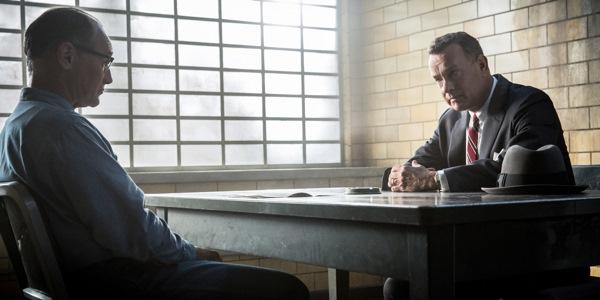 Bridge of Spies is a Cold War thriller structured around the infamous ‘U2 incident’ of 1960 when Francis Gary Powers, an American pilot charged with taking clandestine photographs of Soviet military installations, was shot down over Soviet air space and captured. The film sidelines Powers slightly to focus on the story of his Soviet counterpart, Rudolf Abel, for whom he was exchanged at the Glienicke Bridge over the Havel River in Berlin (which accounts for the title). Spielberg makes this a very personal story, and one with great relevance for the modern age, by focusing on the New York attorney asked to defend Abel in court and later negotiate his exchange.

Although the historical context is important to the thriller, politics takes a backseat to character, and the tension relies on the intelligence and integrity – or lack thereof – of the individuals. Tom Hanks takes centre stage as James B. Donovan, the insurance lawyer and family man who finds himself plunged into the world of international intrigue with only his wits and self-confidence to determine whether he will sink or swim. Hanks can always be relied upon to turn in a solid performance and he does not disappoint, creating a character who is at the same time admirable and entirely ordinary.

Donovan’s merit lies not in any extraordinary ability but in a dogged persistence to stay true to American values, and the beauty of focusing on such a character is that it allows us to see the possibility of imitating his fortitude in our everyday lives. Bridge of Spies is very much a movie about American values, and as I watched the film I found myself reflecting on how deeply those values are rooted in Christian humanism – though I imagine this was not the intention of director Steven Spielberg, or of the Coen brothers and their British co-writer, Matt Charman.

Chief among these values, enshrined in the U.S. Constitution, is a fundamental belief in the dignity of every human person. As I listened to Donovan defending his actions and appealing for the rights of his client, I could hear in his words a plea to the Americans of today not to forsake their values in the face of fear or for the satisfaction of personal desires, a plea to remain true to the ideals of justice, tranquility and liberty envisioned by the founding fathers. Donovan’s steadfast commitment to those beliefs in the face of social and political pressures is a timely reminder that laws not only protect us from those who seek to harm us, but they also protect society from itself when its members get carried away with fear or patriotic fervour.

However, I think in one respect the movie goes a little too far. More than once, Donovan refers to Abel as ‘a good soldier’, and there is an implication throughout the film that Abel was merely a man serving his country, as though there is no difference between the soldier who risks his life on the battlefield and the spy who betrays the trust of the society in which he lives, regardless of whether or not he is a citizen of that country.

Historically, espionage has been a reviled practice, and those caught spying have not been accorded rights as prisoners of war and were often summarily executed. The Cold War somewhat altered that feeling regarding the role of spies, and undoubtedly fiction – both in print and on screen – has had some effect there as well. However, the face of war is changing and our greatest threat now seems to come not from visible militants but from those in our midst who pretend to be part of our society while planning to do us great harm, whether through individual acts of violence or coordinated terrorist attacks.  To portray such insidious work as a normal and praiseworthy part of international relations encourages acceptance of activity which attacks the vital bond of trust that exists between persons in a society. I suspect, however, that this tendency in the film comes from a desire to humanise Abel, combined with the difficulty of separating a person from his actions, rather than any conscious effort to engage in a conversation about acceptable forms of combat.

Overall, Bridge of Spies is a good, solid film, as one might expect of anything coming from the hand of Steven Spielberg, who above all is an excellent craftsman. It is intelligent and well-written with believable if ordinary characters, good pacing and plenty of humour. It may not go down in history as the most memorable film in the impressive oeuvres of Spielberg or Hanks, but it is two and a half hours well spent.

St Henry Morse SJ: ‘A saviour of life unto life’
Alfred Delp: committed to Christ
Persepolis
‘The Fight Between Carnival and Lent’
Ignatius and the Stars