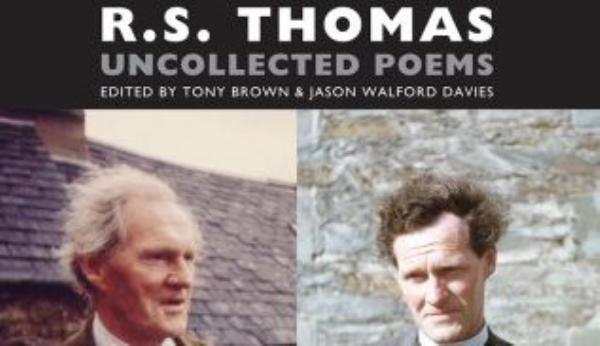 This year is the centenary of the birth of R.S. Thomas (1913-2000), an extraordinary poet and Anglican priest. Thomas, indeed, was many things – craggy, awkward and Welsh. His poetry does not justify, comfort or decorate, but struggles to stay in touch with truth and, as a late poem puts it, to attend to ‘a spell/woven by consonants and vowels’.

Tony Brown and Jason Walford Davies have painstakingly put together approximately 140 of the best of Thomas’s published poems which, for whatever reasons, were not included in any of his collections. Some were published after his death – the given dates of publication range from 1939 to 2010,

Thomas probably wrote over 1,000 published poems – an extraordinary average rate of one poem per fortnight. In 40 years of ministry he must have preached around 2,000 sermons. The texts of his sermons seem not to have survived (I have not seen references to them), but there are a few poems about the curious activity of preaching. No doubt ‘the imagination’s heydays’ of ‘The Big Preachers’ (1983) ‘will not return’, so ‘the facts’ – in a duly ambiguous thrust – ‘must do for us’. But in ‘Gwalter Mechain’ (1990), the preacher climbs weekly ‘into the crow’s nest’ and tells the congregation ‘of the glimpsed land, / trying to believe in it / himself’. The belief and unbelief of both Thomas and his society wrestle here continuously and creatively.

However, Thomas’s poetry is not simply about the absence of God and the presence of the English. It is about the kind of ‘god’ that God might be, and the related issue of the kind of society we fashion and which inevitably has a heavy hand in fashioning us. So his poetry is also about Christianity. It is striking that the cross and the Eucharist are recurrent and almost stabilising themes in Thomas’s poetry. In ‘Vocation’ (1970), the anchors are birth and death, burial and baptism; ‘One drop of blood’ (2009) ends with, ‘One crumb of bread / in the smudged palm dazzling me.’ In ‘Easter, I approach’ (2009) the feast is present, ‘for faith’s finger tips to explore’.

Thomas’s God is frequently disconcerting. ‘God leers’, we are told in ‘Dreams’ (1998), ‘out of the nuclear cloud’, for which God ‘has been waiting from the beginning’. ‘Leers’ may have the old meaning of looking askance, but there is also the more disturbing contemporary sense of the lewd and the slippery. Nonetheless in another 1998 poem, ‘Everywhere’, the ‘heaving of the water’ is God ‘breathing’ and the sky is God’s face ‘gazing’. The leer has gone and God is present, for the time being, in a benign and benevolent creation. It may be that in his later years Thomas was only doubtfully orthodox, but even his unorthodoxy has a graceful capacity to question believers who are unduly set in how they engage with life. There is a strange reassurance in finding a familiar Thomas in these poems.

Thomas’s thrawn relationship with his hill farmer parishioners seems to have been a complex encounter in which love and understanding emerged out of a mixture of respect and distaste. It is good to meet the hill farmer, Iago Prytherch, again and, in ‘Island Boatman’ (1998), to encounter a later, seagoing version with a recognisable and related outlook. One poem close to these characters is in Welsh: ‘The Peasant’ (1950) in Davies’s translation, is a marked pearl in this ‘uncollection’. Thomas learnt Welsh only late in life – it was not a childhood possibility – and almost inevitably wrote poetry in English. And his first wife, Mildred Elsie (Elsi) Eldridge (1909-91), never learnt Welsh. The precise effect of the absence of his ‘mother tongue’ on Thomas’s poetry is uncertain: there is a clear sharpness in reading ‘Language has run its course’ (2010) and stumbling over the ending: ‘...now, anaemically, / it is my own fingers that bleed.’

The pull and physicality of Iago and the landscape of Wales (to say nothing of the language) clearly held Thomas in thrall. In Wales and abroad there was also sensuality and sexual desire, a simple yearning and a wry recognition – for example ‘Yesterday’s Farm’ (1964) and ‘Chat’ (1971). But in a very different key, two early poems – ‘I never thought’ (c. 1939) and ‘July 5 1940’ (1940), which are clearly about Elsi – catch the sheer surprise and vulnerability of loving, and of being loved. It has been suggested that Thomas’s poetry about Elsi can illuminate his familiar struggle with a God who is present and absent (see R.S. Thomas: Poems to Elsi, ed. Damian Walford Davies [Seren, 2013]). If there is any truth in this, it may point to an unsettling and unsuspected wholeness in Thomas’s poetry.

There is a happy and revealing curiosity in the given text of a fine 1998 poem, ‘Blackbird’. God chooses the blackbird to convey God’s thought in song and does so ‘with peculiar charity’. The only other printed version I have seen (in Ruth Padel’s The Poem and the Journey) has ‘with peculiar clarity’. Whichever is textually correct (‘clarity’ seems to me more like Thomas) the difference shows forcefully and instructively the persistent and detailed attention needed to forge a poem, an attention which seems to have shaped Thomas’s work as a whole.

Newcomers to Thomas might best start with any volume of his collected poems, but Uncollected Poems is a well-edited and delightful, as well as valuable, coda to Thomas’s extraordinary output of, indeed, poetry.

I Told My Soul to Sing: Finding God with Emily Dickinson

Daniel Berrigan SJ: Going back to the poetry