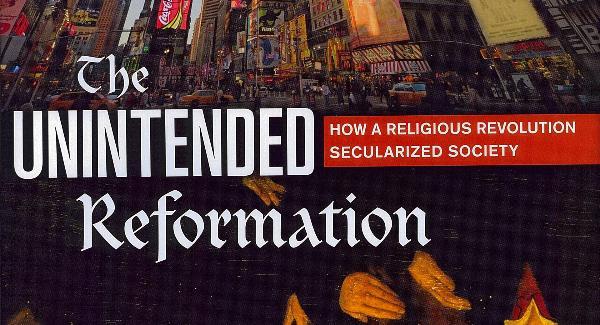 Time magazine’s ‘Is God Dead?’ issue of 8 April 1966 shocked me. It was not the message – any undergraduate could discuss Nietzsche’s madman’s proclamation that we had killed God – but the medium. Time articulated the views of the educated middle-class, read by the man on the Clapham omnibus and by the woman in the pew. That they would even consider the question, especially, if I may place the issue within Roman Catholicism, during Vatican II exhilaration, was indeed noteworthy.

During the subsequent forty years, Christendom morphed into post-Christian (Western) Europe. Politicians denied any connection between Christianity and the new millennium. Signs on London buses announced ‘There’s probably no God. Now stop worrying and enjoy your life’ as if theism were life’s sole irritant. The Oxford philosopher, Richard Dawkins, a major backer of the Atheist Bus Campaign, characterised theists as delusional and dismissed the God hypothesis in his bestseller, The God Delusion (2006). The late journalist Christopher Hitchens asserted, as expressed in the subtitle of the American edition of his attack, God is not Great (2007) that ‘religion poisons everything.’ Cambridge physicist and mathematician Stephen Hawking dismissed God, or at least his God-of-the-gaps, as unnecessary in A Brief History of Time (1988). There have of course been counter-arguments, for example Roman Catholic theologian John F. Haught’s reply to the new atheists in God and the New Atheism: A Critical Response to Dawkins, [Sam] Harris and Hitchens (2008), but overall God has taken a beating. Reason apparently has finally completed the promise first displayed during the Enlightenment and dispelled the fading shadows of medieval faith. Some indeed now wonder whether any questions will remain if the ‘God particle’ has in fact been discovered. In bookstores, serious religious and theological works are currently stored cheek-by-jowl with books on astrology, tarot cards, New Age and neo-paganism. In today’s multicultural cafeteria, one may mix and match religious beliefs and moral principles to conform to one’s palate. The culture of ‘whatever’ has reduced claims to objective truth to subjective comfort. Chief Rabbi Jonathan Sacks, commenting on recent financial scandals and the prominence of a Gordon Gecko, ‘greed is good’ mentality, notes: ‘We are reaching the endgame of a failed experiment: society’s attempt to live without a shared moral code. The 1960s applied this to private life. The 1980s applied it to the market’.[1] But how can we regain a common code of ethics, especially in a society that has defined diversity as its fundamental guiding principle? ‘How did we get here from there?’ if I may paraphrase a Stephen Sondheim song from Merrily We Roll Along. The book under review provides an answer

Brad S. Gregory completed his doctorate in history at Princeton University in 1996. Currently he is the Dorothy G. Griffin Associate Professor of Early Modern European History at the University of Notre Dame. His doctoral thesis served as the basis for Salvation at Stake: Christian Martyrdom in Early Modern Europe (Cambridge, Mass.: Harvard University Press, 1999), a justly praised, comparative study of Protestant and Catholic martyrs with a distinct thesis. Repudiating contemporary, secular, ‘reductionist’ analyses of martyrdom, Gregory argued cogently for the re-introduction of religion: ‘The act of martyrdom makes no sense whatsoever unless we take religion seriously, on the terms of people who were willing to die for their convictions. When we do, the intelligibility of martyrdom hits us like a hammer’ (p. 350). Subsequently Gregory was more concerned with secularisation and its effect on the study of religion than martyrs and martyrologies. Shorter lectures and articles[2] explore the mentality behind the deplored reductionist approach to religious phenomena; this monograph sets the origins of this mentality in the Reformation itself, the religious phenomenon par excellence later vitiated by social, economic, cultural and gender historians.

Gregory cites William Faulkner’s insight that the past is never really past but continues to be alive. The past in this case is the Reformation: the ‘ideological and institutional shifts that occurred five or more centuries ago remain substantively necessary to an explanation of why the Western world today is as it is’ (p. 7). Beginning with the phenomenological observation of the modern Western spectrum of contradictory truth claims, the author seeks their origin. Six subsequent chapters focus on specific subjects: exclusion of God from the natural world; loss of objective truth; privatisation of religion; subjectification of morality; the ascendancy of consumerism; and the departmentalisation of knowledge. Each chapter traces trajectories from the Reformation Ursprung to the contemporary world and in so doing conducts the reader on a crash course on a history of philosophy, of theology, of economic theory, etc., each rooted in the author’s firm grasp and appreciation of Reformation history.

Gregory summarises the position of the above-cited ‘Neo-Atheists’ thus: ‘the findings of science either prescribe atheism as a matter of intellectual integrity or requite a schizophrenic separation of scientific findings from religious faith’ (p. 29). Faith then is about ‘ineffable feelings’ (p. 65). The multiplicity of religious options demonstrates religion’s subjective character. One generally practises (or lapses from) the religion in which one was born and raised, but does that commitment mean that one’s acceptance of the truth claims of that religion to life’s serious questions suggests the invalidity of rival truth claims? Certainly it should. The fundamental Protestant principle sola Scriptura demanded that Scripture alone be the criterion in the formulation of true answers to the ‘Life Questions.’ Ironically the principle, intended to galvanize Christians around their book, resulted in the proliferation of Protestant confessions as they disagreed over the interpretation of Scripture. Appeals to private revelation and reason failed to halt the centrifugal motion. The result: ‘in principle truth is whatever is true to you, values are whatever you value, priorities whatever you prioritize, and what you should live for is whatever you decide you should live for. In short: whatever’ (p. 77).

Religious hostilities have, for the most part, ceased in the Western world. The destruction and death during the different religious wars that followed the breakdown of Christendom ended with a general, at times reluctant, acceptance of toleration and religious liberty. But there was a price for the separation of Church and State, the transition from the defender of the faith to defender of the faiths: religion’s gradual separation from other aspects of society. Gregory comments on the unintended current state of the United States: ‘freedom of religion protected society from religion and so has secularized society and religion’ [italics Gregory’s]. Protected by appeals to individual conscience with legal guarantees of religious freedom, Americans can believe whatever they wish as long as they obey the law. The age of entitlement was born.

Similarly, moral values have devolved into subjective, personal preferences. As with religious beliefs, one may hold whatever moral values one feels good about as long as one observes the law. Inevitably Western civilisation embarked on a path that resulted in the de facto identification of morality and law. Roman Catholic insistence that morality be grounded in natural law and/or metaphysical anthropology results in frequent clashes with contemporary culture. Gregory blames the ongoing disputes between Catholics and mainline (magisterial) Protestants and the consequent religious wars for the eventual distinction between the public and private spheres. Laws defined public behaviour but left unregulated private behaviour. But here too, as with religion, we are left with a question regarding the definer of the public and the private. Who decides what is God’s and what is Caesar’s? If each prepared a reply, how they would differ!

With the secularisation of society and especially the subjectification of ‘Life Questions,’ knowledge as pursued at research universities became more specialised and barren – scientific in a negative sense. One is reminded here of Chief Rabbi Sacks’s comment: ‘Science takes things apart to see how they work; religion puts things together to see what they mean’.[3] More damning is Gregory’s contention (as witnessed by the authors mentioned in the second paragraph of this review) that there is a general derision of ‘any firmly held religious belief’ (p. 356) in academia. The secular mission of (principally American) universities demands that they ‘instill enough skepticism to divest students of any substantive truth claims – especially religious ones – that could disrupt the demands of the most important social virtue, namely open-ended toleration’ (p. 359). Protestant reformers opened Pandora’s Box in their attempt to strengthen and deepen Christian life and doctrine. Instead they launched the trajectory that produced the secular ‘Kingdom of Whatever’: the unintended reformation.

Many readers will note that some ‘World We Have Lost’ sentiments seem to lurk behind Gregory’s arguments, but the author argues against mere nostalgia. For him the post-modern world is failing due to its failure to provide sufficient answers to the Life Questions. Said questions remain essential and must be re-addressed. Contemporary society speaks of rights, but can contemporary science discover them in the material substance scrutinised by the finest microscopes? Rights take for granted a natural law, a philosophical anthropology, a creature created in the image and likeness of God: the academy must be unsecularised.

The Unintended Reformation demands much from the reader. Through circa 400 pages of text and 150 more of endnotes, the author leads us through a maze of critical positions. Unfortunately the publisher’s decision to publish endnotes instead of footnotes and to omit a bibliography hinders our progress as we seek the sources of information. The author writes with passion, but not always with clarity. Occasionally the prose runs away from him as sentences and paragraphs seem endless. But is Gregory’s argument convincing? A glance at the many reviews posted on amazon.com reveals the book’s impact. The majority are favourable; some suggest that the Ursprung is a moveable point and could just as easily be placed in the Middle Ages or the Enlightenment. Perhaps. Some commentators claim they have read the book two or three times. If you are worried about the current state of society and interested in understanding it, I recommend you read it at least once perhaps in the context of a course or discussion group, so the issues raised can be pondered and debated.

The reviewer, Thomas M. McCoog SJ is the Archivist of the British Province of the Society of Jesus.