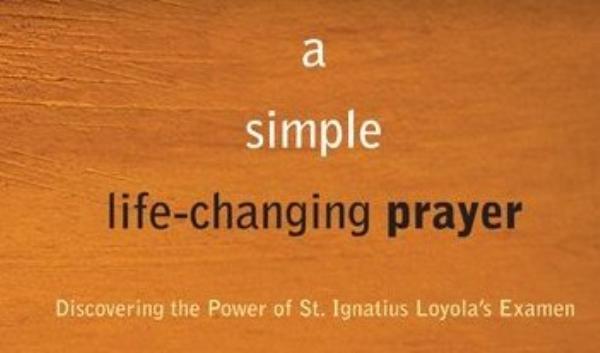 Jim Manney, a senior editor for Loyola Press, makes a very good case for the Examen being the ‘simple, life-changing prayer’ he claims it to be in this book’s title. His small (85 page) guide to Ignatius’ Examen is particularly welcome because any cursory search on the web will reveal a bewildering variety of approaches to Ignatian spirituality in general and to the Examen in particular.

Manney looks at both the origins of the Examen and a key modern interpretation of it. He describes how, by faithfully following this way of praying, he has been helped to find God’s presence in everyday life. He explains how he discovered that the Examen,

...looked to a God who was near me, present in my world, active in my life. It told me to approach prayer with gratitude not guilt. It helped me to find God in my life as I lived it, not in some heavenly realm beyond time. The Examen had me take myself seriously, as I was, not as I wished I was...

That God is so very near to us and that there is no gap between the sacred and the secular, must be very good news for all of us who struggle to find just that connection.

The book is written in a very accessible way and its chapters are structured to reinforce the five steps of the Examen:

Put this way the method may sound pretty simplistic and even banal, but Manney is very honest about the effort involved in prayer of this kind and the challenges it poses. The real strength of this book lies in the experiential account that the author gives of his own induction into this process. He is honest about the problems – for instance, about the initial strangeness and perhaps sense of artificiality of such a highly structured approach; about the danger of the exercise becoming a one-person, self-centred show; about the difficulty of believing that God really can be found in the mundane, everyday stuff of life, about the discipline required to stick to a regular time of prayer and about the boredom in the stretches when nothing seems to be happening. In contrast, he examines the power of the prayer to change behaviour over time, with ‘hands-on’ illustrations from his own life (and comments from his family – the acid test!). This often makes for uncomfortable reading, because so much of what he says about himself will resonate (at least, it did for me) and can strike a little too close to home.

While Manney readily admits that the Examen is not the only way to pray, he suggests that it is a way in which everyone can pray and that it has a number of particular strengths:

- it banishes the abstract and relishes the concrete: it treats every moment of the day as a blessed time when God can appear and is a way to find God in all things;

- we know exactly what to pray about: everything that has happened to us today;

- it challenges the illusion that we are in control of our lives: we pray the Examen in the realisation that God has given us everything;

- although we will identify sin and wrongdoing in ourselves, the context in which we do this is totally positive: gratitude to God for the blessings of our lives;

- we review our day in the loving light of Christ precisely to strip away facades and correct illusions – what Walter Burghardt SJ terms ‘a long, loving look at the real’[1];

- it allows our feelings to surface, and gives us an opportunity to get acquainted with them/address them in prayerful openness to God.

What I found particularly helpful, having no background in either Ignatian history or scholarship, is the way in which Manney explains how the practice of the Examen originated and developed, and in particular how it has been adapted for use over the last forty years. Ignatius, we are reminded, advised his companions that when they were pressed for time by their apostolic duties, this was the one prayer that they must commit to, twice daily. The five steps of the exercise of the Examen, as Ignatius sets them out in the Spiritual Exercises [2], specifically refer to an Examen (literally a ‘weighing’ or ‘balance’) of conscience – focusing on particular sins or defects, in terms of thoughts, words and deeds. And the emphasis is on amendment: now you have identified this failing, how will you change? Catholics whose formative years preceded Vatican II will recognise the very systematic and categorical approach.

The insight of George Aschenbrenner SJ[3] in the 1970s was to link this process to the related, but separate Ignatian practice of ‘discernment of spirits’.[4] Here Ignatius demonstrates a strikingly modern understanding of psychology – of consciousness– and sets out to describe how our feelings and emotions have spiritual meaning.

When examen is related to discernment, it becomes examen of consciousness rather than conscience. Examen of conscience has narrow moralistic overtones. Its prime concern was the good or bad actions we had done each day. Whereas in discernment the prime concern is not with the morality of good or bad actions; rather the concern is with the way God is affecting and moving us (often quite spontaneously!) deep in our own affective consciousness. What is happening in our consciousness is prior to and more important than our actions, which can be delineated as juridically good or evil...

... in this sense examen is a daily renewal and growth in our spiritual identity as unique flesh-spirit persons loved and called by God in the inner intimacy of our affective world. It is not possible for us to make an examen without confronting our own unique identity in imitation of Christ before God.

It fascinates me to situate this interpretation in the contemporary secular context. Aschenbrenner’s insight comes a decade after Michael Polanyi said memorably, ‘we know more than we can tell’[5], and a decade before Donald Schön developed the idea of how we can become aware of and continuously reflect upon this ‘tacit knowledge’ in our lives, as it affects all areas of our personal and professional development[6]. I think the meeting between Christian and secular traditions of reflection would have appealed to Ignatius, master of the art of crossing the gap. The practice of the Examen corroborates (as Manney argues) the relevance of the Ignatian tradition to our lives in the world – to our relationships and homes and places of work. And it suggests too its adaptability and the opportunities available. If the Examen is such a powerful means to our human development then, for instance, how may it be made more widely available within places of education and formation, including (as someone suggested to me recently) in our Catholic schools?

Of course, for all its relevance and contemporary appeal, this technique is not new in the history of prayer. Attentive regard to the subtle promptings of the Spirit is classically illustrated in the experience of Elijah, who found the voice of God not in the wind or the earthquake or the fire, but as a whisper within a gentle breeze. And the Desert Fathers and Mothers followed in Elijah’s footsteps: within their daily practice of work and prayer they cultivated an attentive silence, and it was here that they heard the voice of God and learnt to recognise their angels and their demons. And so Abba Moses counsels: ‘Go and sit in your cell, and your cell will teach you everything’.[7]

My one difficulty with Manney’s book is his polarisation of ‘action’ and ‘contemplation’, and in particular his identification of deeds with ‘action’ and words with ‘contemplation’: he comments, ‘Ignatius brought contemplation and action together, but the senior partner in the alliance is action’. However, when Ignatius says, ‘love ought to show itself in deeds rather than words’, what this suggests to me is the difference between what we actually do and what we aspire to do or talk about doing but never get around to. And this applies as much to our neglected contemplation as to our neglected action. Manney’s conclusion is that action is the ‘big sister’ to contemplation, but it seems to me that everything about Ignatius’ approach – working outward from thoughts and feelings to action – suggests the opposite: that the inner life is the prerequisite and foundation for the outer, or as Saint-Exupéry said, ‘l’essentiel est invisible pour les yeux’ (‘what is essential is invisible to the eye’) [8]. Franz Jalics SJ also suggests,

Every work with others, be it pastoral care or voluntary work ... depends for its effectiveness more on your own transformation than on what you do. If we trust in grace we will prioritise in our preparations a quiet openness and remaining in the presence of God. We will experience how we become more receptive of grace –and better disposed to be instruments of grace – in God’s hands ... This only happens through self-emptying.[9]

But perhaps this is where different temperaments will diverge and have differing points of view.

This is overall a valuable and thoughtful book, and a very practical one, which can be put with confidence into the hands of anyone who wishes to learn to pray the Examen and to find the presence and action of God in their lives.

The reviewer, Andrea Kelly, is the Coordinator of London Jesuit Volunteers.

Find this book on the Loyola Press web site