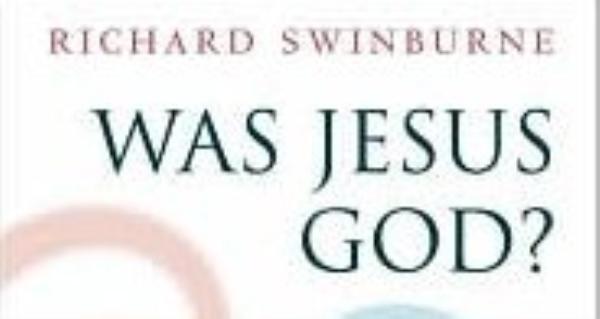 Richard Swinburne retired a few years ago from his post as Nolloth Professor of the Philosophy of the Christian Religion at Oxford University. He is very well known for his many works on the philosophy of religion – The Coherence of Theism, The Existence of God, and Faith and Reason – as well as on Miracles. He is an example of a fairly uncommon species, an analytic philosopher who is a committed Christian believer, whose writings offer a well-rounded rational defence of theism, in a style which is technical without being too daunting.

In Was Jesus God? Swinburne turns his attention from theism in general to the specific claims of Christianity about the life, death, resurrection and divinity of Jesus. The style and approach is all of a piece with his earlier works – careful, somewhat dry, easy to follow, extremely tightly argued. While he assents to the central tenets of Christian belief – Jesus is Divine, was a revelation of God, atoned for our sins, rose from the dead –he does not venture to say that there are no two ways about it.  He is well aware that there are many difficulties in establishing any one of these claims, let alone all of them, beyond any reasonable doubt. What he hopes to show is that each of these Christian beliefs is rationally defensible in philosophical, theological, and historical terms. A serious case can be made, which it is at least not easy to overturn, that the central beliefs of Christianity are very probably true.

Where the book succeeds is in setting out a way of connecting all of these various beliefs. Swinburne undertakes to show that it is reasonable to argue that God is loving, that he would reveal himself to us his creatures, that he would respond to our sins by making atonement for them. He then considers what might be involved in being both a human being and God; what could Jesus have known? How much of his divine knowledge was available to him in his earthly life and how much of it would he have used? What powers did he have, and what, if any, were his limitations?  He sets out to establish why it is reasonable for us to conclude that Jesus did rise from the dead, since this is the best explanation of the behaviour of the early disciples. And he integrates all of this into a contemporary account of what it is to say that the books of the Bible are inspired and that what they teach is true.

That project is massive indeed, and entire libraries have been devoted to almost every single one of the themes that Swinburne discusses. I felt that the extreme condensation of such a vast array of issues into one very short book was in some ways helpful, in others disappointing. It is helpful to see how a well-informed and highly intelligent writer fits them all together, and the kinds of arguments he considers useful at each point of his discussion. Swinburne is acquainted not merely with the philosophical arguments involved at every stage, but also with the theological discussions of the early Christian Church and with contemporary issues in biblical exegesis. If you want a quick, coherent and clear overview, Swinburne is your man. However, at each stage I found myself wishing that more time had been taken to consider legitimate Christian alternatives to the interpretations of Christian beliefs that Swinburne takes for granted. His view of the incarnation, for example, goes a long way towards saying that Jesus was divine and that his human nature was merely a tool to accomplish his mission of revelation and salvation – rather than starting from the knowledge that Jesus was human in all things but sin, as the disciples did, only gradually concluding (after a very considerable time) that he was God. Again, that God more reasonably chose to atone for our sins rather than, as Abelard argued, simply to forgive them is indeed one very traditional position; but I would have liked to see the alternatives taken somewhat more seriously. Swinburne, while well aware of the different literary genres contained in the Bible, seems to take a rather literalist view of the resurrection narratives without much examination of equally possible, and equally theologically valuable alternatives. It is one thing to say that it is a fact that Jesus rose from the dead and that this was central to the beliefs of the early Christians, as St Paul makes clear; it is quite another to say that the resurrection narratives give historical descriptions of how this in fact took place.

The result is that the book as a whole comes across almost as an old-fashioned work of Christian apologetics expressed in the language of analytical philosophy – appealing to probability, rationality and historical good sense. Swinburne rightly avoids any version of the view that Christian belief in the divinity of Jesus amounts simply to saying that the teachings of Jesus are of enduring value, or that the resurrection consists in the continuing power of Jesus to inspire and guide us. But the alternatives available to fully orthodox Christians are rather broader than he gives us to understand. I might have liked to read a defence which would have helped to initiate his readers into the live issues in contemporary theology rather more than he does. This book is a very useful start, but certainly not the last word.

The reviewer, Gerard J Hughes SJ, was head of the philosophy department at Heythrop College, University of London, and is currently tutor in philosophy at Campion Hall, Oxford. He is the author of Aristotle on Ethics (Routledge, 2001) and Is God to Blame? (Veritas, 2007).

Find this book on the Oxford University Press web site

Mark of an Angel

What has the EU done for... France?