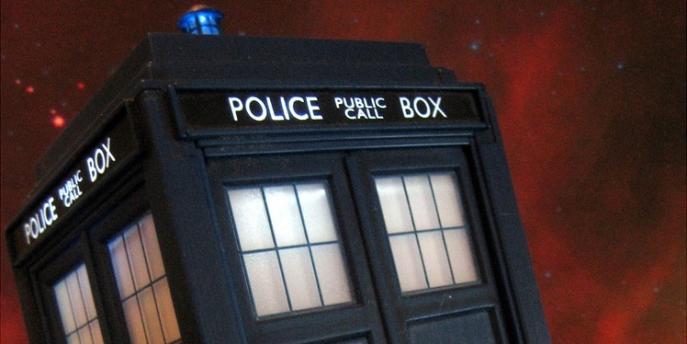 Doctor Who is back on the BBC this weekend as the Time Lord returns in the form of Peter Capaldi.  Jonathan Lomas celebrates the beginning of the new series by giving us a guided tour of the Tardis, ‘a box of tricks which has become not only a symbol of the justice the Doctor seeks to dispense, but may also allude to the figure of the healer- knight who seeks to help a wounded world.’

Who is Doctor Who? The grumpy old man who kidnapped two school teachers in the show’s first ever episode in 1963? The action hero saving the world in the early 70s? The bohemian alien played by Tom Baker, the role’s longest incumbent, from 1974-81? The dark clown presented by Sylvester McCoy when the show was axed in 1989? Christopher Eccleston’s war-damaged Time Lord who returned triumphantly to our screens in 2005? Or might it even be Peter Capaldi, who takes over as the Twelfth Doctor this summer?

Or does he? Like all good myths, so much of the programme’s history is open to dispute. Fans of the show were surprised to see John Hurt playing a thirteenth incarnation of the Doctor during the 50th anniversary episode in November 2013, an episode which set a Guinness World record for a drama programme by being broadcast in 94 countries simultaneously – if that’s not popular culture, I’m not sure what is. Older readers may recall ‘Hammer Horror’ star Peter Cushing having two big-screen outings as the Doctor, and some people even add the names of Richard E. Grant and Rowan Atkinson to the list of actors who have played the Doctors Who.

There has been only one contender for a ‘constant’ over the 800 episodes of the show, and that’s the Tardis, though it has disappeared for a few episodes here and there. Not only is a huge part of the show’s legacy, its resonance in wider culture is such that I feel confident in assuming that most people are picturing a blue police box in their mind’s eye. Given the place of ‘tardis’ in common parlance, it is strange to think that no such word existed in the OED before 1963, when Australian Catholic Anthony Coburn coined it after being inspired by one of the two police boxes which once stood on Wimbledon Common. It’s an acronym of Time And Relative Dimensions In Space – although as ever there is some dispute amongst die-hard fans over whether it should be ‘dimension’ or ‘dimensions’ …

The police box is the guise that the Doctor’s ship took on when he visited London in 1963. The original idea was that the ship would be able to find other suitable forms of camouflage when visiting times past or alien planets, but the sheer expense of the original Tardis prop meant that the writers left it as a police box. (It does, however, briefly change shape in 1985’s ‘Attack of the Cybermen’ and is even painted pink in 1988’s ‘The Happiness Patrol’.) As other Time Lord characters were introduced into the show in the 70s and 80s, we have seen their Tardises adopt the guises of horseboxes, Doric columns and grandfather clocks.

It is the ultimate story-telling device: a means of having your hero arrive quite literally anytime or anywhere – from 100,000 BC, the setting of the first ever episode, to a town called Christmas in a distant galaxy in the 2013 Christmas special. Yet this narrative device does of course create problems of its own and so a whole host of reasons have to be invented for why our hero cannot just go back in time and correct earlier mistakes. The first episodes used the loss of the Tardis itself to place its crew in jeopardy, whereas later stories used it as a vehicle to insert the Doctor at key moments in a planet’s history. During the Jon Pertwee era, the character was even denied its use and exiled to earth, whereas in more recent episodes (‘The Big Bang’, 2010) it’s become a deus ex machina to save the universe.

The police box used in the programme follows a 1929 design for the Metropolitan Police by Gilbert Mackenzie Trench.  Once a familiar sight on British streets, few people would have imagined that they had the capacity to travel in time and space, or that they were so much bigger on the inside; the 1978 episode ‘The Invasion of Time’ features the Tardis swimming pool, whereas the 2012 episode ‘Journey to the Centre of the Tardis’ also shows off its library. But most of the television episodes featuring the interior of the Tardis simply depict a large control room, usually styled according to how the designers from each era of the show understood the term ‘futuristic’. By the time of the show’s return from cancellation in 2005, the interior had become even more organic and the idea that the craft itself was a sentient being was explored further in the 2011 episode ‘The Doctor’s Wife’, the briefly incarnate Tardis becoming the titular partner.

So what does the Tardis tell us about this modern day folk hero? If King Arthur’s Camelot perhaps represented a longing for order and security in Medieval England, and if 19th Century writers like Sir Walter Scott might have seen Robin Hood’s Greenwood as symbolising a vanished Merrie England, what might this blue box suggest about the Doctor?

Well, it is a police box, and that links us to the perennial quest for justice in folk stories and even in their modern day off-shoot of detective fiction. In 1963, the British police were regarded as being above suspicion by the British public; the long running BBC series Dixon of Dock Green (1955-1976) presented the boys in blue as models of fair play and probity, essential characteristics in the myth of British identity. Having the initially querulous character of the Doctor travelling in a police box would have reassured children of his role as one of the good guys, which was not always evident in his early adventures.

The British police are also routinely unarmed. It was in fact the shocking death of the fictional PC George Dixon at the hands of armed crooks in the film The Blue Lamp (1950) which led to his character being resurrected for the eponymous TV series.  And according to popular belief, the Doctor never carries a gun; he is a figure, like Sherlock Holmes, who uses his wits and superior intellect to get him out of trouble; though, like Holmes, the Doctor is armed on more occasions than many people realise and often has a Watson standing by with the requisite weaponry.

There, though, the parallel with the police ends, as ultimately they are servants of the Establishment whereas, like Holmes, the Doctor is essentially on the outside: both investigate on their own terms and are often reluctant to solve puzzles that don’t intrigue them. And, like King Arthur and Robin Hood, there are even questions about the Doctor’s legitimacy. The very Tardis he travels in has been stolen from his own people and his is the life of the wanderer. In the revived series (2005- ), this life has become a search for a homeland he believes was destroyed. He is a rebel who may decide to help the authorities on his terms, or to hinder them if he feels he has a better solution.

Aside from pointing to the Doctor’s role as some kind of policeman, the Tardis has at times borne The Cross of the Knights of St John on its doors – from 1963 to 1966, and from 2010 onwards. Outwardly, this signified that the police box contained a first aid kit, but symbolically it also linked the Doctor to his roles as healer and warrior in the show’s history. The Doctor may often be characterised as a saviour of worlds, but with over 1700 on-screen deaths in the show’s first 800 episodes it’s been a fairly bloody process for a children’s show. He may become introspective over acts of violence, but seldom backs down from making tough decisions. He’s the healer who carries a sword in the other hand.

Although the Doctor has enjoyed a range of female admirers, the prudes at the BBC wouldn’t let him travel alone in the Tardis with a woman he wasn’t related to until 1971’s ‘Colony in Space’. Even with the more liberal storylines of today he still shares Holmes’s trait of being seemingly indifferent to most women. He’s had one or two Irene Adlers in his life, but a man who seemingly cannot grow old cannot afford to fall in love and watch his loved ones die. Even his marriage in 2011’s ‘The Wedding of River Song’ was more of a plot device than a sign of lifelong commitment. The Tardis may be his home, but at the end of the day it’s a transient one and carries him just as often away from the friends who love him. Holmes and the Doctor, at the end of the day, remain as outsiders to family life.

Ultimately it is only the Tardis that endures. Each incarnation of the Doctor will eventually give in to chronological time, whereas his ship seems to exist in Kairic time.  From its humble beginnings to being filmed in 3D for the 50th anniversary, it has become the one, fairly reliable, constant in the long-running series: a box of tricks which has become not only a symbol of the justice the Doctor seeks to dispense, but may also allude to the figure of the healer- knight who seeks to help a wounded world.

There’s just one more thing to say about our hero’s blue box and for that I must take you back to Friday 22 November 1963, a day before the first episode of the BBC’s new children’s serial is broadcast. Over in Dallas, John F. Kennedy is assassinated. News of the death of America’s only ever Catholic president of course overshadows the new serial. The producers of the show were so worried that they manage to persuade the BBC to allow them a rare repeat of their programme. But Kennedy’s death also overshadowed the deaths of Aldous Huxley and C.S. Lewis who also died that day. Both writers had experimented with science-fiction and fantasy, and surely the makers of Doctor Who must have had some debt to the latter, whose 1950s children’s book The Lion, The Witch and The Wardrobe took an ordinary, everyday object and made it a portal to another world.  I like to think that debt was in part repaid with the 2011 Christmas special – ‘The Doctor, The Widow and The Wardrobe’.

Wherever that magical blue box takes its next incumbent, Peter Capaldi, and whether or not you count him as the 12th, 13th or 27th Doctor Who, I hope that the alien hero of this quintessentially British show continues to entertain audiences old and new this year. And yet, however marvellous the special effects might be, or however clever the scripts, I doubt there’ll ever be anything as magical as that moment in 1963 when two school teachers discover an ordinary blue police box is bigger on the inside.

Jonathan P. Lomas is the author of Whodunnit, a murder mystery set in the world of Doctor Who fandom.

Jesus: Who Do You Think You Are? 4. Jechoniah