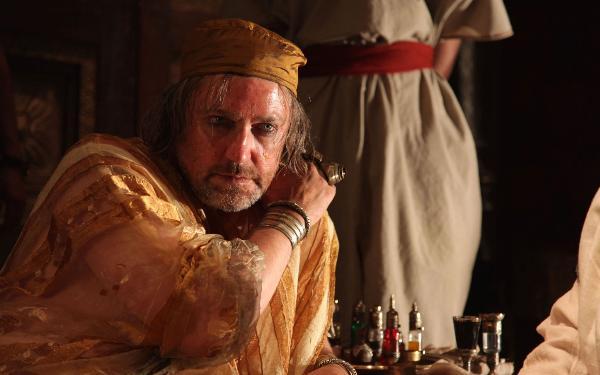 As the BBC’s dramatisation of The Nativity continues, Andrew Dickson finds clear reflections of biblical theology as the stories of the Magi and of a poor shepherd develop. While Mary’s narrative diverges slightly from Catholic tradition in this second episode, this captivating series is shaping up to be a challenging but excellent interpretation of a familiar story.

The Nativity by Tony Jordan is re-telling the familiar story of the events leading up to the birth of Jesus from a thought-provoking angle. Whilst it follows for the most part the gospel accounts of Matthew and Luke, it explores the blossoming relationship between Mary and Joseph in a new way. The second instalment in the series maintains the high standards set by the opening episode: the cast is excellent; the production first rate. There is a good chemistry throughout between the actors, Andrew Buchan (Joseph) and Tatiana Maslany (Mary), helped no doubt by a well-written and at times very amusing script, as well as some stunning Moroccan scenery.

The second episode begins where the first left off: in the garden of Mary’s parents with Gabriel, played by John Lynch, giving Mary the startling news that she is to be the mother of God. The script keeps fairly close to the Lucan Gospel account – except for Mary’s response to Gabriel. Her answer is one that will not resonate with Catholics – ‘I don’t believe you! Go away.’ It may well be Tony Jordan’s attempt to bring the story into the 21st century in a way that is more ‘believable’ in a western society that is all too often centred on the self, but it strays too far from Luke’s version where Mary’s fiat, after she has asked how such a thing can be possible, is more immediate: ‘I am the handmaid of the Lord. Let what you have said be done to me.’ Mary’s purity, generosity, humility and openness to God is a model that inspires Christians and it would have been refreshing to see a brave statement being made at this juncture, showing these special qualities that Mary had. In this version Gabriel has to convince her; he asks her to look inside herself and feel the Holy Spirit. She does this and then senses the presence of God within her. When she tries to tell Joseph what has happened to her, he is too love-struck and excited to notice her anxiety.

The focus then shifts to Thomas the shepherd, played well by Al Weaver, whose sick wife’s condition is worsening. The tax collectors arrive and take away some of his livestock to pay his outstanding dues, leaving him angry and full of despair. Though this specific plot has no biblical foundation it is cleverly written, because we are left waiting to see how this shepherd fits into the whole nativity narrative. This story within a story draws on the Lucan leitmotif of Jesus coming into the world to save the lost, the outcasts, the sinners. It is the shepherds, the prostitutes, the simple working people who recognise ultimately that Jesus is the Messiah: the rich and powerful, those who have most to lose are those who both fear and refuse to believe. Elements of this theology run through this episode.

The Magi, portrayed by Peter Capaldi (Balthasar), Obi Abili (Gaspar), and a slightly wild looking Jack Shepherd (Melchior) come across as not only astrologers but also philosophers. We first see them discussing how they are going to travel to Bethlehem unnoticed, what passes they might need, whether they will be welcomed – a portrait of real wise men, politically and economically savvy. On their way to find the new King, whose arrival is predicted in the configuration of stars and planets that they have observed, there is a rather simplistic theological debate around the ultimate question: ‘Do you believe in God?’ There is no time to explore this in any real depth just yet, though we do have Melchior trying to introduce some rationale for the coming of this new King by using the analogy of the child who has lost its way and the Father who needs to intervene. This is drawing on the theology of the Old Testament, found in particular in the Book of Exodus, where Israel is treated as a naughty child that needs to be taught a lesson if it is to be God’s chosen people because it keeps breaking its promises. Ultimately God recognises that the world cannot save itself and needs help, a Messiah to lead them back to God forever.

The antitype to these three kings of course is Herod, who worries about his kingdom, his fear gnawing away at him at every opportunity. The script has him riling against Augustus who wants a census because he thinks Herod is cheating him out of taxes. This may not be historically accurate but it is entirely plausible that Herod, in his paranoia, would have suspected some ulterior motive. When he hears of the riders from the East his sweat glands go into overdrive and he sends scouts to first enquire of, then shadow and report back on the Magi. As we know, Herod engineered his assent to the throne by assassinating those in his path, usually his family, and he had an army of spies to alert him to any threat.

The Visitation scene begins with Mary travelling to Elizabeth on the back of a cart drawn by an enthusiastic donkey. What we hear from Elizabeth, played by Frances Barbour, is fairly close to the Old Testament prophecies from Isaiah, though there was little sense she was filled with the Holy Spirit. I have always thought of this encounter as being a joyful one but there was scant evidence of this in the scene. It was also difficult to recognise any of Mary’s magnificat which could have brought this section to a powerful conclusion. Instead we are left with a vulnerable and unsure Mary who, when she asks Elizabeth, ‘What if Joseph doesn’t believe me?’ is told, ‘That is a burden you must bear alone’.

The ending of the episode is a powerful one, with Joseph rushing to find Mary when he hears she has returned to Nazareth only to find her obviously pregnant. His world comes crashing down around him and, as with the first episode and typically of Jordan’s writing, you can almost hear the familiar Eastenders music in the background.

For those who are believers already, this account of the birth of Jesus will be seen as a welcome addition to the body of television and film re-enactments already in existence. For those who are still searching, I think they will judge this as a good story well acted, with an excellent script and stunning locations. Its primary purpose was no doubt to tell a familiar story from a new perspective and if it challenges us in its interpretation, and gets us to reflect again on our own traditions and beliefs then it has served its purpose.

As the modern day Theophilus we will learn, as Luke hopes, how well founded the teaching is that we have received.

Episode 2 of The Nativity was broadcast on Tuesday 21 December at 7pm on BBC One and is available on BBC iPlayer, along with Episode 1. The series continues on 22 and 23 December, also at 7pm on BBC One.

St Henry Morse SJ: ‘A saviour of life unto life’
Alfred Delp: committed to Christ
‘The Fight Between Carnival and Lent’
‘Give them something to eat’: The Christian approach to food aid
Ignatius and the Stars