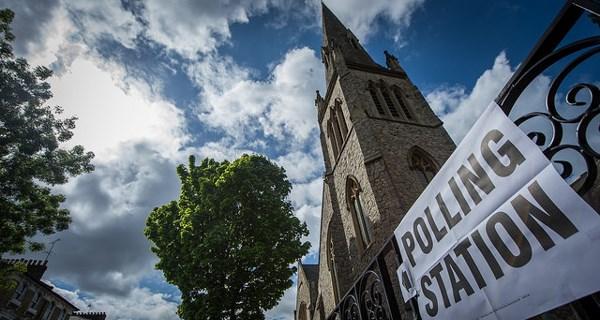 Next month, British voters will make another trip to the polling station to cast their ballots in a General Election. Deciding who deserves your vote is never an easy matter and many people are finding it more difficult than ever to decide which party’s path leads towards the common good, Nicholas King SJ included. He explains why a new book might be the perfect tool to help ‘people of goodwill’ decide how to cast their vote.

So they have called another election, and the reaction of British voters may suggest that they are meditating another shock for those in power. At the same time, some people are asking, with a hint of impatience, ‘What is the Church telling us about the election?’ This may be an unreasonable request; this time round, it seems very hard to get it right and, speaking personally, I can never remember being as undecided as I am for this election, although I am determined to cast my vote. Perhaps then, we should ask instead, ‘How does God want us to vote?’ That is of course not much easier, but it is possible intelligently to enquire, ‘What does the Bible have to say on the matter?’, on the grounds that God’s voice can be detected just below the surface of the text of the sacred page.

And if you think that is a tall order, then a book[i] has just appeared that you might read. It will not tell you where to place your X, but it may assist your reflection. By a providential coincidence it has come out in the run up to a General Election, although that was not part of our plan. The book is very short indeed, and designed to help thoughtful Christians to consider the ‘common good’ rather than the pursuit of the individual’s own selfish interests, which is an excellent idea during an election campaign and indeed at any time. It offers six short passages from the Bible, from Acts and Genesis, Amos and John, 1 Peter and the Book of Revelation, and with carefully selected questions it intends to prompt ‘reflection, discussion and action’. The texts are probably best used by groups rather than by individuals in solitary reflection; and they invite the reader to look at the ‘common good’, understood as the conditions necessary for everyone to thrive. Shrewd observers will see a profound similarity here to the principles of Catholic Social Teaching, which politicians of all persuasions are beginning to see as a way ahead.

Each text has a carefully chosen image, with which the reader might begin. Then the biblical passage can be read reflectively, leading into discussion (an hour or so is suggested as a good time) and then a closing prayer. We chose to start with Acts 2:42-47, Luke’s attractive summary which paints that memorable picture of the early Church, coming together from all backgrounds and yet guided by the Holy Spirit to share generously and look after each other. This was a new way of life, one for which our generation is perhaps crying out.

Then we thought that the story of the Tower of Babel might have a good deal to say in our multi-cultural society about the ‘common good’, which is sometimes attained despite our bad decisions and misguided choices; God is always at work to make things better, even when we pursue our own selfish interests. The trick for us is to see where the divine invitation is beckoning us, today.

After that we could hardly avoid using something from Amos, that robustly challenging prophet, who came from the South to wake up the Northerners to the call of God in a society that was alarmingly like our own.

Our fourth text was from the great prayer in Jesus’s Last Supper discourse, asking the Father for the gift of unity. As we prepare to make our electoral choices that will be a precious asset in feeling our way towards what God wants of us, challenging us to pay attention to the ‘invisible’ people in our community. Without that alertness to those who are on the margins of society we cannot claim to be listening to what God wants.

The next passage, from 1 Peter, invites a meditation on what it means to be ‘God’s people’. Peter picks up a line from Exodus 19, seeing Israel as the people whom, as a very special gift, God has made his own and rescued from slavery, turning them into: ‘chosen race, royal priesthood, holy nation, God’s own people…called out of darkness into God’s marvellous light’. It is the action of God in our community that leads us to work for the ‘common good’ and to show by the way we live that it is what we are after.

The final image is from Revelation, the invitation to, ‘fear God and give God glory’. Without that basic aim, all our political action will be threadbare. Our task is to build the kingdom that God has always had in mind, God making up for our selfish errors. For, in the end, our common good is nothing other than God; and working for it gives us a glimpse of what God’s kingdom might be like. That will involve legal processes that work justly for the poor; it will come down to the creation of social justice where there is none; it will mean looking after creation and giving economic opportunity to those who need it. It will be a matter of listening to those who are at the ‘bottom of the pile’, to hear what they desire and need. And as election day draws near, it will involve each of us discerning in all the noise, the venomous abuse of politicians by their opponents, the gentle whisper of God who has a plan for each of us, how to help build the kingdom.

It may be difficult to define, but once you have seen it, the vision is unmistakable. It will always involve creating the conditions in which every member of the community, especially the poorest, can flourish. It will involve asserting the equality and dignity of every human being. It will let relationships flourish through reconciliation where there is estrangement; it will involve the key principles of subsidiarity, solidarity and participation. It will remind us of our God-given duty of stewardship. And, finally, it will mean, ‘here comes everybody’. No one, in this new world that God is preparing for us, will be left behind. That means opting for the poor, the vulnerable and the marginalised, as a priority.

You might like to get hold of a copy of this book and reflect on how God is inviting you to exercise your democratic duty.

Calling People of Goodwill: The Bible and the Common Good is published by the Bible Society and is available for £3.99 from: biblesociety.org.uk/commongood

[i] Calling People of Good Will: The Bible and the Common Good (Bible Society, 2017) Jonathan Rowe and Nicholas King SJ.

Labour and the Common Good

The Orthodox Church and the Greek Crisis