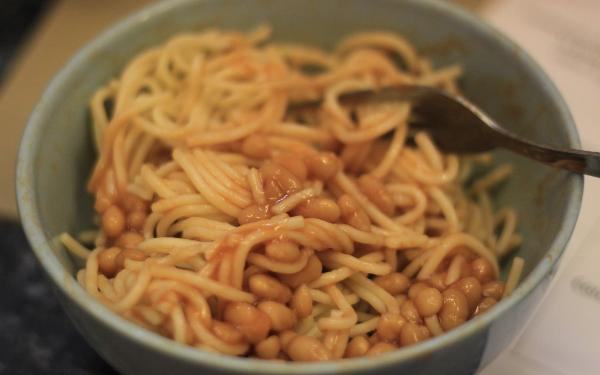 The ‘Live Below the Line’ initiative, supported by many UK charities including Progressio and Christian Aid, is inviting its participants to spend no more than £1 a day on food and drink for five days from 29 April to 3 May. James Potter set himself the same challenge last month. He tells Thinking Faith why he decided to engage with the problem of world hunger in this way, and describes his five days below the line.

The problem of hunger in the world is dauntingly huge. It is claimed that one eighth of the world’s population go hungry every day, despite our planet being more than capable of providing everyone with their fill. At the same time, statistics in the UK suggest that we throw away almost one third of our food. Something is terribly wrong here, yet the size of the problem can often scare us into doing nothing. In Ignatian terms, it is a sign of desolation to feel hopeless, to say, ‘there is nothing I can do, so I might as well sit back and concentrate on looking after myself’. At the same time, anger against these injustices, without being tempered by love, compassion and tenderness can burn itself out. So despite the sheer scale of the imbalances in our world, my faith moves my heart in compassion for others and calls me to do what I can to act against injustice.

I wanted to respond to the challenge of world hunger by doing something that would contribute to a well-thought out, sustainable plan of action. So I decided to take up the challenge to live on £1 a day of food and drink for five days – to make myself uncomfortable, to give myself something to reflect on and to raise awareness of the problem of hunger. I went out with a £5 note at the beginning of the week to buy absolutely everything that would pass my lips for the next five days, with the exception of tap water. I was able to buy: 5 bananas, 1 loaf of bread, 1kg of spaghetti, 1kg of rice, 1 bag of frozen mixed vegetables, 1 can of baked beans, 1 can of chopped tomatoes, 1 can of chicken soup, 1 jar of sweet and sour sauce and 6 eggs. That was it. I had spent (though I wasn’t sure how well) £4.97 - and I had no salt, pepper, spices, oil, butter or coffee. No coffee!!

The first day was a shock to the system: dry toast; spaghetti with a third of a tin of chopped tomatoes – barely enough to coat the pasta – and some disappointing mixed veg (though I suppose I shouldn’t have expected any more for the price I paid); and rice with chicken soup and more mixed veg, which again turned out to be a watery, flavourless disappointment. The one saving grace was the banana. Certainly the quantity of food was less than normal, but it was the lack of flavour, the dryness and only being able to drink water that was most difficult to cope with. My wife drew my attention to a concerning thought: it was one thing to put myself through this, but quite another to imagine having to feed what you knew was a substandard diet to someone you loved – in my case my 20-month-old daughter or pregnant wife.

By day 2 I had realised that I probably was not going to be hugely hungry, but I was going to struggle to force myself to eat the food and it was going to be dreadfully repetitive. I also began to realise how insignificant my challenge was. I became acutely aware of all the other luxuries I had around me: an abundance of clean water, sanitation, my warm house, my comfortable bed. I realised I could either succumb to the temptation of milking the ‘poor me – what an heroic thing I am doing’ attitude; or I could use this tiny experience I was having to fuel my reflection on the problem and my compassion for those who could only dream of living as I was for the week, and try to make these reflections the focus of my conversations.

Day 3 brought some surprisingly good food, as I picked up a few ideas about how to make the most of my ingredients; but it also brought a sense of disappointment that I was now finding the experience easier, having somewhat grown accustomed to the repetitive and tasteless diet. However, I had a rude awakening on day 4 when I calculated exactly what my nutritional intake was and, out of interest, contacted a friend who is a dietician. I was taken aback to hear that if I kept up such a diet for a sustained period of time, my body would eat up my muscles to meet the deficit in calories that was building up, which in turn would put strain on my kidneys. I would also suffer headaches due to lack of carbohydrates and would have to be careful about how I reintroduced nutrients into my diet.

I began to feel the effects of the previous four days when I reached the final hurdle of day 5. The strain was partly psychological, knowing the end was near but yet so far, and that at the end of a long, tiring week of work I would have to drink tap water at the pub and then go home to yet another bowl of rice and veg. I also began to feel some of the physical effects, feeling rather wobbly and slightly sick towards the end of the day, and with the cautions of my dietician friend on my mind I was extremely glad to be finishing the process. However, the pub was actually very enjoyable and reminded me that although we have so much stuff, so many luxuries, these often obscure the real riches of our life: our friends, relationships, laughter, beauty. This provided an important reminder not to patronise the poor: though they suffer the burden of unimaginably great injustice, it does not necessarily mean that they have nothing, or that we have everything.

I finished the week with a sense of how little of an experience of genuine hunger I had touched, which was truly humbling. But I was also aware of how much the challenge had given me: I had felt such compassion for those who have less than what is barely essential for life; I had reflected continually on what I normally take for granted; and, hopefully, I had created through conversation an awareness and a spark of concern in others. I tried throughout my challenge to make people aware of the many terrific initiatives which provide a platform for those who feel moved to do so to respond to the challenge of global hunger – for example Mary’s Meals, CAFOD’s ‘Hungry for Change’ campaign and the ‘Enough food for everyone IF’ campaign.

Mary’s Meals’ response is simple without being naïve: they provide a child with a meal a day in a place of education. In so doing, they are meeting the immediate need of the hungry child, but also helping to get children into schools rather than being out working to earn for their food. In addition, they source the raw ingredients for the food from local smallholder farmers, boosting the trade for the poorest farmers and engaging local volunteers to ensure that the people they are helping are seen as partners in forging a sustainable way out of poverty. This is an important contribution to the fight against hunger. CAFOD’s ‘Hungry for Change’ and the multi-charity ‘IF’ campaigns highlight some of the other important steps that need to be taken:

· The need for rich, developed countries to provide a decent level of aid. It is a myth that aid does not work and that it is an old-fashioned approach, though it is certainly short-sighted to be content with that alone. Very recently, the UK became the first of the G8 nations to come good on a promise made over 40 years ago of providing 0.7% aid, which is a major achievement.

· The need for fair trading practices and for just, sustainable governance of land usage which prioritises the provision of life’s essentials rather than wealth generation for the richest.

· The need for transparency in the way governments and others organise the food system, in order to expose actions and decisions that perpetuate the poor being kept in poverty.

· The need to clamp down on big companies dodging tax, getting rich at the expense of the poorest.

Such campaigns provide a way for all of us to engage with the problem of world hunger, even if it is only in a small way. I had the saying of Mother Teresa in my ears throughout the week of my challenge: ‘If you can’t feed a hundred people, then feed just one’. Maybe someone inspired by my challenge will go on to take part in it themselves, or to do far more; but my biggest hope is that many people will allow their faith to stir their hearts and will be prompted to make small, simple adjustments to their lives, all of which can make a difference.

Live Below the Line