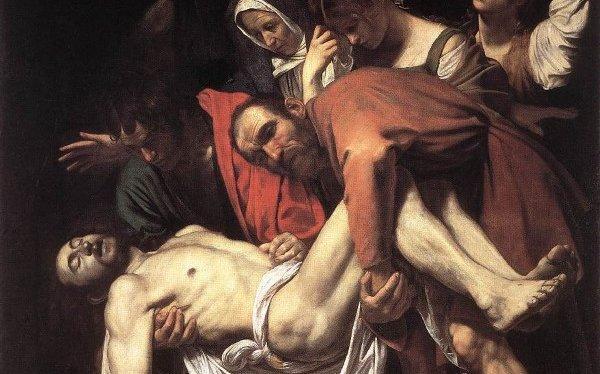 Nicholas King SJ’s Stations of the Cross conclude today. As we prepare to enter the Triduum, we observe and pray the eleventh, twelfth, thirteenth and fourteenth Stations.

Eleventh Station: Jesus is nailed to the cross

Then the governor’s soldiers took Jesus into the Praetorium; and they gathered the whole cohort round him. They undressed him and put a scarlet cloak on him; and they plaited a crown made of thorns and put it on his head, and a reed in his right hand. Then they genuflected before him and had fun with him, saying ‘Hail – King of the Jews!’, and they spat on him, and took the reed and beat him on his head. And when they’d had their fun with him, they took the scarlet cloak off him, and took him out to crucify him.

As they went out, they found a Cyrenean man called Simon; and they conscripted this fellow to carry his cross.

And they came to a place called Golgotha, which means ‘Skull Place’. They gave him a drink of wine mixed with gall. When he tasted it, he refused to drink it. They crucified him, ‘dividing his garments’, and ‘casting lots’. And they sat down and kept watch on him there. And above his head, they put the indictment against him:

‘This is Jesus, the King of the Jews’

Then two bandits were crucified with him, one on the right and one on the left. The passers-by abused him, and shook their heads, and said, ‘You are [the one] who destroys the Temple and rebuilds it in three days – save yourself, if you are Son of God, and come down from the cross!’

Similarly the Chief Priests had fun with the scribes and elders and said, ‘he saved others – he can’t save himself! He’s the King of Israel; let him come down from the cross now, and we’ll believe in him. “He trusted in God; let [God] deliver him now, if he wants him”. Because he said, “I am Son of God”.’

Similarly the bandits who had been crucified with him reviled him. (Matthew 27:33-44)

We have seen much of this material before, though not in Matthew’s version. It is worth going over it all again, watching Jesus at this last, and (literally) crucial moment. See once more the soldiers’ mockery. It is true that the laugh was on them, because for Christians really is our King; but what did it feel like for Jesus, as they dress him up in royal clothes and give him an imitation crown (but with thorns) and an imitation sceptre (but it was a breakable reed), and played games as though he were a real king, spitting and genuflecting and hitting him with his own sceptre. Then there is the grim arrival at ‘Skull Place’; and in Matthew the drink that he is given is poison rather than anaesthetic. And they watch, which somehow increases the indignity.

Then there is more mockery: from the indictment above his head (because he is not really ‘King’ – or is he?), from the passers-by, from the Chief Priests, scribes and elders (who just might be hoping that, even now, he might come down from the cross), and even from those who are in the same situation, who might have been expected to have some more fellow-feeling.

What does Jesus say, in response to all this mockery, this nailing to the cross?

Can you identify with Jesus in this situation?

Do you know of other people who have been treated in this way? How did they cope?

And when it came to the sixth hour, darkness came on the whole land until the ninth hour. And at the ninth hour Jesus shouted in a loud voice, ‘Eloi, eloi, lema sabachtani?’ which when it is translated is, ‘My God, my God, for what purpose did you abandon me?’ And some of the bystanders hearing [this] started to say, ‘Look – he is calling on Elijah.’ And someone ran and filled a sponge with vinegar and put it round a stick and gave it to him to drink, saying, ‘Wait – let’s see if Elijah is coming to take him down. But Jesus, letting out a great shout, expired. (Mark 15:33-35)
After this, Jesus, knowing that already everything was brought to perfection, in order that the Scripture might be perfected, says, ‘I thirst’. A vessel lay there, full of wine vinegar. And so, wrapping a sponge full of the vinegar on a piece of hyssop offered it to his mouth. And when he had taken the vinegar, Jesus said, ‘It is perfected’. And inclining his head, he handed over the Spirit. (John 19:28-30)

Here we have two separate views of Jesus’s death, from Mark and from the Gospel of John. For Mark, the death is much bleaker, God’s view of it indicated by the ‘darkness…on the whole land’. Jesus’s view seems to be that God has utterly abandoned him (except that we have three times heard him predict that after his death he would be raised again). Even at the end he is misunderstood, and when he was calling on God they thought he was summoning Elijah!

John’s gospel offers us a much more regal death. Jesus is in total charge: ‘knowing’ is a favourite word of the fourth evangelist. He announces his thirst, as he had, long ago in chapter 4, to the Samaritan woman whom he asked for a drink (which he never received). Jesus announces that all is ‘accomplished’ (or ‘perfected’), and graciously bows his head and ‘handed over the Spirit’.

Does it matter to you that there are two different views of Jesus’s death in the gospels?

Have you ever known two different accounts of people’s death?

And how will it be at your own death?

Thirteenth Station: The body of Jesus is taken down from the cross and laid in his mother’s arms

There is nothing in the gospels about Jesus being laid in his mother’s arms, but since John has his mother standing at the foot of the cross, it is far from unlikely; and it was ‘women’s work’ in that culture to deal with the corpses. For our gospel text, here is another moment when Jesus was in his mother’s arms.

Joseph also went up from Galilee, from the city of Nazareth, to Judaea, to the city of David which is called Bethlehem, because he was of the house and family of David, to be registered along with Mary, his betrothed – who was pregnant. It came to pass while they were there that the days were fulfilled for her to give birth and she brought forth her son, the first-born; and she wrapped him round with swathing-bands, and laid him down in a feeding-trough, because there was no room for them in the lodging-house. (Luke 2:4-7)

This episode comes, of course, from the beginning of Jesus’s life. Then it had been a Roman emperor whose faraway decision had driven Joseph and his fiancée out of Nazareth down to Bethlehem. It is a shock to us to read that Joseph’s fiancée was pregnant, and it was shocking in that culture also. Nevertheless, we know that this is a shock that comes from God. But from confused beginning to sad ending this has been a shocking story, symbolised here by the fact that the baby has to be put into a ‘feeding-trough’, and that there is ‘no room in the lodging-house’.

Watch Mary as she touches her child for the first time and places him in this unpromising place. Then stand by her as she receives that same body from the cross, after his death, and ask what is going on inside her.

Can you put yourself in Mary’s place here, at either end of Jesus’s life?

What goes on in you as you watch these two moments, birth and dreadful death?

Fourteenth Station: Jesus is laid in the tomb

And when it had already become late, since it was Preparation Day, which is the day before the Sabbath, there came Joseph, the one from Arimathea. He was a reputable Councillor; and he was also waiting for the Kingdom of God. He was daring enough to go to Pilate and ask for the body of Jesus. And Pilate wondered if he was already dead (or: was surprised that he should be already dead). And he summoned the centurion and asked if he was long dead. And when he had confirmation from the centurion, he gifted the corpse to Joseph. And he bought a linen cloth and took him down and wrapped him in the linen cloth and placed him in a tomb which was hewn out of rock. And he rolled a stone onto the door of the tomb. (Mark 15:42-47)

Now the story comes to an end. The body has to be got rid of, because of the holiness of the Passover feast that is about to start. We are grateful for and surprised at the courage of this Joseph from Arimathea, a Councillor who had presumably been involved in the debates about whether Jesus should be murdered. It is brave of him to go to Pilate and demand the body (though some may feel that he would have done better to be brave during the discussions in the Sanhedrin). Once the death certificate is given, by the same centurion who had announced that Jesus was ‘truly the Son of God’, then Jesus is given an honourable burial, and a stone is put in place, to prevent his decomposing body being eaten by dogs or vultures.

And that is the end of the story: for a time it seemed that the Kingdom of God had arrived in the person of this rabbi who had power over disease and demons, who had such a magnetic influence on the crowds, and could even persuade people to leave everything and follow him. But he is dead now, an impostor like so many others, and his story is over.

Or is it? Is that death the end of everything? Is it the end of all your hopes as well? Or is it true what Christians have been saying ever since, that God raised Jesus from the dead, and that he is still with us? Because if that is true, then all our suffering and all the world’s pain finds its answer in the power of God’s love.

But is it true?

What do you think?