Skip to main content
From 'The Taking of Christ' by Caravaggio 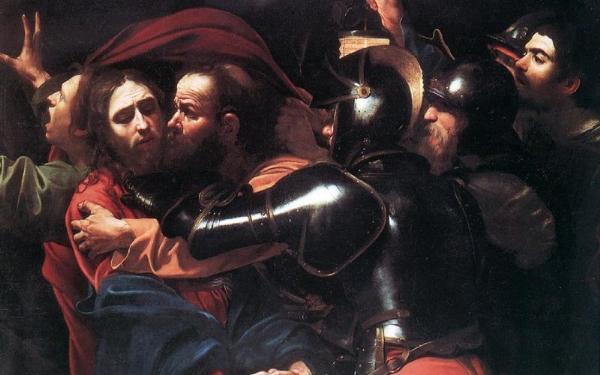 An introduction by scripture scholar Nicholas King SJ to his reflections on the Stations of the Cross, and the first and second stations.

The Stations of the Cross is a very old devotion; it may well originate in the desire of Christians to go on pilgrimage to Jerusalem, and be in the place where Jesus went to his death. Most Catholic churches nowadays will have ‘stations’ (the name means ‘stopping-places’), in the form of fourteen pictures or sculptures or engravings, or sometimes simple crosses, to allow Christians to pause (‘stop’) and enter reflectively into those last moments of Jesus’s journey of love, and to pray by imagining themselves in Jerusalem with him.

Over the centuries the number and format of this devotion has changed a good deal, but it has had its present form since the 15th Century.

How to pray the Stations

At each ‘station’ we very often begin by naming the station, and by saying ‘We adore you, O Christ, and we bless you’,to which others present may respond, ‘Because by your holy cross you have redeemed the world’. At the end of the station it is quite common to say a prayer such as the following:

I love you, Jesus, my love above all things,
And I repent with my whole heart of having offended you.
Never permit me to separate myself from you again,
Grant that I may love you always, and then do with me what you will.

Only use these prayers if they speak to you. What matters is that it should be a moment where your life meets with the unfailing love of God.

Not all of the stations are recorded in the scriptures; they owe much to the creative imagination of Christians who wanted to follow Jesus in this last journey of love. Nevertheless, I have suggested a suitable gospel passage for each station, taken from the recent translation of the New Testament, published by Kevin Mayhew. I suggest that you allow the passage to do two things: first, use your imagination to remain lovingly and attentively with Jesus in his passion. Secondly, try to link this with whatever is going on in your own life at present. Like Jesus, you are engaged on a loving journey towards the Father; like Jesus, you may well find yourself enduring terrible suffering. Or you may have in mind others who are suffering, perhaps people in your own circle. Or again you may want to pray, as you watch Jesus going to his unjust death, for the millions throughout the world who also lack their basic human rights, or who do not have enough to eat or drink.

Whatever you do, it is important to be honest in your prayer: as you watch Jesus going through this journey of love, tell him exactly how you feel (and how you would like to feel). Reach out to him, and let him reach out to you; and then allow his love to transform your life.

And so they led Jesus from the house of Caiaphas to the Praetorium. It was early in the morning. And they themselves did not enter into the Praetorium, so that they should not be defiled’ but [be able to] eat the Passover. And so Pilate came outside to them, and says, ‘What accusation do you bring against this man?’ They replied and said to him, ‘If this fellow were not an evil-doer, we would not have handed him over to you’. And so Pilate said to them, ‘You people take him – and according to your law judge him’. And so the Judaeans said to him, ‘It is not permissible for us to kill anybody’. [This was in order] that Jesus’ word might be fulfilled, signalling by what kind of a death he was about to die. And so Pilate went back into the Praetorium, and he called Jesus and said to him, ‘Are you the King of the Judaeans?’

Jesus replied, ‘On your own account do you say this, or did others tell you about me?’ Pilate answered, ‘Do you think that I am a Judaean? Your nation, and the High Priests, handed you over to me. What have you done?’ Jesus replied, ‘My Kingdom is not of this World. If my Kingdom were of this World, my servants would have struggled so that I should not be handed over to the Judaeans. As it is, my Kingdom is not from here.’ And so Pilate said to him, ‘Then you are a king, are you not?’ Jesus replied, ‘You say that I am a king. I was born for this, and for this I came into the world, that I might bear witness to the Truth. Everyone who is of the Truth listens to my voice.’ Pilate says to him, ‘What is Truth?’ (John 18:28-38)

Watch Jesus, and contrast him with the behaviour of all those around him. The religious authorities do not want to go into the Praetorium, so as not to ‘be defiled’; but planning murder might be considered sufficient defilement. Meanwhile Pilate scurries between the outside, where the noisy crowds are baying for blood, and the inside, where Jesus is all serenity and calm control. Pilate shows his inability to make anything of Jesus with the four rather despairing questions that he asks.

Does this episode echo in any way what is going on in your life at present?

Whose side are you on?

And he began to teach them that it was necessary for the Son of Man to suffer many things, and to be rejected by the elders and the high priests and the scribes, and to be killed, and after three days rise again. And he said the message openly. And Peter, taking him aside, began to scold him. And he turned, and, seeing his disciples, scolded Peter and says, ‘Get behind me, Satan. Because you are not thinking God’s thoughts but human thoughts.’ And summoning the crowd with his disciples he said to them, ‘If someone wants to follow after me, let them deny themselves, and take up their cross, and follow me. For whoever wants to save their life will destroy it. And whoever destroys their life, for my sake and for the sake of the gospel, will save it. For what use is it for a person to gain the entire world and suffer the loss of their life? (Mark 8:31-36).

And so they accepted Jesus. And carrying his cross for himself, he went out to the [place] known as Skull Place, which in Aramaic is known as Golgotha, where they crucified him, (John 19:17)

These two passages can be taken together. The first of them has Jesus, at Caesarea Philippi, after Simon Peter has correctly identified him as ‘the Messiah’, explaining that this Messiah has to suffer and to die. Peter objects to this (as we all object to it, if we are honest), and there is quite a tart little exchange between the leader of the apostles and his master. But we should notice that not only the Messiah has to go this way; so also have his disciples.

The second passage is from John’s gospel, and it shows an almost regal Jesus, carrying his own cross to the place of execution.

Do you find it difficult to accept that Jesus is a Messiah who must suffer and die?

Do you find it difficult to accept that Jesus’s disciples must also go that road?

What is there in your life at the moment that involves carrying the cross?