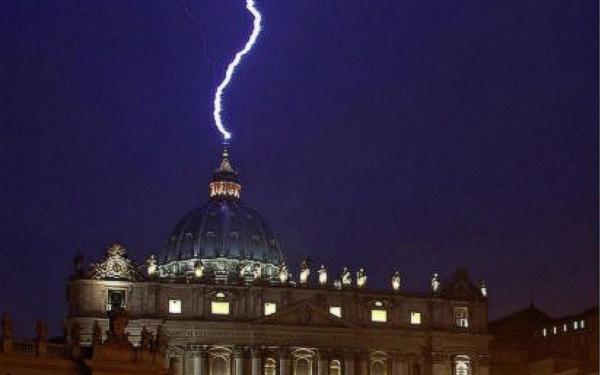 Since Pope Benedict XVI announced his resignation, it has been claimed repeatedly that this is the first such act in 600 years – but Thomas McCoog SJ argues that even Pope Gregory XII’s resignation in 1417 is not a real precedent for Pope Benedict’s decision. In fact, we have to go back to 1294 to find the only true historical precedent for the momentous event that takes place today...

The new famous photograph of the bolt of lightning illuminating the dome of St. Peter’s said it all. For once a picture was worth a thousand words. Pope Benedict XVI quietly announced his resignation on 11 February at a consistory convened to set the date for the canonisation of the martyrs of Otranto.[1] This short Latin statement was a bolt out of the blue, and would have astonished those who understood the language. Even experienced Vatican observers – perhaps not shocked by the resignation itself because some saw Pope Benedict’s acceptance of the resignation of Peter Hans Kolvenbach, SJ, the ‘black pope’, in 2006 as an omen – were surprised by the timing. The simple statement,

For this reason, and well aware of the seriousness of this act, with full freedom I declare that I renounce the ministry of Bishop of Rome, Successor of Saint Peter, entrusted to me by the cardinals on 19 April 2005, in such a way, that as from 28 February 2013, at 20:00 hours, the See of Rome, the See of Saint Peter, will be vacant and a conclave to elect the new Supreme Pontiff will have to be convoked by those whose competence it is

is a defining moment in the history of the Roman Catholic Church, and may eventually secure a place in the cultural memory alongside the abdication of King Edward VIII, the assassination of John F. Kennedy, the death of Princess Diana and the tragedies of 9/11 and 7/7.

Dusty tomes and forgotten manuals need not be consulted to ascertain precedents for the papal decision. We have at least three available and accessible histories of the popes and the papacy which an interested reader can peruse for more information on this glorious institution and its incumbents: J.N.D. Kelly and Michael Walsh, A Dictionary of Popes, 2nd ed. (Oxford, 2010); Eamon Duffy, Saints and Sinners: A History of the Popes, 3rd ed. revised (New Haven, 2006); and John W. O’Malley, S.J., A History of the Popes: From Peter to the Present (New York, 2011).

In the various newspaper accounts that have followed Pope Benedict’s announcement, two papal precedents are cited. We read that Benedict’s resignation is the first in six hundred years, the first since Pope Gregory XII stepped down in 1415. However, Pope Celestine V’s resignation in 1294 is a more accurate precedent. But each involved controversy.

For more than two years, factious cardinals divided by family ties and loyalties failed to elect a successor to Pope Nicholas IV (d. 4 April 1292). Political pressure and public disorder demanded the deadlock be broken. On 5 July 1294, the cardinals finally chose a man not associated with any faction: Pietro del Morrone, a devout, saintly hermit known for his cures and his dire prophesies if the Church remained without a head much longer. Despite being 85, he accepted the office after extreme protest. Accompanied by Charles II, King of Sicily and Naples, Pietro rode a donkey to L’Aquila where he was consecrated Celestine V. Some believed him to be the much anticipated ‘angelic pope’ whose reform of the Roman curia would inaugurate the age of the Spirit. He was, in fact, a puppet of King Charles. As the year ended, Celestine intended to transfer administration to a committee of cardinals in order to devote more time to prayer and fasting during Advent. He considered abdication because of opposition to this proposal. He consulted the canonist Benedetto, Cardinal Caetani, who misled him with assurances of precedents for resignation. In full consistory on 13 December, he removed the papal insignia and became once more Brother Pietro. His successor, Pope Boniface VIII (formerly known as Cardinal Caetani) blocked Pietro’s return to his hermitage in the Abruzzi, and kept the former pope under house arrest to prevent his being exploited to justify a schism. Brother Pietro escaped once for a few months. He died on 19 May 1296. The papacy of Boniface VIII was tumultuous. His attempts to resolve disputes between England and France earned him the hostility of King Philip IV of France. In the subsequent controversy, Philip, with no evidence whatsoever, held Boniface responsible for Celestine’s death. Boniface himself, having been mishandled by French troops, died on 12 October 1303. Two years later, Pope Clement V, a Frenchman, moved the papacy to Avignon.

The so-called ‘Babylonian Captivity of the Papacy’ at Avignon lasted until 1378. St. Catherine of Sienna, among others, exhorted the pope to return to Rome. Pope Gregory XI finally acquiesced on 17 January 1377. Gregory was French, as were almost all cardinals appointed by him. Anxious lest the cardinals elect someone who would return to Avignon, a Roman mob threatened the conclave convened to elect Gregory’s successor in April 1378. The crowd demanded an Italian, preferably a Roman. Intimidated by riots, the cardinals elected Bartolomeo Prignano, Archbishop of Bari, who was installed as Pope Urban VI on 18 April, Easter Sunday. Now disturbed by Urban’s plans for reform, especially a simplification of the lifestyle of the cardinals, they declared the election invalid: fear of violence restricted their freedom. They invited Urban to resign. His refusal resulted in their election of another, Pope Clement VII, and the start of the Great Western Schism. Urban in Rome and Clement in Avignon established a curia and a college of cardinals. They excommunicated each other and clamoured for recognition from European monarchs. England, Germany and most of Italy declared for Urban; France and Scotland preferred Clement.

Hope that the death of an incumbent would end the schism faded as each College of Cardinals elected a new pope. For numerous reasons, cardinals from both camps defected and convened a council in Pisa in March 1409, to end the schism. Pope Gregory XII, the Roman pope, and the anti-pope Benedict XIII, the Avignon pope, refused to recognise the council which then deposed each as an obstinate schismatic and heretic. The council elected (anti-pope) Alexander V on 26 June. Now there were three! The Roman popes are considered the authentic successors of St. Peter; the Avignon and Pisa claimants, anti-popes.

The apparent inability of the Church to end the scandalous division resulted in the intervention of a secular power. Sigismund, King of the Romans and future Holy Roman Emperor, insisted that the Pisa anti-pope John XXIII convoke a council to end the schism. In May, 1415 the Council of Constance deposed John XXIII, who, after initial resistance, acquiesced and later accepted appointment as cardinal bishop of Frascati from Pope Martin V in 1419. The Avignon anti-pope Benedict XIII refused to resign and was thus deposed by the council. He refused to comply and insisted on his pontifical status until his death in May 1423. The Roman Pope Gregory XII negotiated with King Sigismund and agreed to abdicate on specific conditions, the most important stipulated that he would convoke the council of Constance anew before his resignation. On 4 July 1415, Gregory stepped down with an appointment of cardinal bishop of Porto. He was ineligible for election as pope and was recognised as second only to the pope in precedence. He died in October 1417, a few weeks before the election of Pope Martin V ended the schism.

Canon 332 § 2 allows a pope to resign: ‘If it happens that the Roman Pontiff resigns his office, it is required for validity that the resignation is made freely and properly manifested but not that it is accepted by anyone’.[2] Pope Benedict stressed that his resignation was ‘freely and clearly manifested.’ By that same, albeit contemporary standard, Pope Gregory XII’s resignation would not be deemed valid because of the absence of freedom: if he had not resigned, he would have been deposed like the other two. Celestine V’s abdication therefore is the only true historical precedent.

Over the subsequent fortnight, the Vatican has clarified Benedict’s post-papal title, attire and residence. Unlike Gregory XII, Pope Benedict will not resume the title of cardinal when he retires, but will be known as His Holiness Benedict XVI, Pontiff Emeritus or Pope Emeritus. He will not be eligible for any office in the Roman Curia. The Cardinal Camerlengo will destroy the Ring of the Fisherman and the lead seal of his pontificate. He will continue to wear the distinctive white cassock without the mozzetta, the short cape that covers the shoulders, and without the red papal shoes. Once the renovations have been finished, he will reside within the Vatican gardens in Mater Ecclesiae, a former convent. It is suggested that he decided to remain in the Vatican instead of returning to Germany for reasons of security, privacy and immunity from possible lawsuits. Many feared the election of ‘God’s Rottweiler’ as Pope Benedict XVI; some remain angry because of his handling (or mishandling) of problems that plagued his pontificate. Others admire his intellect, his theological writings and his encyclicals. Perhaps we all can chant the Nunc dimittis and pray that God will allow this servant, a quiet man thrust into the international spotlight, to depart in peace.

Thomas M. McCoog SJ is the archivist of the British Province of the Society of Jesus.

[1] The martyrs have been all but forgotten in the subsequent stories and releases. Antonio Primaldo and two companions were martyred in Otranto on 14 August 1480 because of their refusal to convert to Islam after their city fell to the Ottoman Empire. Beatified in 1771, the next pope will canonise them on 12 May 2013.

‘The resignation of Pope Benedict XVI’ by Gemma Simmonds CJ

‘Time for a religious pope?’ by Gemma Simmonds CJ

‘To all people of good will’