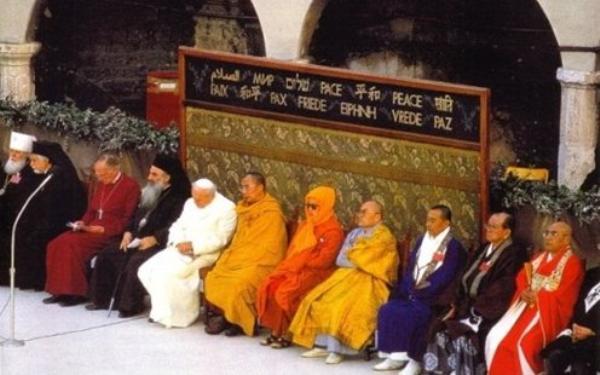 On Thursday 27 October Pope Benedict returned to Assisi to mark the 25th anniversary of one of the most remarkable events of his predecessor’s pontificate – a day of prayerful reflection for peace together with fellow Christians and members of other religious traditions. Michael Barnes SJ describes the way in which the visit highlights a continuity between the papacies of Benedict XVI and John Paul II, while the shift in focus of this event is indicative of their differences.

When Pope John Paul II met with leaders and representatives of faith communities in Assisi just 25 years ago the reactions were mixed. The sight of Catholic and Orthodox Christians, Muslims and Hindus, Sikhs and Buddhists, all standing in a semi-circle in the basilica dedicated to St Francis caught the imagination of the time. ‘We come together to pray’, ran the pope’s carefully phrased justification, ‘but not to pray together’. And indeed the event was notable not for any common act of worship, still less shared prayer formula, but for the profound silence of the moment – people of faith, differing enormously in their understanding of the nature of divine reality and human flourishing, yet joined together by their common humanity and concern for the peace of the world.

Yet there were also those who found the event difficult to take. The faith leaders may not have ‘prayed together’ but they certainly prayed. During the day different groups met in venues scattered through the town. An animist lit a ritual fire; a tribal chief invited spirits into a bowl of water; a Native American brought down a blessing with a movement of his eagle feathers. For a brief span, Assisi was a media paradise, filled with smoke and smells, reverberating to the sound of drums and tambourines, and peopled with exotic holy men in multi-coloured robes. There was an excess of symbolism; almost too much to take in. Small wonder that some critics were left with the impression that Christian and non-Christian elements were being mixed together indiscriminately.

Cardinal Ratzinger was not there. It would appear that, as prefect of the Sacred Congregation for the Doctrine of the Faith, he was concerned that the occasion might give rise to the charge of relativism. Were not Catholic claims to teach the truth about God revealed in Christ being compromised by an event which appeared to place all religions and cultures on the same level? Yet 25 years later, as Pope Benedict XVI, he called another such gathering. 27 October 2011 was advertised as a day of reflection, dialogue and prayer for peace and justice. With the theme, ‘Pilgrims of truth, pilgrims of peace’, and including Catholics, Christians from different ecclesial communities and representatives of the world’s religious traditions, it took the form of a common journey, starting out from Rome and spending the day in the home of St Francis, the great apostle of peace – and also, it must be added, a worthy patron of interreligious dialogue. The message was simple: every human being is a pilgrim in search of truth and goodness.

If the then Cardinal Ratzinger was bothered by the messages given off by the initial enterprise, why repeat the process – and what, if anything, does this one symbolise? In the first place, of course, popes are always anxious to keep continuity with their predecessors. Thus Benedict’s first public journey was to Poland. Since then he has sought to reaffirm the ecumenical and interreligious outreach of John Paul, but to give it his own stamp. Just as the visit to Auschwitz by a German pope had its own poignancy and special message, so his return to Assisi has its own nuances – some foreseen, others no doubt awaiting the dissection of professional Vatican-watchers.

Three points stand out from Thursday’s event. Most obviously, there was no public prayer. Instead the participants gathered at the end of the day for a moment of silence and testimonials to peace. A second shift was the programme itself; papal speeches and various responses highlighted believers' common responsibility to build a society based on truth. A third was that the participation was broadened beyond representatives of Christian communities and the principal religious traditions to include figures from the world of culture and science – people who, while not professing to be religious, regard themselves as seekers of truth and are concerned for the cause of justice and peace in the world.

It is this shift in context which deserves some attention. At the beginning of his address the pope appears to endorse Hans Küng’s oft-quoted mantra: ‘no peace among the nations without peace among the religions’. But very quickly he moves from the grand theme of violence and religion to something less obvious and, in the context of interreligious dialogue, more subtle: ‘a change in the spiritual climate’. Anti-religion, the strident voice of ‘militant atheism’ is posing a spiritual challenge which is every bit as dangerous as the corruption of religion by religiously justified terrorism. Today’s event, the pope says, is shared with post-modern intellectuals like Julia Kristeva who raise serious questions for believers and dogmatic unbelievers alike.

They are ‘pilgrims of truth, pilgrims of peace’. They ask questions of both sides. They take away from militant atheists the false certainty by which these claim to know that there is no God and they invite them to leave polemics aside and to become seekers who do not give up hope in the existence of truth and in the possibility and necessity of living by it.

But they also challenge the followers of religions not to consider God as their own property, as if he belonged to them, in such a way that they feel vindicated in using force against others. These people are seeking the truth, they are seeking the true God, whose image is frequently concealed in the religions because of the ways in which they are often practised. Their inability to find God is partly the responsibility of believers with a limited or even falsified image of God. So all their struggling and questioning is in part an appeal to believers to purify their faith, so that God, the true God, becomes accessible.[1]

It’s almost as if believers need thoughtful unbelievers in order to be honest in their faith. This riskier dialogue, based round a common commitment to human dignity and the claims of peace and justice over against ‘every form of destructive force’, reflects one of Pope Benedict’s priorities. Occasionally he expresses himself with an unexpected sharpness. On his recent trip to Germany, he shocked many listeners when he declared that agnostics who struggle with the question of God are closer to the kingdom of God than ‘routine Catholics’ whose hearts are untouched by faith.

Some, of course, will be disappointed that the dialogue between people of faith takes something of a back seat, that the opportunity for the witness of prayerful reflection – albeit in the ameliorated from of ‘coming together to pray’ – has given way to a more theological debate about the meaning of religion itself. Has not the powerful symbolism of 1986 given way to yet more routine speechifying which might just as easily, and more appropriately, have taken place in a philosophy of religion seminar?

Not exactly. Symbols are there not to provide some comforting spiritual penumbra which will isolate us from reality but to provoke thought and to take us back to reality with a more informed understanding of the world as it truly exists, The 1986 event was ground-breaking; only John Paul had the spiritual authority to make it possible. The symbolism he inspired lives on, a testimony to the power of ritual and prayer to witness to an inner truth and to shape outer, and more public, consciousness. Without that initial impetus, similar events in which people from different traditions come together to listen to each other in silence and to support each other in faith, might never have happened.

But it was also an event suited to that particular moment. In 1986, the focus was on world peace; John Paul called for a global truce that day and many governments in conflict areas publicly supported his request. As with many other events he made a mark. Benedict's agenda is different, in part at least because the context for dialogue has changed. For him peace-building is about more than negotiations between parties in conflict; it also involves a ‘constant struggle against evil’: religion, like any human construct, is open to corruption. Perhaps more importantly: for Benedict interreligious dialogue is about more than an improving exchange between like-minded individuals. It has a much more ecclesial, and therefore missionary, focus. Like a more distant predecessor, Paul VI in his amazing first encyclical, Ecclesiam Suam, he is concerned to enunciate the theological truth behind God’s own ‘dialogue of salvation’ with humankind. ‘No peace between the nations without peace between the religions’, opined Hans Küng. Papa Ratzinger, his old colleague from years back, might well retort: ‘No peace without the truth which only honest and sustained dialogue can sustain.’

Michael Barnes SJ lectures in the Theology of Religions at Heythrop College, University of London. He is the author of Theology and the Dialogue of Religions (CUP, 2002).

[1] Address of His Holiness Benedict XVI at the Meeting for Peace in Assisi, 27 October 2011, http://www.vatican.va/holy_father/benedict_xvi/speeches/2011/october/documents/hf_ben-xvi_spe_20111027_assisi_en.html