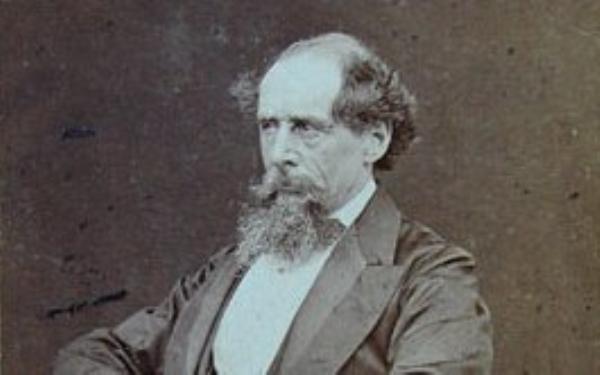 2012 has provided many opportunities to celebrate the work of one of the English language’s most renowned authors, and the creator of a host of memorable protagonists and villains. Ahead of the anniversary of Charles Dickens’ death on 9 June, Simon Potter explores the fortunate timing of his arrival on the literary scene. Two hundred years after his birth, why are we still so charmed by Dickens’ stories and characters?

Charles Dickens wrote at just the right time in the evolving history of the printed word. With happy serendipity, an eager readership, the means of bulk printing and a mechanism of distribution all coincided to make something large and unique – rather as Rice and Kellog’s invention of the moving-coil loudspeaker, the miniature thermionic audio valve, vinyl discs and widespread mains electricity made possible the later phenomena of Elvis, the Beatles and pop music.

Throughout the 18th century, the satirists, such as Pope in the 1730s, and the Romantics, such as Wordsworth in the 1790s, had accepted without question that the poem was the pre-eminent and obvious vehicle for moral commentary – a position lauded by Marvell in his mid 17th century poem, Tom May’s Death: ‘When the sword glitters o’er the Judge’s head/And fear has coward churchmen silenced/Then is the Poet’s time, ‘tis then he draws/And singly fights forsaken Virtue’s cause’ (II, 63-66). The assumption was that only a few would or could read such works as the Essay on Man or Lyrical Ballads – but then they would be the few who mattered. Christian teaching and its moral standpoint filtered down to the masses not from the pens of the poets, but via the pulpit and from the mouths of those neo-classicists steeped in the Horatian tradition who had gone from Oxford and Cambridge into the dog-collar. When less than a quarter of the population could read, there would have been little point in printing millions of copies of Lines written above Tintern Abbey, even if such numbers could have been printed.

The astonishing rise of the novel as the moral voice of the nation coincided, as things must do, with the available technology. Pope’s poetry was printed on presses not very different from the Caxton/Gutenberg ones familiar to Chaucer; Dickens’ novels were manufactured on rotary steam-powered presses, the vast rolls of paper for which came from Britain’s possession of millions of acres of pine-trees in Canada. Whereas a bare couple of hundred copies of the Lyrical Ballads were made, A Christmas Carol sold over 12,000 copies in its first few days.

Dickens’ work appeared first in magazine form and was later bound into complete books. The weight of all that paper could hardly have been distributed to the newly-capable countrywide readership from the universal schooling system by horse; luckily the recent railway network existed to do that useful task and W H Smith had fortuitously established his innumerable reading outlets at the new stations. In short, technical advance, distribution and popular skills had all come together between 1840 and 1870: the first great age of the English novel.

Dickens and his contemporaries; Thackeray, Trollop, George Eliot, Collins, were well aware of the responsibility that their access to people’s minds gave them, and all had inherited the 18thcentury conviction that writing should be a force for moral good. Such a belief did not necessarily go hand-in-hand with their own personal morality – Dickens’ well-known womanising and love of public adoration are witness to that – but it was (and is) important to disassociate the writer from his writings.

Pretty well everyone in the English-speaking world is familiar with Dickens’ stories and characters. He sensed the popular and eternal taste for the mix of the sensational and the sentimental and knew instinctively that people will not read if there is no entertainment value. Austen and Eliot were pre-eminently moral writers, but their characters and plots were not elemental enough, were too circumscribed and founded in a reality which dated them; this why the names of Casaubon or Lydgate are not in the public consciousness. There is, however, a difficulty about Dickens. The memorable creations that everyone loves are nearly all grotesques and morally bad: Fagin, Bill Sikes, Scrooge, Miss Havisham, Gradgrind, Mrs Joe, Pecksniff, Uriah Heep. These have a marvellous energy, but the good people are too often tiresome milksops: Little Dorrit, Little Nell, the Rev Crisparkle, Bob Cratchit, Esther Summerson, Sydney Carton, Biddy, Arthur Clennam. This is not due to any deficiency in Dickens as a writer; as C. S. Lewis has pointed out, the magnificent figure of Satan in Paradise Lost utterly dominates the emasculated Christ of Paradise Regained. Lewis believed that this oddity in fiction comes from the fact that we all know how bad we can be, but have no idea to what heights of goodness we can rise; thus we resonate most easily with the bad.

None of this blinds the reader to the obvious height of Dickens’ moral platform – he fights sloth, privilege, display, flummery, corruption, dishonesty, bullying, corporate greed, vanity and self-delusion in all their forms; and we are never (as in 20th century novels such as The Godfather or Fight Club) unclear as to whose side we are on.

Dickens’ sympathies are not necessarily closer to low-Church ideals than to high (think of all his absurd clergymen: non-conformist and Established Anglican), but are aligned most nearly to the gospels themselves. He effectively manages to appeal to the common humanity and love in us, which is where Jesus’s immediate appeals seem to lie. R. L. Stevenson wrote, after reading Dickens, ‘I shall do good, I want to go out and comfort… What a thing it is for a man to have written…and filled peoples’ hearts with pity!’

In doing through his fiction what Christ did in the gospel tales – associate with the outsider: Lazarus, simple fishermen, Samaritans, fallen women, doubters, children, the poor – Dickens created their 19th century fictional counterparts: Oliver, Nancy, Copperfield, Joe Gargery, Tiny Tim. They inhabited the 19th century’s equivalent of New Testament Pharasaic and Roman Palestine: the teeming slums of the new machine age, the heartless cupidity of Bounderby and Merdle, of Newgate and the Marshalsea prisons, the Anglo-Bengalee Assurance Co, the dead Utilitarianism of Lancashire mill towns, the sterility of the Inns of Court.

It occurred to me recently that there are surprisingly few names and dilemmas preserved forever, amber-like, in the English-speaking consciousness. Some of these pre-date Christianity, such as the tale of Helen of Troy; some come from the turn of the 19th and 20th centuries, like Sherlock Holmes or Superman. But, when you pause to think about it, there are not many between the gospel figures of The Good Samarian, Martha and Mary, Doubting Thomas, The Prodigal Son & Co, and Dickens’ creations – except, of course, those of Shakespeare. Like Christ, Dickens believed in the power of the obvious parable, which is no doubt why we remember them. As Chesterton put it: ‘we would not forget if we could... we could not forget if we would, [Dickens’] creatures who are more actual than the man who made them.’

Critics have, rightly, I think, suggested that the depth and reach of Dickens’ tales, so much more a part of our national identity than those of his contemporaries’ – and the happy coincidence that they came at a time when technology, distribution and education aided their diaspora – have helped to create the liberal, democratic, sceptical and reforming Britain in which we live. His attacks on the Law, on bankers, industrial magnates, on brutal city building, the hypocrisy of a moribund Church and professional philanthropists, on socio-economic cant and on unequal wealth distribution, resonate strongly today. So too does his (and our) fondness for the idea of innocent childhood, of unspoilt nature, of compassionate adults, free thinkers, the selflessness of lovers and an inexhaustible belief in the innate goodness of the common people.