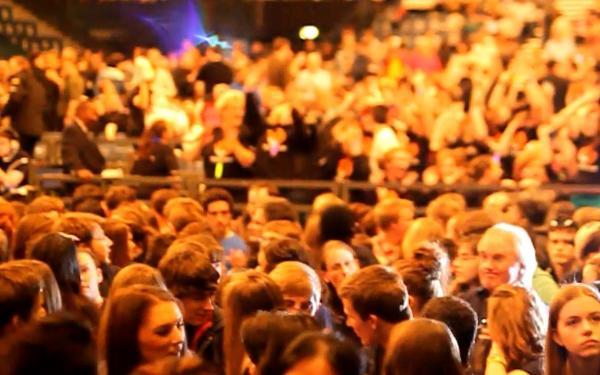 On 24 March 2012, thousands of young Catholics descended upon Wembley Arena for the Catholic Youth Ministry Federation’s Flame Congress, one of many events that will celebrate the partnership of faith and sport in this Olympic year. James Potter, chaplain to a Jesuit school in South London, was inspired by the enthusiasm he encountered there and hopes that this remarkable event will have been the seed from which many more similar initiatives grow.

Thousands of young people packed into Wembley Arena, many soaked to the bone after dancing in and out of fountains in the piazza outside. Once inside they might have seen a priest wearing a glow-stick halo; a band on stage rocking out Kings of Leon as well as lively worship music; a crowd bursting spontaneously into Mexican waves one minute and chanting ‘Jesus, Jesus!’ the next; and, almost certainly for the first time ever inside the arena, 8000 young people silent in adoration of the Blessed Sacrament. On 24 March 2012, Wembley Arena played host to this unusual, vibrant, faith-filled scene. Young Catholics from all over the UK came together to celebrate their faith and be inspired.

I admit that I was dubious about the Flame Congress. I have my doubts about big event youth ministry: no doubt the events are fabulous for those that go, but what about the majority that don’t? Do they feel left on the outside of something? Do they get forgotten? Far more worrying, was this congress going to be a flop? Were 8000 young Catholics going to have been hyped up, turning up lively and excited only to find themselves bored and rather less trusting of the adults that encouraged them to come along? Would it be overbearingly Catholic with only those deeply engaged in their faith being able to feel comfortable? Would it be a fun-filled day out but miss a huge opportunity to enthuse young people about their faith?

Thankfully, none of my fears were realised. The excitement and enthusiasm we were seeing on our Twitter feeds on the way to the event was still more than outweighed by the buzz and compliments that were pouring in at the end of the day. The day was a triumph and something that the organisers CYMFed (Catholic Youth Ministry Federation) and their collaborators can be rightly very proud of.

The day was slick. I was worried that things would drag and the attention of our teenagers would wane quickly if they were subjected to long talks. As it was, I don’t think any segment of talking lasted for more than 10 minutes and many were much shorter. This gave a snappy, fast-paced feel to the day and the organisers did well to find a mix of presentations that kept things fresh: drama, dance, interviews, testimonies, VT (as they say at the Oscars), live music, up-and-coming stars and young people who are doing inspiring things with their lives, including Olympians and Paralympians.

More than just a gathering of young Catholics, the concept of the day was to draw out the connections between sport and our faith, with a particular focus on the Olympics. It may seem as if the country is unable to do anything unrelated to the upcoming Games at the moment, but in this case the use of sport as a foundation for the day was inspired. It is a huge aspect of youth culture and so engages young people. In this way, the day embodied the incarnational approach advocated for in the fantastic ‘On the Way to Life’ document commissioned by the Catholic Bishops Conference of England and Wales in 2005, and expounded so well by Daniel O’Leary in his book, Begin with the Heart (a must-read for those involved in catechesis and youth ministry). I think this shows a confidence and maturity of approach that Catholic Youth Ministry has been gaining in this country. There was definitely an atmosphere of not being afraid to celebrate the ‘normal’ aspects of youth culture and embracing that graced vision that our Catholic sacramental faith brings to the way we live, enjoy and experience our world. The whole day was an expression of an often latent conviction of finding God in all things.

I thought the event was well-balanced and it catered for its diverse audience. There will have been young people there who were expecting more overt displays of religious zeal, who would maybe have enjoyed more in-depth, explicit, religious content – although maybe some of them have become too used to disconnected explicit religious content. I imagine the majority of young people were slightly nervous, not sure what to expect. Maybe some had their arms twisted a bit to go, having had no previous experience of big event Catholic youth ministry (at Lourdes or World Youth Day, for example), and suspected it might be a bit too religious and a bit too boring for them. The young people I took were certainly in this latter category but they came away happy, comfortable that what was expressed in the day was something they identified with and belonged to, and were inspired gently by the music, atmosphere and witness. For them, this was a gentle but firm sense of consolation.

If only more of our young people could experience this kind of event! The sense of fun and atmosphere of faith and friendliness was infectious and hugely attractive. I hope that this event gets repeated, and certainly there is a small army of young advocates who would provide better advertising than money could buy for a follow up. I also hope this will inspire people to run this sort of fast-paced celebration of our graced nature on more local levels, where more young people will be able to find an expression of their energy for life and fun within their faith, and experience being Church together in this energising, consoling and inspiring way.

The Eucharist and care of creation – an ancient perspective

The Bard and the Archbishop