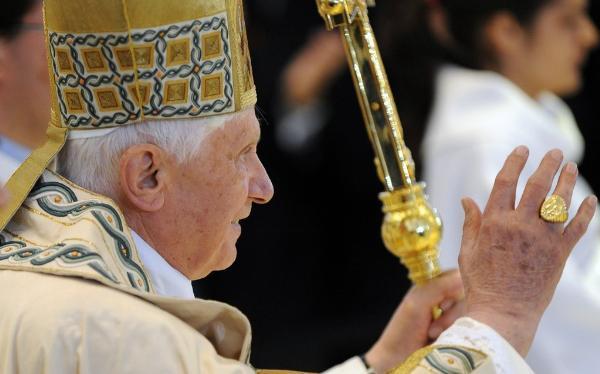 In an interview published this week as a book entitled Light of the World, Pope Benedict XVI makes some remarks about the use of condoms in the prevention of the spread of HIV which have been widely publicised over recent days. Anthony Egan SJ suggests that while the Pope’s comments do not, contrary to what has been reported, mark a break away from Catholic teaching, there is in fact a subtle innovation behind his words.

Has the Pope changed his mind? Are condoms OK? What about Humanae Vitae? These are the questions that many have asked since the release of Pope Benedict XVI’s remarks which have been published in a new book–long interview, Light of the World. I’d like to suggest that while Pope Benedict has not changed his mind about artificial contraception or even the usefulness of condoms in HIV/AIDS prevention, the new view is a substantial step forward for a number of reasons.

Let me approach this argument by examining three proposals.

My first proposal is that these new remarks entail no change to Humanae Vitae.The Pope has not abrogated the 1968 encyclical of Paul VI banning the use of artificial contraception. This teaching still stands, difficult as it is for some to accept. Indeed, if we look closely at the problem under consideration – that of the legitimacy or otherwise of the use of condoms to prevent the transmission of HIV given their function as an artificial contraceptive – we see that we are dealing with two different things altogether: contraception and prevention of disease. Pregnancy is not, and never has been, a disease. Nor does the prevention of conception prevent the transmission of HIV. Indeed, if we look at the example the Pope gives, he is using the case of a male (presumably homosexual) prostitute, where there is in fact no chance of the sexual act resulting in pregnancy – although the Pope's spokesman, Fr Federico Lombardi, has since reported to the media that he asked the Pope whether the gender of his chosen example was meant to be significant, and:

“He told me ‘No’,… The problem is this... It’s the first step of taking responsibility, of taking into consideration the risk of the life of another with whom you have a relationship… This is if you’re a woman, a man, or a transsexual.”[1]

Nor, it should be added, has the Pope declared condoms to be the panacea for the AIDS crisis. He clearly affirms in the interview that condoms should not be seen as the solution, or even as a major solution, to the problem. Abstinence and marital fidelity are the 100% certain solutions to the problem, he reminds everyone. Condoms are not 100% effective in the prevention of HIV infection and may give people a false sense of security that could encourage them to take unnecessary risks.

However, my second proposal is that a slightly different application of Humanae Vitaemight be in operation here. Until recently the suggestion was officially rejected by the Vatican that the use of condoms to prevent the spread of HIV was permissible under the exception allowed by Humanae Vitae with regard to the medical use of the Pill (for purposes of regulating menstrual cycles).

On the other hand, the Church does not consider at all illicit the use of those therapeutic means necessary to cure bodily diseases, even if a foreseeable impediment to procreation should result there from—provided such impediment is not directly intended for any motive whatsoever. (Humanae Vitae, 15)

What we see here is perhaps an acknowledgement of the classic doctrine of double effect, which might be simply stated as follows:

Applied to the question of condoms in prevention of HIV transmission, we can see in outline how this might work: the ‘bad effect’ (contraception) is not the means whereby the ‘good effect’ (prevention of HIV transmission) is achieved, but is rather a side effect of the intended good. My sense is that the Pope is in fact implicitly applying this clause of Humanae Vitae to the present situation, a point that seems to be borne out by Fr Lombardi’s recent clarification.

This is a welcome ‘innovation’ in magisterial teaching that brings the Pope into conversation with many moral theologians (conservative as well as liberal) who have been arguing this case for a number of years. Martin Rhonheimer, among others, a theologian in Rome and member of Opus Dei, articulated many of the points that the Pope has made in an article in The Tablet in 2004[3], in which he argued that the use of condoms for HIV prevention rather than with contraceptive intention did not violate Humanae Vitae:

Equally, a married man who is HIV-infected and uses the condom to protect his wife from infection is not acting to render procreation impossible, but to prevent infection. If conception is prevented, this will be an ‘unintentional’ side-effect and will not therefore shape the moral meaning of the act as a contraceptive act. There may be other reasons to warn against the use of a condom in such a case, or to advise total continence, but these will not be because of the Church’s teaching on contraception but for pastoral or simply prudential reasons, the risk, for example, of the condom not working.

My third proposal is that this teaching reflects a shift in official Catholic thinking and a re-engagement with Catholic moral tradition. What we see with the Pope’s statement is also an application of the principle of totality, where one looks at the overall picture of a problem in order to situate the morality of a controversial act. Let me use an example:

1. We all agree that amputation of limbs is bad, since it constitutes mutilation of a person.
2. Yet one may amputate a gangrenous limb in order to prevent gangrene spreading and to therefore save the whole body from death.
3. However we cannot say that even then the act of amputation is a positive good; it is in fact a lesser evil.

Now, these classical traditions of applying what might be called a contextual or historical consciousness to moral problems have not appeared to feature strongly in much official magisterial moral theology, particularly as it applies to matters of sex. Since HIV transmission is primarily sexual transmission, the ethics of the prevention of HIV transmission has until now been subsumed in, often confused with, the ethics of sex. And the ethics of sex have determined (and arguably limited) what was deemed by the Church to be morally acceptable with regard to the prevention of the spread of HIV. In Pope Benedict’s statement, we perhaps see an attempt to address the HIV crisis in its wider context.

Interestingly, pastors like Bishop Kevin Dowling of Rustenburg and numerous moral theologians[4] who have argued for a more flexible interpretation of the problem based on a wider reading of Catholic moral tradition – in line with such eminent Doctors of the Church as Thomas Aquinas and Alphonsus Ligouri – must now seem vindicated in their views. This may suggest a possible glasnost between the Vatican and such pastors and theologians. Rather than talk across each other, or even against each other, it may be that we are beginning to see a new modus operandi for those who share, teach and examine the Catholic faith: we talk to each other; we examine each other’s ideas in a respectful and collegial fashion. We even presume that each truly seeks both the Truth and the Good.

Despite what may seem to many religious ‘outsiders’ and liberals in the Church to be a fairly mundane and cautious innovation by the Pope, I would suggest that in my last observation there is reason for cautious optimism with wider applications than the HIV crisis alone.

Anthony Egan SJ is a member of the Jesuit Institute, South Africa in Johannesburg. He teaches at St Augustine College of South Africa (Johannesburg) and St John Vianney Seminary in Pretoria.

Christians and Sexuality in the Time of AIDS