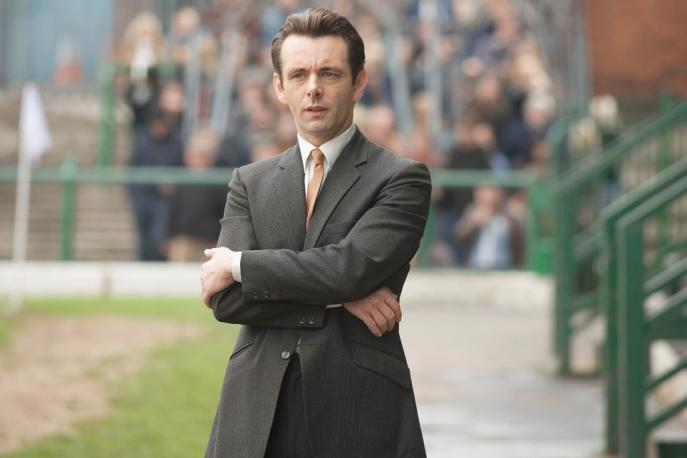 
In the unlikely event of anyone having missed the extraordinary hype surrounding The Damned United, you need to know that it tells the story of Brian Howard Clough, the charismatic and controversial football manager, and specifically of his disastrous forty-four day spell in charge of Leeds United in 1974. Based on the 2006 novel by David Peace, The Damned Utd, the film is the latest collaboration between writer Peter Morgan and actor Michael Sheen, following The Deal, The Queen, and Frost/Nixon). Definitely lighter in tone and less portentous than the book, there is, perhaps inevitably, some loss of subtlety in transition. To understand this last point, younger readers should know that during the period in question, Brian Clough’s media image as ‘Old Big ’Ead’ was in large part the product of TV impressionist Mike Yarwood. It is really quite difficult to assess the effectiveness of Michael Sheen’s portrayal of Clough, precisely because of Yarwood’s memorably bombastic caricature.

Peace’s novel probes the anguish underneath Clough’s bravado, which he attributes to the trauma of his early, career-finishing injury, and his obsession with being recognised by and emulating his predecessor as Leeds manager, Don Revie. Revie and Clough are ‘two peas in a pod’: both successful players, then managers, from the same north-east town. While Clough has plenty of other demons to combat, it is this Oedipal relationship with Revie which almost entirely dominates the film’s action, as Clough seeks to replace Don as the ‘father’ of the Leeds family. The other strand to the narrative is Clough’s turbulent working relationship with his long-time friend and assistant, Peter Taylor. Unfortunately, the presence of three excellent actors (Sheen, Colm Meaney as Revie, and Timothy Spall as Taylor) leaves little oxygen for the other characters of the film, mostly reduced to stage villains. Club directors, even when played by Jim Broadbent, are cloddish parochial northerners; the Leeds players are monosyllabic neanderthals. For all the distaste of Clough’s family towards the novel and film’s portrayal of their loved one, it is the families of Billy Bremner and Johnny Giles who will be feeling most hard done by.

There is one climactic scene which frustratingly falls short of the mark of authenticity, namely the Yorkshire Television interview after Clough’s sacking by Leeds, when he is confronted on air by Don Revie. The real event was far less confrontational, yet more richly tense and revealing than the cinematic version; it is a shame that an exchange which is, after all, indisputably in the public domain, was altered for the worse.

Nevertheless, the performances of the central trio are engrossing, and these alone will commend the film to those with little appetite for 70s football reminiscence. The final reconciliation between Clough and Taylor, in which Clough is made to ‘apologise unreservedly for being a twat’, is funny and moving. Here, Clough has come to the not unreasonable view that he has brought the Leeds catastrophe upon himself through his own folly and immaturity.

All well and good, affirming the likeability of Sheen’s Clough. By opting for this lightness of touch, however, the film chooses – probably wisely – not to go down the broad avenues which Peace invites when he describes his novel as ‘an English fairy tale’: ‘there is always a war coming, and England is always asleep’, he writes, with supporting references from Psalm 109 and the Book of Jeremiah. Compare this with the discussion of the recent Channel 4 movie trilogy Red Riding: based upon Peace’s novels, and also set in 70s Yorkshire, this treatment of police corruption and misogyny in the hunt for the Yorkshire Ripper and other cases has caused disquiet, for its blurring of truth and fiction. What are we looking for precisely, amid the flat vowels and the grey drizzle?

The Damned United suggests, but avoids, a wider canvass than one man’s footballing obsession with a more successful rival. English soccer, memorably described by The Observer a few years ago as ‘the game which ate itself’, continues in search of its lost soul. ‘A last, lost tribe of self-made Yorkshiremen’ in the boardroom; the Scottish, Irish and Welsh nationals who made up the bulk of the big sides of this era, including the great Leeds United; English managers in charge of the top teams – these dramatis personae of the film have all been swept away, by oligarchs, tycoons, and continental variations of ‘the Special One’. Damned, united indeed.

There is a morality tale to be told here, but Brian Clough’s spell at Leeds cannot be the heart of it. This was simply a massive car crash of an appointment, the wrong man for the wrong job. And too much gets glossed over – the excessive drinking, the hint of financial crookedness – in the lament that Clough was ‘the best manager England never had’. Aside from this, the film does well to content itself with an entertaining portrayal of an idiosyncratic figure: successful certainly, but ultimately marginal to the way the game has shaped up since, and unlikely to have been its Messiah, whatever his fans think. This is a film to be thoroughly enjoyed rather than pondered too deeply.

The Damned United - At UK cinemas from March 27th