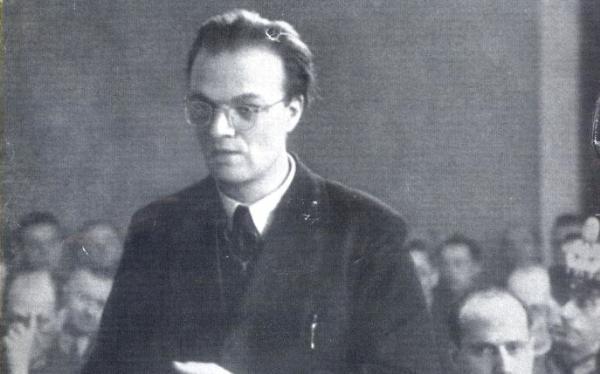 Sixty-five years ago today, a German Jesuit priest was executed as a traitor in Berlin for his continued and outspoken resistance to the Nazi regime. Michael Holman SJ introduces us to Alfred Delp, a man of remarkable faith and courage, whose radical commitment to following Christ even in life-threatening circumstances challenges us to hear and respond to the call of Christ in our own time.

Listen to a reading of Alfred Delp’s final letter to his Jesuit brothers.

Let me first set the scene. In July, I had gone up to Liverpool to make my retreat at the Jesuit Spirituality Centre, Loyola Hall, in the suburb of Rainhill. We Jesuits make an eight-day silent retreat each year.  We are, as one of our founder’s closest followers put it, ‘contemplatives in action’. So listening to God’s call in our lives and responding generously is what we are all about and this time of silence is one way of attuning ourselves to God’s voice amidst the many voices that shout all around us.

In the early days of that retreat, I was very much taken with something that a woman whom I admire very much had written many years ago, but they are words which apply just as much today.

Ruth Burrows is a Carmelite sister, a follower of Teresa of Avila, who lives in their convent in Quidenham, in Norfolk. She had written that ‘faith in Jesus is very, very rare’, by which I took her to mean not so much the intellectual assent to a God and to Jesus as the Son of God, but the kind of faith which allows Jesus, and the Gospel of Jesus, to take hold of our lives. That is the faith that Ruth Burrows says is ‘very, very rare’. For too many of us, faith, like much else in life, is compromised.

It was with those challenging words ringing in my ears that during my retreat I met someone.  Now that someone has been dead for sixty-five years now, but so vivid was the story that I read that it became something of a personal encounter.  You’ll probably know from your own experience how that can happen.  I like reading biographies of other Jesuits, I like reading about what it was that gave them life. So I picked up this biography of a man whose name I had heard often but about whom I knew precious little and I was fascinated by what I read.

Alfred Delp was born in southern Germany in 1907.  He was illegitimate; his parents married not long after he was born.  His mother was a Catholic but he was raised a Lutheran, the faith of his father. Later on in life, he wrote that ‘if ever they try and canonise me just tell them I was a brat’. He was wild and independent but it was that spirit which at the age of seventeen or thereabouts led him to decide for himself that he would become a Catholic, and which three years later took him into the Society of Jesus.

His training was much like my own half a century later, with the study of philosophy followed by the study of theology, with a period of three years working in a school in between.  The biography included photographs of Delp; I could see him in young people I had known myself, so modern did he look. When working in that school he liked to try things out, to spread his wings, to do things his way and to show he could succeed. All this annoyed his Jesuit headmaster who later became his Provincial! I too was once a headmaster and now I am Provincial, and yes, I have known Jesuits like him. There was much I could relate to in his story.

Alfred Delp was modern in another sense, too. He was very much taken up with the new humanism that was sweeping the Church in the pre-war years, as it would in the years before and after the Second Vatican Council, which he never saw. This humanism we must never lose sight of because it was forged in an age of so much human suffering which gives it a peculiar authority. It stressed the importance of the human person, the individual human person, the uniqueness and dignity of each person and the wonder of each person as God’s creation in God’s own likeness.

In his studies, Alfred became an expert in the social teaching of the Church, that ‘best kept secret’ of our Catholic tradition, and he was doing all this in the mid-thirties when his homeland was in the grip of Hitler and the Nazis. He did all this at a time when the totalitarianism of Russia and his own country emphasised ‘mass-man’ and put the rights and dignity of the individual at the service of the State.

Alfred was ordained priest in 1937 and after a while was sent to be pastor of a church that the Jesuits had responsibility for in Munich.  In 1941, the Nazis produced a propaganda film, explaining their policy of euthanasia, the ‘mercy killing’ of the handicapped. From his pulpit he denounced the film. He spoke of the importance of those living with disability, both as individuals and in terms of their significance in the community, and their significance in calling forth the best of human qualities – God-like qualities – in the rest of us.

Perhaps you would expect this kind of protest from a Catholic priest.  Living in circumstances such as those, what else would he do? Astonishingly, to many if not to most, things didn’t seem so clear. There came a time when the German bishops wanted to produce a report condemning euthanasia and the disappearance of so many people, among them so many priests.  Delp approved of a draft of the document, which was outspoken in its criticism of the regime. But the bishops were divided and feared an all-out assault on the Church. Moreover, Catholics fought in the army of the Reich so some thought this a time for patriotism. As the brave Bishop of Berlin put it, the final version ‘was dry cleaned, the spots removed and all the colour too’.

Towards the end of 1944, Delp was arrested and imprisoned. For two years he had been meeting with like-minded intellectuals, the so-called Kreisau group, planning the future of post-war Germany. He was now suspected of involvement in the assassination attempt on Hitler featured in the recent Tom Cruise movie, Valkyrie. He was charged with treason.

Friends brought bread and wine to Alfred in prison and he celebrated Mass. He kept the Blessed Sacrament with him always. In his laundry, his friends smuggled in a pen, ink and paper. He wrote a diary and a set of reflections on the Church and on society, which have proven extraordinarily prophetic. Writing of England all those years ago, he talked about it having lost its spirit and soul to materialism. But above all, these writings tell us of his struggle to remain committed to Christ, his temptation to compromise, his struggle to live knowing that ‘God alone suffices’, as Teresa of Avila wrote.

On 8 December, a Jesuit visited him in prison and, handcuffed, with tears pouring down his face, he made his final profession in the Society of Jesus.

In January 1945, he was put on trial.  They found no evidence for his complicity in the assassination attempt. But his judge was a fanatic Nazi who hated Christianity, hated the Catholic Church and hated Jesuits above all.  Delp was sentenced to death.

On 2 February, aged 37, he was taken to the Plötzensee Prison and that afternoon, in a room that is now a shrine, he was hanged from a meat hook in the ceiling. He was then cremated and his ashes were scattered over human sewage, as was required for traitors. His few possessions were collected together and presented to his mother who kept them under her bed in a suitcase until she died in 1967.

‘Faith in Jesus is very, very rare.’ It is granted to some to have their eyes opened and their ears unstopped so that they can read the signs of the times and hear the call of Christ. To even rarer ones is granted what is needed to respond with unspeakable love and generosity.

This kind of generosity is a flame that kindles other fires. Delp inspired heroism in many others.  He inspired his secretary who risked her life bringing a pen and ink in his laundry and distributing his letters. He himself had been inspired by another Jesuit priest in Munich, Rupert Mayer, who unlike Delp is now beatified by the Church for his uncompromising resistance.

But what fire does Delp’s flame kindle in us?  It makes me wonder the extent to which we are blind to the signs of the times and deaf to the call of Christ. How accustomed to compromise in our own times have we become? To what extent are we beguiled by the prevailing social consensus with the result that we blend in nicely with the countryside, but little more?

It was the assault on life that made Alfred Delp’s mission urgent. In our own times this same assault is considerable too – at the start of life and at the end of life.  In an over-commercialised economy with an over-individualised social policy, which has too little concern for its impact on our environment, the unique significance and dignity of each and every human life is being compromised.

Maybe something more radical is being asked of the followers of Christ today? Maybe we need our eyes opened, our ears unstopped and our tongues loosened? Maybe that is the way to our renewal as a Church in Western Europe? Lest it continue to be said about this generation that faith in Jesus is indeed very, very rare.

Michael Holman SJ is Principal of Heythrop College and a former Provincial of the British Jesuits.

Listen to a reading of Alfred Delp’s final letter to his Jesuit brothers.

The Personality of the Chaplain in Battle

St Henry Morse SJ: ‘A saviour of life unto life’
Fr Pedro Arrupe SJ
‘Give them something to eat’: The Christian approach to food aid
‘The Fight Between Carnival and Lent’
The Secret Life of Walter Mitty