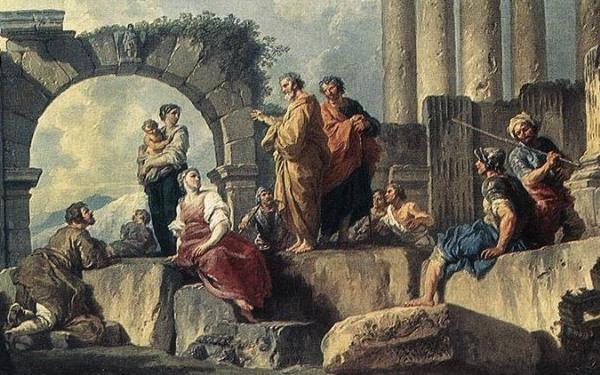 Thinking Faith’s series on Saint Paul continues as Michael Mullins looks at Paul’s Trinitarian theology and the emphasis on community in his writings.  What do his letters tell us about the way he structured his own faith and prayer, and how he tried to guide the early Christian communities that he wrote to?

For many of us, our attitude to St Paul has been formed by images from the history of Christian art, from school textbooks, films and TV programmes. Many theologians view Paul through the lens of the Reformation debates about Justification. Some people view him primarily as the one who tells women how to behave in church and in the home. The Pauline year affords us an opportunity to examine these grids through which we view Paul and come to a broader understanding of his contribution to the beginnings and ongoing life of the church.

There are two main sources for a study of Paul, the Acts of the Apostles and the letters of Paul. These sources are very different in genre and intent. The Acts of the Apostles gives a biographical account of Paul’s journeys, written by an admirer and probably one time travelling companion of Paul some twenty or so years after their completion, looking back on Paul through the lens of his overall achievement when Paul the person had become Paul the saint and founding apostle. It is written according to the norms and standards of historical writing in the first century. The letters, on the other hand, represent Paul’s own outlook, concerns, disposition, feelings and so forth during the actual circumstances and events of his life as they were actually taking place.

Some commentators refer to Paul’s experience on the Damascus Road as a conversion, some talk of his repentance, but Paul himself speaks of the moment in terms of a prophetic call in words recalling that of Jeremiah (Jer 11:4-5; Gal 1:15-16). It brought about a seismic shift in Paul’s understanding and a watershed in his attitudes. Acts gives three accounts of the event, the first a straightforward narrative, the other two in the form of a speech by Paul (Acts 9, 22 & 26) but Paul himself in his correspondence does not describe the event in narrative terms but rather speaks of it in terms of its significance for his life.

The impact of this experience of a divine call underpins the entire remainder of his life and work. He continually looks back on the significance of the event as he addresses the recipients of his various letters. He assures them that his authority comes not from any human agency but from God the Father and the Lord Jesus Christ. He is a prophet and an apostle. He, like the original witnesses to the resurrection, the original apostles, Mary Magdalene and the disciples on the road to Emmaus, can say: ‘ I have seen the Lord’.

Paul is a pioneer in the field of ecumenism. The call of God drove him from his comfort zone of self-assured understanding and attitudes to the world of ‘the other’; from then on inclusion of ‘the other’ becomes the keynote of his missionary activity. Having been brought up and educated as a Pharisee and having participated in the persecution of his fellow Jews – the Christian Hellenist Jews whose otherness was a threat to him and his understanding of his religious tradition – he responded to the revelation of the Risen Christ who confronted him with the realisation that in persecuting the Christians he was persecuting Christ himself. From then on Paul is determined to see ‘the other’ in a whole new light.

Inclusion rather than exclusion of ‘the other’ takes centre stage in his preaching and understanding. The awareness of Abraham as father of all believers and the fulfilment of the promise to Abraham that in his posterity all nations would be blessed becomes central to his thinking. He wrote to the Galatians: ‘There is no longer any distinction between Jew and Gentile, slave or free, male or female; all belong to Christ, posterity of Abraham, heirs of the promise.’(Gal 3:27-29).  To the Colossians he (or a disciple of his, writing in his name) wrote ‘There is no room for distinction between Greek and Jew, between circumcised and uncircumcised, between barbarian and Scythian, slave and free man. There is only Christ. He is everything and in everything.’ (Col 3:11)

Paul’s experience gives him a theological understanding which is fundamentally Trinitarian, as is obvious from the following selection of teachings from his letters.

Faced with division in the church at Corinth and a rejection of his version of the gospel in Galatia, Paul responds with clarifications of what he sees as the essentials of his gospel and in his responses we find the emerging Trinitarian structure of faith and prayer.

Christ is for Paul the one and only foundation of the church and of his own faith and preaching. In writing to the Corinthians he expresses great surprise at the fact that divisions have occurred and factions formed around different versions of or emphases in the gospel. He reacts to the slogans ‘I am for Paul, I am for Apollos, I am for Cephas’ with an emphatic ‘I am for Christ’ (1 Cor 1:12). More specifically, Paul points out that Christ crucified is ‘the wisdom and power of God’ even though he may be ‘a stumbling block for the Jews and foolishness to the Gentiles’ because of the expectations of a powerful Messiah by the Jews and the exalted status given to a philosopher and wisdom teacher by the Greeks (1 Cor 1:22-25). In writing to the Galatians he points out clearly the life-giving power of sharing in the crucifixion of Christ: ‘I have been crucified with Christ, and I live now not with my own life but with the life of Christ who lives in me.’(Gal 2:19-20)

For Paul, conversion to Christ or baptism in Christ’s name entails not only a cancelling out of past sins but it also marks the beginning of a new life in the Spirit. He tells the Corinthians that we are ‘washed clean, justified and sanctified through the name of our Lord Jesus Christ and through the Spirit of our God’ (1 Cor 6:11) and later he writes to the Romans: ‘If the Spirit who raised Jesus from the dead is living in you, then he who raised Jesus from the dead will give life to your own mortal bodies through his Spirit living in you’ (Rom 8:11). He tells the Romans that the Spirit helps us in our weakness, for when we cannot find words in order to pray properly, the Spirit himself expresses our plea in sighs too deep for words (Rom 8:26).

Paul points out to the Corinthians that no one can say ‘Jesus is Lord’ unless that person is under the influence of the Holy Spirit (1 Cor 12:3). In his letter to the Galatians he states: ‘The proof that you are sons is that God has sent the Spirit of his Son into our hearts: the Spirit that cries, ‘Abba, Father’, and it is this that makes you a son, you are not a slave any more; and if God has made you son, then he has made you heir’ (Gal 4:6-7).  Similarly in his letter to the Romans he points out that everyone moved by the Spirit is a child of God and that the Spirit makes us cry out ‘Abba, Father’, and goes on to say that ‘we are children of God and heirs as well, heirs of God and coheirs with Christ, sharing his sufferings so as to share his glory.’ (Rom 8:14-17).

Paul focuses also on the fact that the Spirit is teacher and guide. Writing to the Corinthians he states that God teaches us through the Spirit (1 Cor 2:10-12). He tells the Galatians that we are directed and guided by the Spirit (Gal 5:16,25). This is an understanding very close to the understanding of the role of the Spirit in the gospels (Mt 10:20; Mk 13:11) and it is especially close to the teaching of John’s gospel (Jn 14:26; 16:13-15).

The church is the continuation of Christ’s presence in the world. Paul builds on this insight in his teaching that members of the community should function in mutual dependence and harmony like the parts of a human body (1 Cor 12:12-30; Rom 12:4-8). The author of Acts spells this out dramatically in the words of Jesus in the three accounts of the Damascus Road experience which clearly identify Jesus with the community: ‘You are persecuting me’ / ‘Why are you persecuting me?’ (Acts 9:5; 22:8; 26:14 ).

The words ‘called’, chosen’, ‘loved’ and ‘holy’ are repeatedly used to express the ‘covenantal’ and grace-filled nature of the community’s relationship with the Father, Son and Spirit. In his first letter to the Thessalonians, Paul tells them that they are called and chosen (1 Thess 4:1-12). In his letter to the Romans he points out that they are ‘God’s beloved in Rome, called to be holy / saints’ (Rom 1:7). Central to the functioning of the community as the Body of Christ is the presence of the Spirit, the giver of gifts for the building up of the community (1 Cor 12-13; Rom 12:6-8).  There are many gifts but one Spirit. As stated already, that Spirit is the Spirit that enables us to proclaim Jesus is Lord and to cry ‘Abba, Father’.

Paul returns again and again to the question of harmony and mutual upbuilding in community. Writing to the Corinthians he emphasises the gifts that build community, summing them all up under the rubric of love (1 Cor 12:13; cf Rom 12:6-8). To the Romans he writes about ‘genuine love’ (Rom 12:9-21) and to the Philippians he writes about humility as the underlying virtue underpinning all others in community (Phil 2:1-11). To the Galatians he writes about life in the Spirit as opposed to licentiousness and self-indulgence which destroy individuals and communities (Gal 5:13-26). Gentleness and forgiveness are highlighted in Colossians (Col 3:12-17). The Pauline tradition reaches a great climax in Ephesians with its extraordinary emphasis on unity as God reveals the mystery of his purpose to ‘bring everything together under Christ, as head, everything in the heavens and everything on earth’ (Eph 1:9-10).

In the rapidly changing society of the Roman Empire, Paul and the guardians of his legacy in the Deutero-Pauline letters, aimed to maintain Christian harmony in the home and liturgical assembly by setting the established social norms ‘in Christ’. The social structures and accepted roles of husband and wife, master and slave have radically changed since then but the love, mutual respect, co-operation and harmony which Paul sought and set in the context of Christ and his kingdom, are still a challenge to us today in our family and social relations.

Michael Mullins is a priest of the diocese of Waterford and Lismore, Ireland. He is currently Associate Professor in the Theology Faculty at  Maynooth where he teaches Sacred Scripture. He has published a number of books and articles, among them commentaries on the gospels of John, Matthew and Mark.